Gigabyte, a leading manufacturer of motherboards and graphics cards, launched the new AORUS Liquid Cooler Series for superior cooling of the fastest high-end CPUs. Following the success of the ATC800 Cooler, AORUS has upped its cooling game by introducing the first AIO cooling solution to the ever-expanding AORUS lineup. Presented in 3 radiator sizes, 240/280/360 and with full support for Intel 2066, 2011,1366,115x and AMD TR4, AM4 socket CPUs, AORUS Liquid Coolers are compatible for a multitude of builds. In true AORUS fashion, AORUS Liquid Coolers fuse functionality and gaming aesthetics with features such as dual ball-bearing structure fans and a circular LCD display pump cap, customizable with AORUS ENGINE and RGB Fusion 2.0.

Multi-core CPUs and higher core counts are the norms for high-end builds in this day and age but faster clock speeds can generate excess heat which slows performance. This makes CPU Cooling more important than ever so AORUS Liquid Coolers are designed specifically to handle the heat generated by latest generation CPUs. With an Asetek Gen6 Pump and AORUS designed fans that deliver ultra-efficient and silent cooling, CPUs cooled with new AORUS Liquid Coolers run fluidly even under task heavy loads.

Additionally, all 3 radiator sizes have been tested and fitted with the proper fan blade sizes to ensure the best match for high cooling efficiency. Under Prime95 testing and at max RPM, AORUS Liquid Coolers tested up to 7% cooler than other AIO coolers in the market when running Intel i9 9900K CPUs at all cores 5GHz+. 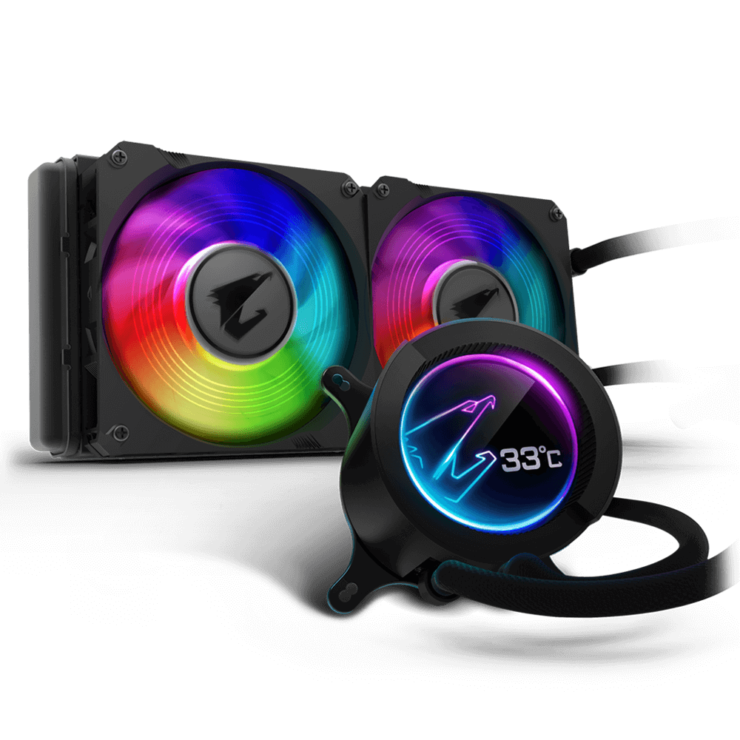 AORUS Liquid Coolers sport a dual ball-bearing fan structure that has superior efficiency and durability, with double the service life compared to sleeve bearing structure fans. The unique fan blade design reduces the unwanted noise associated with higher fan speeds, striking the best balance between fan efficiency and fan noise. The fan center is lined with ARGB for smooth lighting effects so when the fan is running, RGB lights up your system.

“The release of our ATC800 Cooler earlier this year was met with praise and we have followed through with a cooling solution for fans of AIO cooling,” said Jackson Hsu, Director of the GIGABYTE Channel Solutions Product Development Division. “The universal design for fan & pump RPM control allows for the new AIO coolers to work with motherboards from all brands.”

At the centerpiece of the AORUS Liquid Cooler design is the stylized, circular LCD display pump cap with vibrant, gamer aesthetics that users can customize to their liking to deck out their system. The LCD pump cap features four unique modes/tools to choose from including the Enthusiast Mode, Function Mode, Custom Mode, and Display Rotator for users to display CPU model information, related fan performance data, or even custom images and text. With the Image Rotator, users can rotate their own LCD images in the best style they see fit.

All of the most important data related to your fan’s cooling performance is accessible and displayed prominently for users to view and passersby will be impressed by the stylish design of the pump cap LCD. The textured aluminum extrusion design of the pump cap not only gives the cooler a sleek look but nicely complements gaming motherboards. 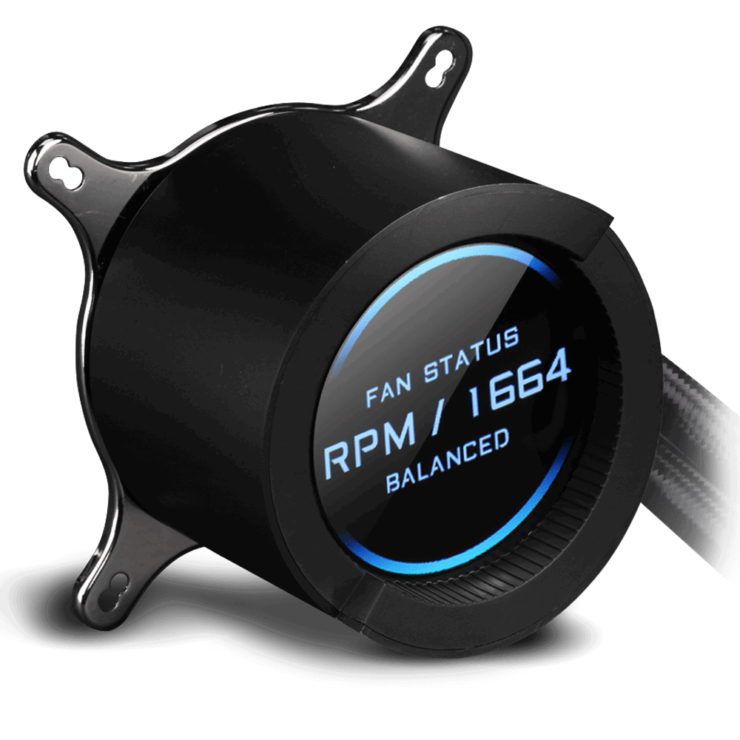 AORUS ENGINE allows users to select CPU model name/clock rates/temps/fan RPM/pump RPM to display on their LCD pump cap, giving them full control over the status of each metric. Text and image files can be displayed on the LCD and controlled with AORUS ENGINE. Fans and pump RPM come with the silent fan function and can also be adjusted accordingly with the new application. Furthermore, the control users have over their system extends to RGB Fusion 2.0, which allows users to sync up the RGB functions on their peripherals.