Gears of War 4 Performance Review – Forget about the Ultimate Edition 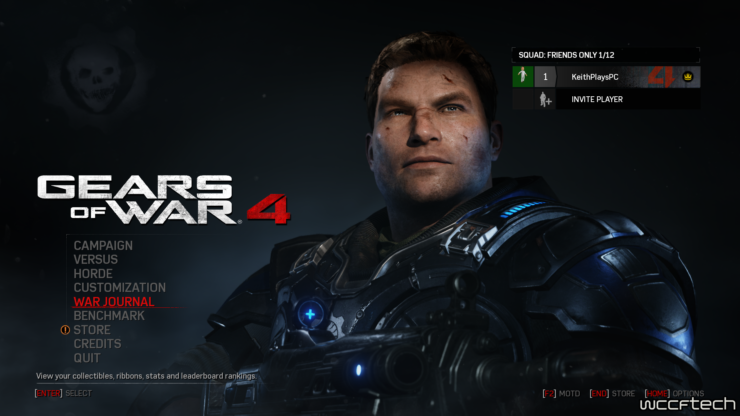 Okay, I get the concern. After the multiple botched launches on the Windows Store regarding UWP titles, including the Gears of War Ultimate Edition, you have every reason to be concerned about the launch of Gears of War 4. Thankfully, this time they pulled it off. Gears of War 4 is running in full DX12 glory, featuring implementations such as excellent multi threading, tiled resources, and even that magical Asynchronous Compute functionality! For those wanting to dig in an really see what all is going on with the settings the guys over at NVIDIA did a full breakdown of each setting and even the impact of those settings when used with a GeForce graphics card.

Thankfully for our testing as well as yours at home, if you care to join in with your results in the comments, The Coalition has included an excellent built in benchmarking utility. After playing about 5-6 hours of the campaign with various cards I found the built in benchmarking utility to be very consistent with real world gaming scenarios within GoW4 so we felt confident in relying on the numbers it gave us so that we could deliver as many results and conduct as many tests as possible.

I have to applaud The Coalition for avoiding the 'absolute minimum' FPS trap.  The reason I say this is because the absolute minimum could be a wild outlying frame that you may not even notice. It's the amount of time that the FPS stays around those low that become important. In most of our testing we strive to show the 1% and .1% lows, but The Coalition does a great job with at least providing the 5% lows which is fairly representative of what you'll see when gaming.

Testing was all completed on the standard test system that we used where we completed three runs with each graphics card and took the average of the Average frame rates as well as the 5% minimums. All of the tests were run at the standard 'Ultra' setting and making sure to disable the game's built in dynamic resolution scaling to ensure that the game was running at its true resolution. Another thing of interest is that if the card supported it and the option was present Async Compute was used for all of these tests.  Unfortunately, this option was missing for all of our Maxwell cards, but did show and was functional with our GTX 1060. Settings that were used can be found below. 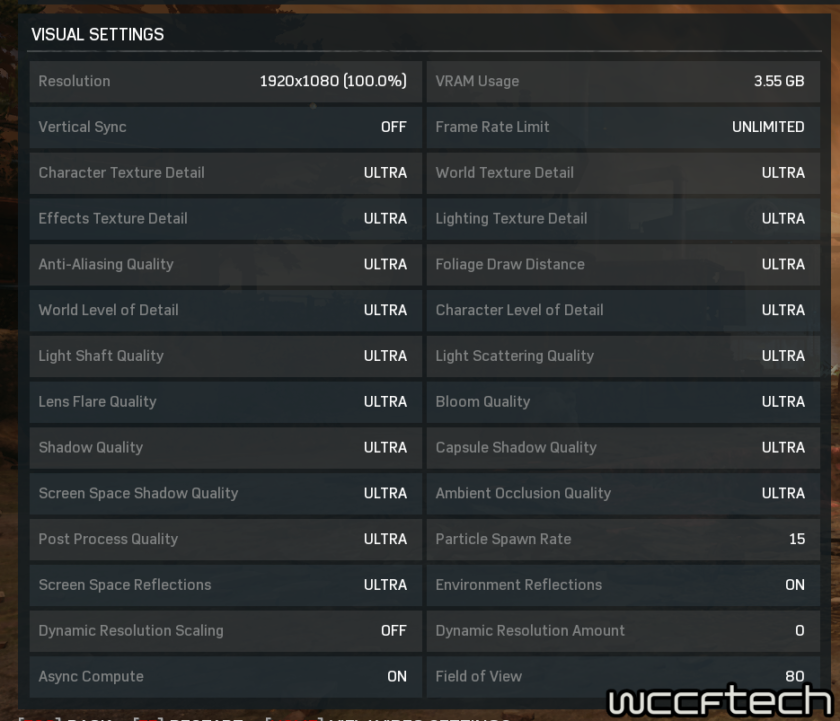 Getting To The Results with 1080p

Starting things off with 1080p testing, we felt it relevant to show how this game can run on entry level hardware. This is a section that we hope to keep going forward in testing and can maybe give a little tease of our upcoming Sapphire RX 460 Nitro Review.  For the entry level testing, we kept a separate chart where these cards were tested at a modest 'medium' preset to simulate what people would most likely use for these cards.

But kicking things into high gear for the full suite of graphics cards at 1080p Ultra resulted in surprisingly good performance across the board with pretty much every mid range cards not falling under 60fps for the 5% minimum. Something to keep in mind is that, even at 1080p, Gears of War 4 loves VRAM. Easily chewing up 4.6GB when using the GTX 980ti, but managing to hand the 4GB limit of other cards by keeping that limit in check with the R9 Fury X only consuming 3.62GB of VRAM. 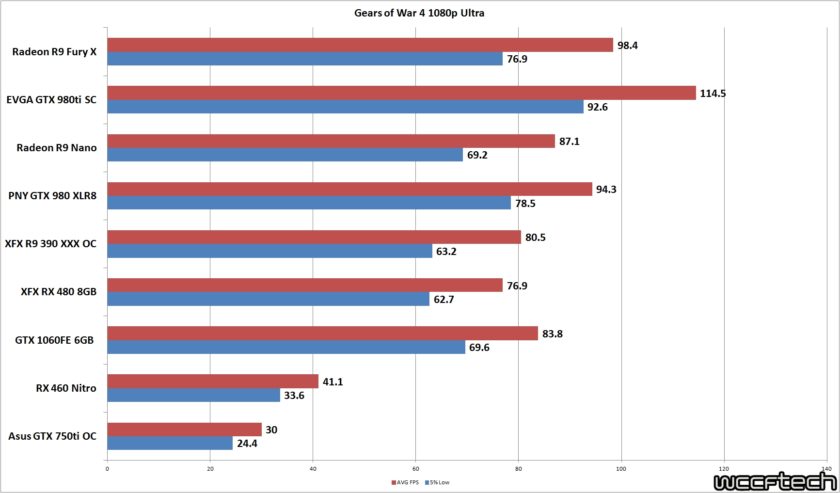 Stepping up your game to the quickly becoming standard 1440p and it starts to get pretty rough out there. We start to see things get a fair bit more difficult to push resulting in a pretty big hit with only our GTX 980ti able to maintain that greater than 60FPS 5% minimums. Interestingly enough the VRAM usage didn't go up by as much as expected with the GTX 980ti only up 300MB to 4.97GB of usage while the R9 Fury X remained at the 3.62GB wall. 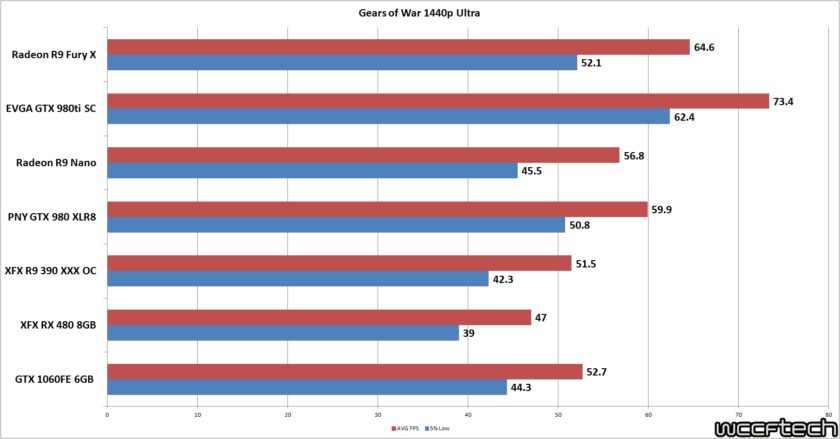 Okay, 4k on the graphics cards we have with this game set to Ultra is a bit out of reach, but it's always fun to see just where they would all land. If you're okay with staying close to 30FPS then either the GTX 980ti or the R9 Fury X are gonna be the bare minimum to pull that off, otherwise stay at a lower resolution or take advantage of that negative resolution scaling option to help bolster a few more frames out of the game. VRAM is in high demand here with the GTX 980ti being able to swallow up 5.25GB easily. 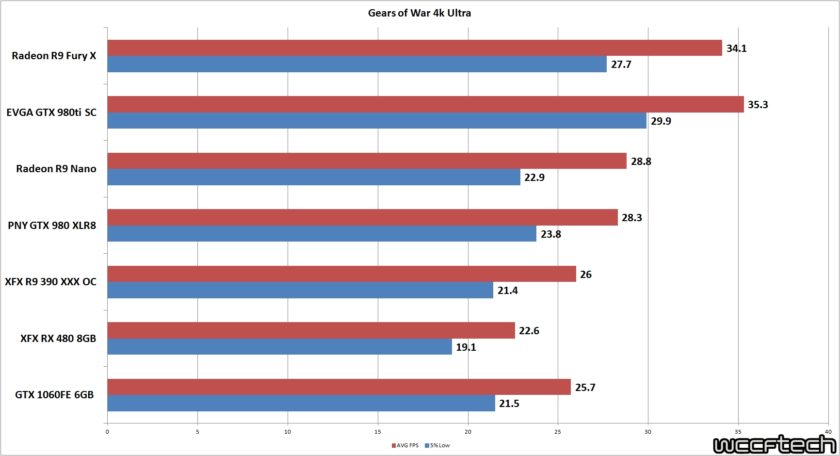 Asynchronous Compute shows up again. A great feature of DX12 that has been a point of contention among many people.  Mostly because of the way it's handled by the graphics card manufacturers. One handles it primarily on the hardware side while the other handles it on the software side. We're not here today to debate who is good, bad, right, or wrong. We're here today to ask and answer: Does it work? The short answer is yes, it does work. But, it's not a game changer for Gears of War 4 in the same way that it is in games like Ashes of the Singularity or DOOM. Digging a bit deeper we feel that tiles resources seem to be more influential on this game's performance. After all, under the setting for Async Compute the performance impact is rated as 'minor'.

What About CPU Cores?

Another aspect of DX12 that many were looking forward to was the efficiency that the API would bring to multi core processors. More cores the better, right? Well, to find this answer we took the i7 6800k that we use in our test system and broke it down to a dual core and worked our way back up to see just how much of an impact core and thread count made on this game. Pairing up the GTX 980ti to force as much discrepancy as we could, we found that even a quad core is going to be a bit of a hold for higher end GPUs. Seems like the argument for 8 threads is becoming really compelling. Interestingly enough the drop in FPS we saw with full 12 threads enabled was consistent, that one might need a little more digging, or perhaps an improvement beyond 8 threads could be patched in.

Gears of War 4 is a massive improvement over the initial Windows Store launch of GoW: UE. Coming hot on the heals of the excellently performing Forza Horizon 3 the signals are clear that someone is listening. A game as beautiful and detailed as this one is able to run great on all mainstream graphics cards we tested at 1080p, even allowing for the entry level market to get a taste of the action with lower detail settings. Supporting up to 4k and out the gate compatibility for 21:9 monitors, The Coalition clearly built this game for the PC and it's not a lazy port at all.

Unfortunately mGPU support is absent at launch, but we've been ensured that it's coming 'soon'.  One thing we left out of these tests were the "Insane" settings, mostly because these are outside of the realm of the typical gamer and as stated by Mike Rayner they are forward-looking for future hardware.

"Technical Director Mike Rayner describes these settings: “The game will scale with new hardware that will come out. You need a really high spec to get in there. It looks awesome, but it’s very GPU-hungry”. "