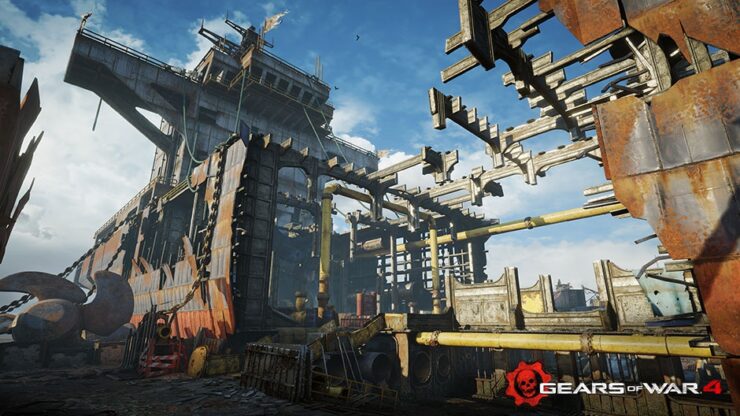 The Coalition just announced a pair of new legacy maps coming to Gears of War 4 November 1st for Season Pass holders. Two of the more popular maps from Gears of War 3 make an epic return to Gears 4 map roster.

The first map, Checkout, is the supermarket from Cole Train's hometown. Twenty-five years after the events of Gears of War 3, overgrowth has pretty much taken over the place. Aside from the greenery, it's still the same map we've played a few years ago where the boltok pistol can do some serious damage.

The second map, Drydock, a huge ship scrap yard with a lot of nooks and crannies you can use for cover. The layout itself makes it a perfect place for some Horde mode.

Drydock and Checkout will be available in Versus Dodgeball and Arms Race modes for teams up to three and Horde players on Normal difficulty in the Developer Playlist period.

Season Pass holders will be to play these legacy maps on November 1st on the early access Developer Playlist. Checkout and Drydock will make it to the free public playlists on November 8. Every month two new maps will be coming in as a free update. Last week, The Coalition stated in the next update will address things like balance issues and quit penalties.

Gears of War 4 is currently available on Windows 10 and Xbox One. Be sure to check out our review of Gears of War 4 where Rosh Kelly says it's a good mix of old and new. Also this month, El-P and Killer Mike from Run the Jewels will be in Gears of War 4 as playable characters in the November update.

If you want early access to the maps, be sure to pick up the Season Pass for $49.99 that includes a boatload of digital items like Vintage VIP pack , characters skins and XP boosts. The Coalition will keep pumping out two new maps per month, as promised before the release.