GameStop, AMC Short Sellers Recover $1.5 Billion Of Losses In Blink Of An Eye

The ongoing battle between retail investors and hedge funds took another turn last week when the latter managed to recoup some of their losses from short-selling shares of GameStop Corporation (NYSE:GME) and AMC Entertainment Holdings, Inc (NYSE:AMC). As we covered earlier, these losses amounted to a staggering $12 billion, as mouth-dropping share price gains for both resulted in the short sellers having to cover their bets.

Now, within a week, the field has titled slightly in favor of retail investors who have managed to recover some of their losses in the light of downward share price movements at the end of last week. For example, after its share price peaked at $59.40 on Tuesday, AMC dropped to $42 on Thursday and managed to recover only some of the losses as it closed on $49.40 on Friday. Similarly, GameStop peaked on Tuesday and started a downward spiral from Wednesday when its share price dropped from $324 to close at $233 on Friday.

Data courtesy of S3 Partners reveals that by the end of Thursday, GameStop's short sellers had recovered $923 million of their losses. Previous data had shown that by the end of Tuesday, Short Interest in GameStop stood at $3 billion at the end of Tuesday. It bloomed to $3.4 billion within days, along with a corresponding increase of roughly 500 million in shorted shares. By the end of Thursday, short-sellers had reduced their year-to-date GME losses by $840 million after they gained $923 million during Thursday's trading. By then, year-to-date losses stood at $6.51 billion instead of the $7.33 billion just a handful of days back.

For AMC, the picture is slightly different despite an upward share price momentum last week. By Thursday, short interest had dropped by roughly $150 million but owing to a lower price, overall shorted shares grew to 69.9 million from 65.5 million on Tuesday. 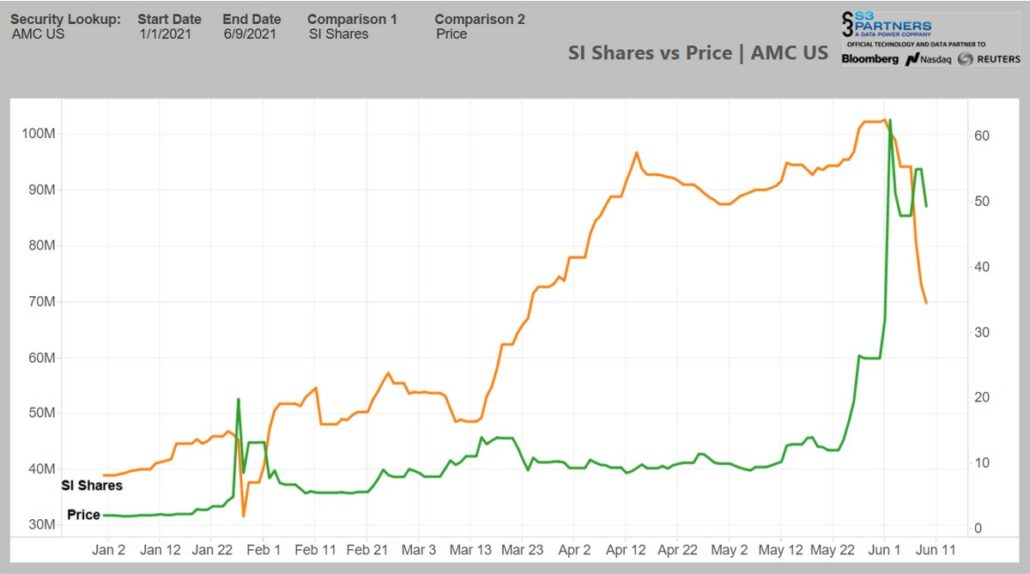 Like investors who had shorted GameStop shares, those betting against AMC had a small respite as downward price movements on Thursday resulted in an overall $456 million gain. Prior to this, year-to-date losses for these funds amounted to $4.49 billion, and following the price drop, these losses reduced to $3.99 billion. More importantly, within a couple of days, the shares shorted down had increased by five million, indicating that some funds had an inkling of the impending price drop.

As a result, short-sellers betting against AMC and GameStop has lost $10.5 billion year-to-date and successfully recovered $1.5 billion within the few days of last week. Whether they will make further gains or if social media retail investors will once again unite to boost the two companies' prices further is uncertain.

For now, premarket movement in both companies is not impressive and reflects a handful of purchases hoping that a price increase yields a small profit. Even as short-selling comes with its own sets of risks, share price pumping through social media carries with it its own risks as well. For retail investors to successfully increase a company's share price, all of them must make purchases simultaneously and then hold their ground. If they fail to do this, then the share price might drop, and those who bought at a high can witness serious losses. Since retail investors often use their savings for these investments, their losses are often more painful than those born by the hedge-funds, who have often placed 'counter' bets to cover their losses in the case of unfavorable price movements.