The battle between retail and institutional investors, which started with video game retailer GameStop Corporation earlier this year and extended to entertainment firm AMC Entertainment Holdings, Inc (NYSE:AMC), has resulted in massive losses for hedge funds who had placed bets expecting the pair's share prices to drop.   Data revealed by analytics firm S3 Partners shows that since the start of this year, investors who bet against GameStop (NYSE:GME) have lost $7.3 billion, and those who bet against AMC have lost $4.5 billion. Cumulatively, the losses amount to roughly $12 billion and demonstrate the impact of social media platforms in encouraging retail investors to unite and create upward stock price movements.

Since the start of this year, GameStop shares have gained a staggeringly eye-popping 1,700% in value after they opened for $303 per share today. GameStop, a company many believe, runs on an outdated business model due to the prevalence of digital game downloads and poor financial results, started the year with a share price of $17.25, with things coming to a head in late January when its share price touched $343.

Data shared by S3 revealed that since the start of the year, short-sellers betting against GameStop have lost an equally staggering $7.3 billion. It also shows that roughly 70 million GameStop shares were shorted in January, a figure that has dropped by 86% to stand at 10 million shorted shares as of this week. During the first quarter of June, the short-sellers have lost close to $1 billion through mark-to-market losses of $856 million.

If you thought GameStop made eye-popping gains during the year, hold your 'shorts' (if we must) for AMC. At the start of this year, the theater firm had a share price of $2/share. Today, AMC opened at $52, marking for roughly 2,300% in year-to-date gains. 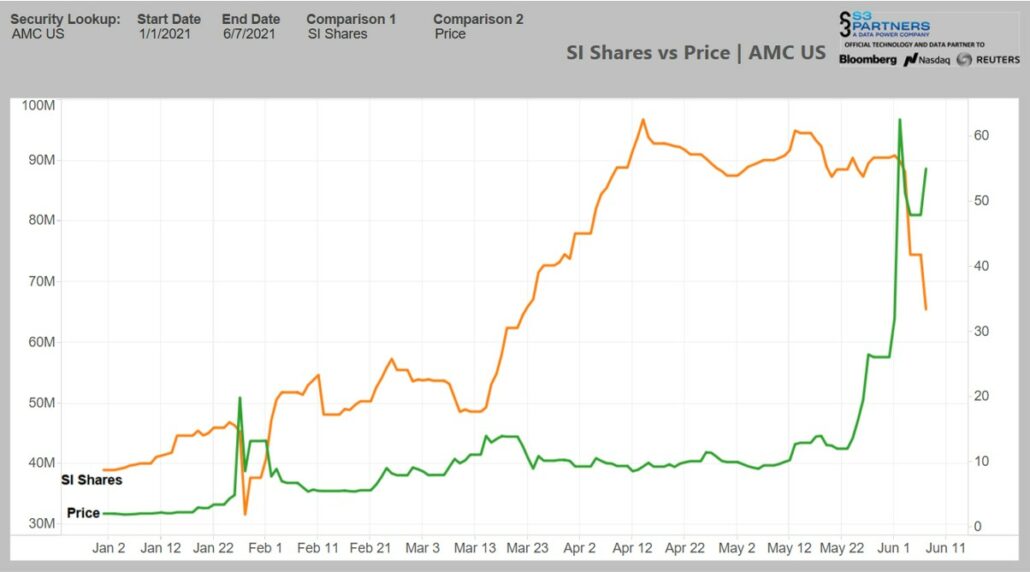 For AMC, the picture for the short-seller is far bleaker than the one for GameStop. S3's data reveals that at the start of this month, 90 million shares were sold short. Within a week, this figure has dropped to 65.5 million, as shown in the graph above. Year-to-date losses absorbed by the short-sellers now amount to $4.5 billion, but the shares sold short are still significantly higher than they were at the start of this year. Short sellers might also have a small breath of relief today, as during trading., AMC is down by 10% at 11:41 EDT.

The upward price momentum exhibited by both is in contrast to what their fundamentals suggest. AMC revealed $143 million in revenue at the close of its latest quarter, down from the $942 million it brought in during the year-ago quarter. GameStop's in a slightly better position, as even though its revenue remained flat year-over-year during its previous quarter, net income or bottom line profits increased to $81 million from $21 million at the end of the year-ago quarter. The company, it seems, is benefiting from new gaming consoles from Sony Corporation and Microsoft Corporation, and a key question surrounding its future is whether this reversal will improve and sustain.

Both AMC and GameStop fall in the category dubbed by the market as 'meme stocks.' These are stocks that have unified retail investors on social media platforms such as Reddit, who proceed to buy shares in an attempt to force upward price movement and create losses for hedge funds. Unfortunately, the price movements are separate from the firms' fundamentals. As a result, some investors who fail to sell their shares after the initial rush of buying often find themselves with unexpected losses.