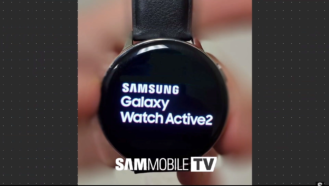 The smartwatch will reportedly have an ECG app, similar to Apple’s Series 4 Apple Watch. ECGs help determine irregularities in a person's heartbeat. An irregular heartbeat is an indicator of several health disorders, some of which are fatal.

However, a smartwatch-mounted ECG's accuracy is nowhere close to that of an actual ECG and the results are to be treated as such. The watch is merely a reminder for the user to seek professional help and there is even an option to send the data gathered by the watch to your physician for further analysis.

Apple was required to obtain FDA clearance to include ECG functionality in the Apple Watch and it’s very likely that Samsung will also need to do the same. The process can be time-consuming and if Samsung hasn't gone through with it already, the watch's release date may get pushed by a few weeks/months.

The Galaxy Watch Active 2 will reportedly feature Fall Detection too. Fall Detection displays an alert on the screen and vibrates the watch if the device detects a hard fall while on your wrist. The watch then lets you contact emergency services or contact of your choice via a single tap.

Fall Detection is useful in situations where a person gets hurt and is unable to reach their phone for whatever reason. If the smartwatch doesn’t get a response in a pre-determined period of time, it will automatically call emergency services and send messages to the user’s emergency contacts.

The original Galaxy Watch Active was released earlier this year, and many argue that it is too early for its successor to make its way to the market. Samsung is yet to acknowledge anything about the Galaxy Watch Active 2, so all we have at this point are leaks.