At this point, it would be more than safe to say that Samsung is not in the mood to go ahead and plug the leaks for the Galaxy Watch 5 series along with their foldable devices because we have been seeing a myriad of leaks about the devices and at this point, there is nothing about these phones that we do not know. Today, we have our hands on the high res images of both of the watches n full.

The images come as a courtesy of Evan Blass, as he has published the images of the Galaxy Watch 5 and Galaxy Watch 5 Pro on 91Mobiles; the Watch 5 can be seen in Bora Purple, Pink Gold, and Graphite. However, the watch will also be available in Blue. As far as the pro variant is concerned, you can take a look at in Black and Titanium variants, which is excellent, to say the least.

Have a look at the renders below. 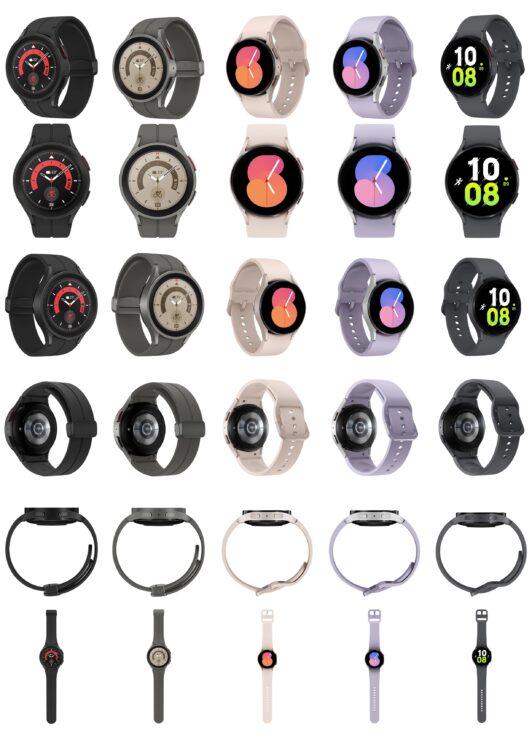 Based on the previous leaks, the base variant will be coming in 40mm and 44mm sizes while the pro variant will be shipping in larger 45mm size. Both watches will be available in Bluetooth and LTE variants and they will be running a new version of Wear OS on top of the One UI watch interface.

As far as the specs are concerned, you are looking at the temperature sensor that is expected. you also get an IP68 rating for dust and water resistance, barometer, blood composition sensor, ECG, GPS, gyro, along with other connectivity offerings such as NFC and more. The best thing about the Galaxy Watch 5 series, at least for me, is that Samsung has decided to use standard strap options, which means that if you want to, you can replace the strap with something that is a lot classier, which is always good. You can also get a really good battery life from the smartwatches.

The new watches  along with the Galaxy Z Fold 4, Z Flip 4, and the new Galaxy Buds Pro will be coming out at Galaxy Unpacked on August 10th, later this month.