We are allegedly only two months away from Galaxy S22's official unveiling and well, it is time to get the rumor mill started. Yesterday we talked about the supposed official wallpapers for all three devices, and now we have the first "official" look at the camera housing of the Galaxy S22 series, and well, things are not as surprising as one would have thought.

The leak is coming from Weibo and it shows the tempered glass camera protector of all three devices. Now, the standard Galaxy S22 and the Plus variant look a lot similar to the ones that we have seen on the Galaxy S21. However, the Ultra variant has a P-shaped housing, which might disappoint a lot of people including me because the Galaxy S21 Ultra had one of the best-looking camera arrays. 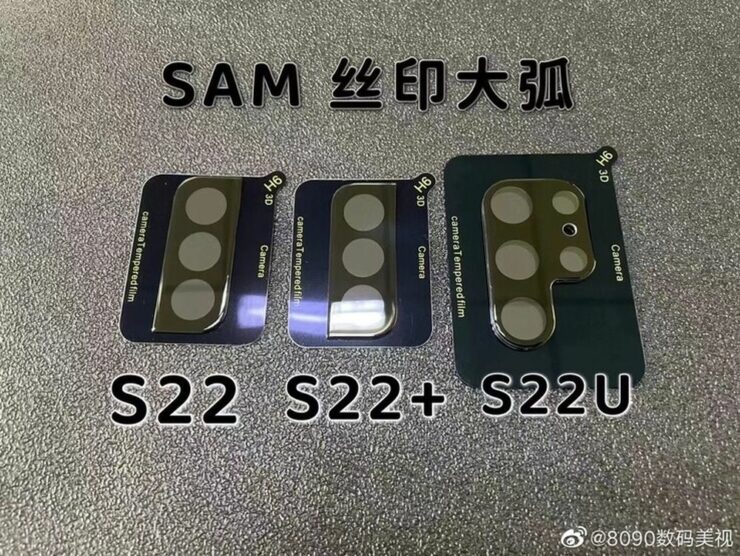 There is no denying that the P-shaped camera has received a mixed reception from almost everyone who has seen it and to be honest, it does look like a downgrade, as well. Something that you would see in a mid-range phone.

Whatever the case might be, we are not sure if Samsung is planning on changing it, either and we can only tell what is going to happen when the phones go official in February 2022.

Do you think Samsung should stick to this design or up their game with something new and improved? The Galaxy S22 series is supposedly going official in February. Just a month after the Galaxy S21 FE. Let us know your thoughts on this new discovery. Now, the reason why the housing for the S22 Ultra does not make any sense is that it does not align with the real-world leak that we saw a couple of months ago.