Many have considered the Galaxy S20 Ultra's $1,400 price to be a tad high. But, just how much does it take Samsung to manufacture one. The folks over at Tech Insider did a deep dive into the phone's components and found out that it doesn't cost Samsung as much as we thought it would.

It takes Samsung about $529 to manufacture one Galaxy S20 Ultra 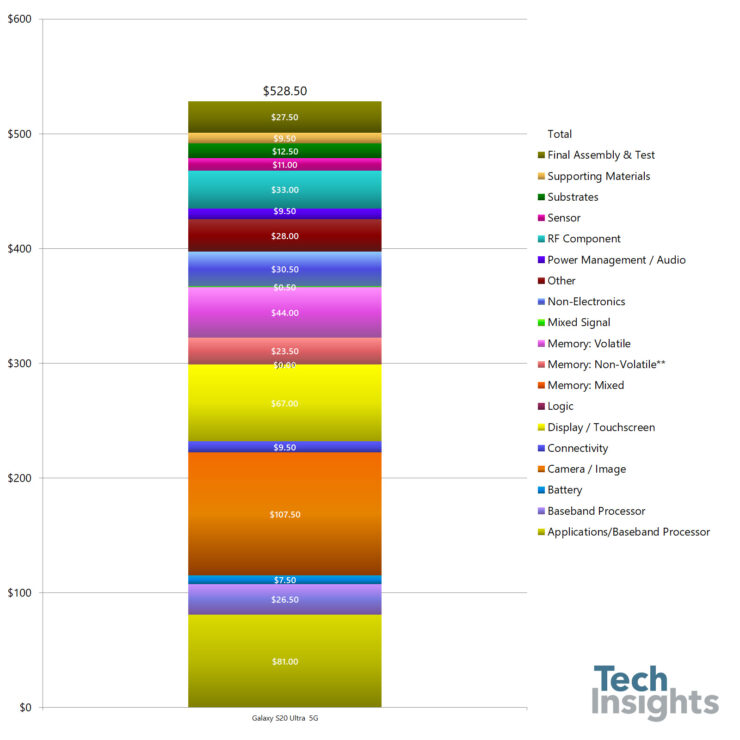 Bear in mind that this cost is only for the materials involved. It does not take into account labor and other overheads. Samsung has put all its eggs into the Galaxy S20 Ultra's camera basket. So, it didn't surprise us when we found out that Samsung had allocated nearly a fifth of the phone's total manufacturing costs towards its cameras. They cost $107.50 per unit, for those who are curious.

One would expect the display to be the second most expensive part, but it isn't. This particular teardown was done on an LTE-only variant of the Galaxy S20 Ultra that ran an Exynos 990 chip. As a part of its pricing strategy, Samsung reserved these devices for markets where 5G connectivity is yet to arrive. It costs $81, and it the second most expensive part of the assembly. A Snapdragon 865 chip is likely to cost more, driving up the cost further. Finishing third is the display assembly, which costs $67 in total. Try and not think about this the next time Samsung asks you for ~$40 to replace a screen.

Once again, it is vital to assert that these estimates do not reflect the actual cost of production. There are a lot more expenses involved behind the scenes, and there's no way for a third-party to know about those. For the sake of brevity, let's round off all costs at $700. That still leaves a margin of $700, a significant part of which Samsung probably spent on marketing. It'll be interesting to see how much the base Galaxy S20 and Galaxy S20+ cost, in comparison to the Galaxy S20 Ultra.