The Galaxy Note 5 is Samsung's latest flagship phablet to make an entry into the market, and the company has high hopes that it would deliver in places where the Galaxy S6 and Galaxy S6 Edge failed to. While there are a ton of new features under the hood, coupled with an all-new design, the big question in everyone's mind is: how well does the device fare when it comes face to face with concrete? A newly published video aims to answer that question and even compares the results with the Galaxy S6, iPhone 6 and the HTC One M9. 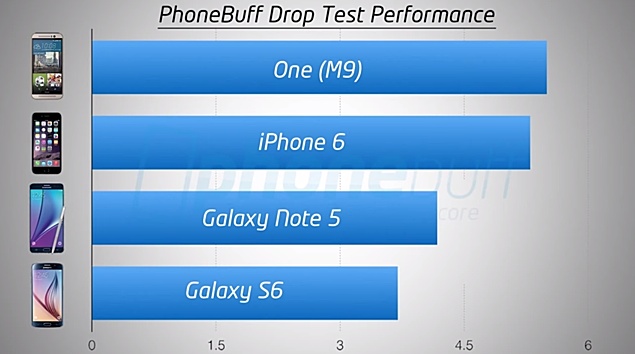 If you're thinking at this point that the Galaxy Note 5 is as tough as it looks, then you will be thoroughly disappointed to learn that it's not, and by a huge margin, which makes it even more disappointing. In fact, it only just fares better than the Galaxy S6, but absolutely falls to shame when compared to the iPhone 6, and the HTC One M9. In fact, the HTC One M9 is the toughest of all these devices, all thanks to its solid aluminum construction.

The Galaxy S6 is no superman material phone, and upon hitting concrete, Samsung's flagship from earlier this year died in an instant, with shattered front and back glass. But sadly, the same case follows with the Galaxy Note 5. If you're thinking to buy the Korean phablet flagship then you have to very much promise yourself that you will never ever drop the phone on concrete. Either that, or always wrap your investment around a protective case.

The video by PhoneBuff is just over four minutes long, and we recommend that you check it out in its entirety and see how the device performs in a controlled drop test.

Long story short: if you're getting a Galaxy Note 5 and have a knack for dropping your gadgets, then be sure to invest in a decent enough case to protect your investment, otherwise you'll end up with a shattered piece of glass.

The Galaxy Note 5 is a big release for Samsung because the company has a lot riding on it, mainly because the Galaxy S6 and Galaxy S6 Edge failed to do wonders like the Korean giant hoped it would.

The Galaxy Note 5 goes on sale on August 21st and is available in multiple storage and color options and is packed to the rafters with a ton of great features, and if you want to read all about it, then be sure to check out: Samsung Galaxy Note 5 Announced: Specs, Features, Price, Release Date.