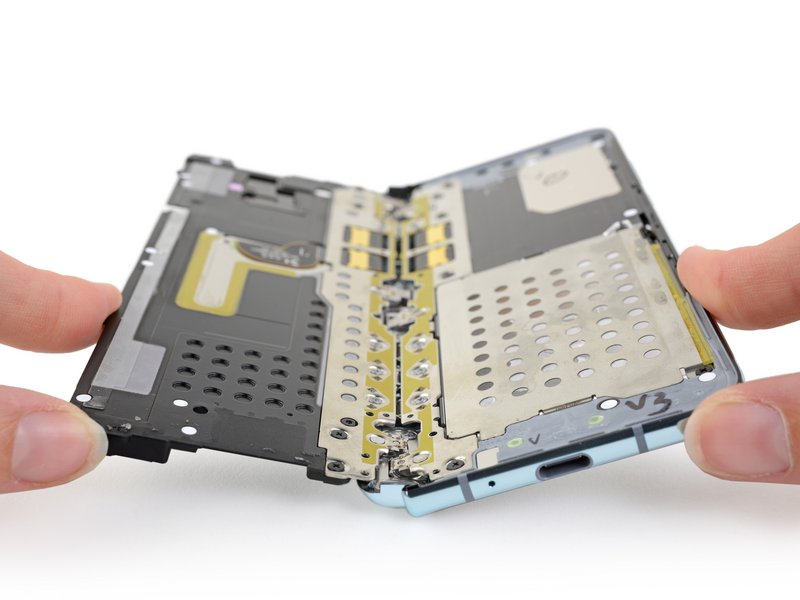 Owing to its faulty display, Samsung's Galaxy Fold has renewed consumer interest in the form factor. However, this interest isn't new. Rumors for the Microsoft Surface Phone have always piqued enthusiasm. But, as Microsoft is busy with Windows, it's Android that's taken up the mantle for developing foldable gadgets. Right now it's Samsung who has introduced a working gadget to reviewers. If you're wondering about the intricacies of the world's first folding smartphone, take a look below for more details.

If you like thin smartphones, then the Samsung Fold isn't the device for you.  When it's folded, the gadget's thickness is 0.5", and as a result, carrying it is a huge inconvenience. It's a bulky gadget, as was highlighted in a leak late last year. Either Samsung's famed QC problems have surfaced once again, or the company dropped the ball when building the Fold's batch of initial units sent out to reviewers.

The Galaxy Fold's internals are laid out in two separate chassis, with both halves sharing camera sensors and displays. While Samsung has built the gadget's frame with aluminum, the Fold's primary display does not blend in smoothly with its frame. The culprit for this is the bezel, which according to iFixit, can be 'peeled' off without hampering any of the foldable display's functions.

Samsung has attempted to give the Galaxy Fold's internals some water-proofing through placing silicon seals around flex connectors on the mainboard. However, don't expect the gadget to work after being submerged. The smartphone's innards are exposed through a small gap in the front bezels, and this gap will allow both water and dust to easily damage the hardware.

The foldable display is loosely attached, as iFixit's team removed it without heating. The teardown suggests Samsung use a better material for the smartphone's bezel, as the current one is insufficiently flexible to match the display. In our opinion, this lack of uniformity is also one of the culprits behind the display's development of a crease even if it's folded once.

It looks as if the crease on the display is due to the panel being connected to two chassis. The phone's spine is cleverly designed, and according to Samsung, it is built to last around 200,000 folds. This mechanism consists of four spring-loaded clasps, two secondary hinges and one primary hinge. As we noticed in an earlier teardown of the device, the two separate chambers of the phone are connected only through flex cables. This is likely to create problems in the future, but for the time being, Samsung's got its hands full. If you're interested in the hinge, check out the video at the bottom of iFixit's teardown.

To conclude, Samsung's design for the Galaxy Fold has its strengths and weaknesses. Its display and hinges are sturdy, but the company needs to work on blending these components together with the device's frame. Thoughts? Let us know what you think in the comments section below and stay tuned. We'll keep you updated on the latest.