Future MacBooks Will Be Able To Stay Powered On For ‘Days Or Even Weeks,’ Here’s Why

According to a newly filed patent by Apple, the company is looking to integrate a fuel cell system into future MacBooks that could potentially keep the device powered on for days or even weeks.

Battery life has always been a cause of concern for a lot of users around the globe. Be it on a smartphone, tablet, notebook or even just a TV remote, it's something which we can't get our mind away from, because deep down inside we secretly know that the battery will eventually give up the ghost, leaving us absolutely stranded in between what we were doing.

A MacBook That Can Stay Powered On For Up To A Week? Where Do We Sign Up!

But all of that could change drastically on the notebook part of the story, as Apple has recently filed for a patent, in which it states that the company wants to power future MacBooks using fuel cells. This would, in theory at least, allow a MacBook to stay powered on for days, or even weeks, if we're lucky enough.

Interestingly, the patent was filed right after it was revealed that a British company was able to toss in a Hydrogen fuel cell inside an iPhone 6, and said company was working in close proximity with Apple.

According to the patent filing:

While the patent sounds way too good to be true, but keep one thing in mind - it's a patent filing from Apple, and the company has a whole stockpile of them which never turn into an actual product. Apple usually files such patents to protect an idea, nothing more, nothing less. So it's highly likely that today's patent might never see the light of day in the real world, until or unless Apple is absolutely serious regarding improving battery life on its devices. 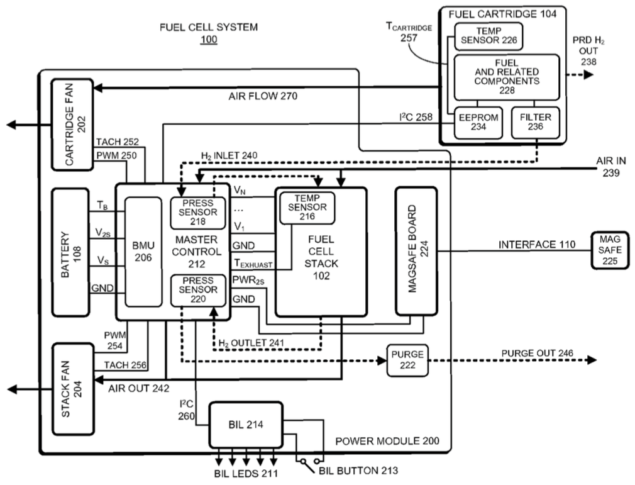 While the patent (apparently) looks as though it's meant for a notebook, or more specifically, a MacBook, there's no reason for us to believe that the tech won't make it to other devices as well, such as an iPhone, iPad or iPod touch. But still, we'd rather wait to see if Apple would turn this idea into a reality or keep it in its patent phase for eternity.