Fragments of Him is a narrative game played in the first person. The story revolves around a tragic accident, and the life of the victim and his loved ones before and after the incident. The player plays through the events and the locations as if they were the spirit or intellect of the characters, making decisions and starting actions that progress the story. Through this snapshot of their lives we see that when a young man suddenly dies, left behind there will always be Fragments of Him. 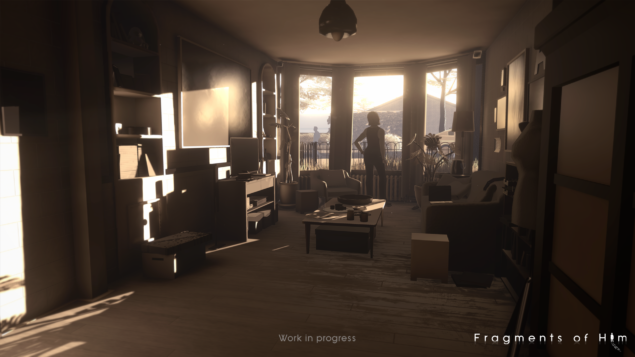 When a young man dies suddenly, his friends and family are left to pick up the pieces. What were his last thoughts, what were the moments in which he changed their lives, and how will their lives be without him?

Fragments of Him is an interactive narrative experience. Follow the story of Will as you see how he influenced the lives of many people.

Elwin and Tino are IGAD (NHTV University, Netherlands) alumni and knew Mata from the awesome design courses he teaches at NHTV. During that period, Elwin and Tino were getting into gamejams and asked if Mata would join in on one. Ludum Dare 26 was the moment where the three of us got together and spent a weekend creating the prototype of Fragments of Him.

It was after the overwhelmingly positive response from players, as well as many professional developers, that we realised that people appreciate and value the kind of experience we were able to craft in the prototype of Fragments of Him.

Fragments of Him has already been gathering praises:

"It doesn't take much to cue the waterworks these days, but Fragments of Him, where a man tries to move on from a relationship shattered by a fatal car accident, hit home hard. [...] I had to walk from my desk."
- Giant Bomb

"Proves that we have barely scratched the surface of the emotions that can be raised through interaction."
- Jeffrey Yohalem, Lead Writer for Ubisoft (Assassin's Creed: Brotherhood, Child of Light)

We will bring you any new information on Fragments of Him as soon as it becomes available.