Key Apple (NASDAQ:AAPL) supplier Foxconn – formally known as Hon Hai Precision Industry Co Ltd. (TPE:2354) – announced today that it would be able to resume normal operations at its facilities in China by the end of March 2020.

Earlier this year, China placed millions of people under a lockdown and shuttered factories, including those of Foxconn, as the coronavirus epidemic worsened. The mandatory quarantines and termination of transportation links between key Chinese manufacturing hubs have wreaked havoc on the global manufacturing and tech industry as supply chains ruptured and demand collapsed.

Nonetheless, the situation appears to be stabilizing in China even as the epidemic continues to worsen in other parts of the world. As an illustration, 600 new cases have emerged in South Korea, pushing the total infections in the East Asian country to 4,800 and the death count to 29. The U.S. has recorded over 100 infections and 6 deaths. There are now more than 10,500 confirmed cases of the novel coronavirus in over 70 countries and territories outside mainland China, including at least 173 deaths. 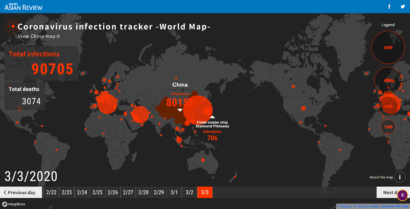 “Prevention of outbreak, resumption of work and production are our top priority.”

In an encouraging sign, Foxconn has reported that over half of its seasonal workforce has resumed work and that the company continues to follow a staggered operation resumption plan formulated in late February.

Foxconn’s top client – Apple – was forced to slash its revenue guidance for the current quarter in February due to a sluggish ramp up of manufacturing activities in China – amid travel restrictions and extended Lunar New Year holidays – combined with a demand slump. Apple had previously expected to earn between $63.0 billion and $67.0 billion in revenue in the quarter that ends on the 31st of March 2020.

Foxconn had earlier stated that it could not estimate the epidemic’s impact on its bottom line. KGI, a Taiwanese brokerage, estimates that Foxconn’s revenue in the current quarter could slump by 46 percent relative to the previous quarter. Bear in mind that analysts expect the company to have earned $11.9 billion in revenue for the entire 2019.

Research firm Canalys estimates that Apple and Huawei, another major Foxconn client, have 99 percent of their production concentrated in China, where the smartphone sales could halve in the current quarter.

TrendForce has also slashed its forecast for Apple’s iPhone production in the current quarter by 10 percent to 41 million units and warned of the possibility of another 5-7 percent downward revision should the production ramp up in China face further delays.