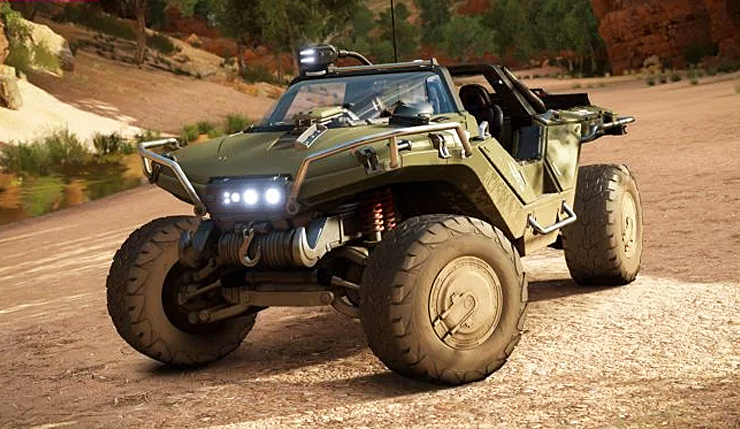 Forza Horizon 4’s Halo-themed Showcase Event is the real deal. Evidence of the crossover first came to light last week, when clever fans discovered a Halo-themed image hiding amongst early-release Forza Horizon 4 files, but, of course, without confirmation from Microsoft and Playground Games, we had to file it under "rumor." Well, the Forza Horizon 4 Halo crossover has been made official, with several outlets laying eyes on the event behind closed doors at Gamescom 2018.

No footage of the Halo content has been released, but IGN described it in some detail – apparently, the event kicks off with a full cutscene, featuring Master Chief himself. As the Chief, you race a Warthog down a fully Halo-ized Northumberland beach as you attempt to keep pace with a Pelican troop carrier. Along the way, you face attacks from Banshees and have to hit the finish line before the Halo ring you’re on collapses. Oh, and Cortana narrates the entire event, commenting on the British landscape and some of the “ancient” houses and other present-day-style buildings you pass. Sounds like Playground Games has put a lot of effort into this one!

We may not have footage of the Halo event, but Microsoft has dropped new 4K Forza Horizon 4 b-roll, which shows off the game’s new Team Adventures…

Forza Horizon 4 developer Playground Games recently revealed a ton of info about the game via a series of seasonally-themed livestreams – I suggest you check out spring, summer, fall, and winter. Here’s the official Forza Horizon 4 description for those who haven’t been keeping up:

Collect Over 450 Cars and Customize Your Horizon Life – With over 450 cars from more than 100 licensed manufacturers, Forza Horizon 4 features the largest and most diverse Horizon car roster yet with all the customization options Forza players love. And for the first time in the Horizon series, players can own property that unlocks new items and gameplay perks.