Forza Horizon 3 Xbox One X Update Being Rolled Out; Native 4K@30 with 4X MSAA and No Drops 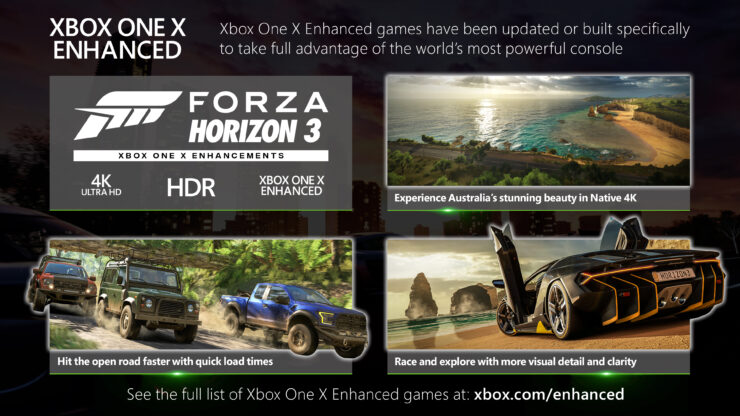 [Update] An official blog post went up now on Xbox Wire where Playground Games Creative Director Ralph Fulton shared more details on the Forza Horizon 3 Xbox One X update. Furthermore, Digital Foundry had early access to the update and shared a new video comparison where they noted that Forza Horizon 3 on Xbox One X runs at 4K@30fps with no drops and 4XMSAA on top of it.

What specifically has your team done to enhance Forza Horizon 3 for Xbox One X?

First and foremost, this update enables Forza Horizon 3 to run in native 4K (3840×2160) on a console for the very first time. Forza Horizon 3 has always been a fantastic-looking game but the clarity and detail of native 4K resolution really brings the vast playground of Australia to life like never before. In addition, we’ve made a number of graphical improvements to the game, such as increased shadow resolution, improved visual effects and increased LOD and draw distances, which take advantage of the power of the Xbox One X.

How do these enhancements impact the gaming experience?

These enhancements are all about the visuals.  We know that our fans really value great image quality, so we’ve taken this opportunity to deliver that to them with this update on Xbox One X. On top of the obvious enhancement to native 4K, there are a number of other improvements we’ve made which really take advantage of the added definition 4K brings. Reflections are sharper and clearer, environment shadows are crisper and better defined, the quality of motion blur has been increased to make the driving experience significantly smoother, and better anisotropic filtering improves the detail visible in environment textures, particularly on the roads themselves. For me, the biggest improvement is in the combination of 4K and HDR though, especially in Forza Horizon 3‘s dynamic time-lapse skies. The sky is such a huge part of nearly every scene in the game that it affects the feel of the game a great deal and the improvements we’ve made to reflections and shadows really complement it.

How has the process been to get the game up and running on Xbox One X?

It’s been incredibly straightforward. It took us less than a day from receiving our first Xbox One X kit to get Forza Horizon 3 up and running in 4K, and when we did we still had a lot of spare headroom on both the CPU and the GPU. The Xbox One Development Kit for the Xbox One X is by far the most developer-friendly and powerful dev kit we’ve ever worked with, which makes it a pleasure to develop for.

[Original story] The highly anticipated Forza Horizon 3 Xbox One X update is currently being rolled out as we speak. It should be available at 1 PM EST.

The game already showed up as being ‘Xbox One X Enhanced’ for numerous gamers, but the update is now finally being deployed to Xbox One X systems. The exact Xbox One X enhancements are unknown, but Microsoft and Playground Games have promised native 4K resolution on the One X.

Forza Horizon 3 was released back in September of last year and already looked stunning on the original Xbox One console, especially with HDR enabled. We've included one of the game's trailers below. Chris loved it when playing on PC.

Regardless, Forza Horizon 3 is honestly my favorite driving game right now. It has so much to offer, so much for you to do and see. Not only that, the cars are simply fantastic to behold, and even better go tinker with and modify to suit your needs. Only time will tell, but I can honestly see myself sinking a lot of time into this game, and I couldn’t be happier with it.