It's hard to really explain the surprise that a game like Forza Horizon 3 brings to the table. After the recent disappointment from the hands-on with Gran Turismo Sport, it's refreshing to play a simply outstanding racing game. This is what Forza Horizon 3 is, a simply outstanding game for a few major reasons. There's a huge amount of variety on offer. From races, bucket lists, speed traps and more. It also features one of the most realized open worlds you'll ever find in a driving game and really brings back the excitement that came from older titles.

When you count the lost franchises you realize how lucky we are to have the few that are left. Huge names like Burnout, Midnight Club, Destruction Derby and what Forza Horizon 3 may as well be the spiritual successor to, Project Gotham Racing. Arcade Racers seem to have been on a decline, even Gran Turismo Sport marks an abandonment of the arcade style. Thankfully, we have a new game to take the mantle of best arcade racer. Welcome to Australia, home of the new Horizon Festival.

I'll be the first person to admit that I've been overly prejudicial against Forza in the past. I'm no fan of the main Forza series, having ignored the previous two, sticking with either Gran Turismo or GRID. Forza Horizon 3 is the first title I've played from the spinoff horizon series of games. Frankly, if they're all this good I'm sad I've missed out.

But where to start? I already thought the game looked fantastic from when I got to see it back during Gamescom.  My impressions from that have turned out to be completely accurate. Forza Horizon 3 is one of the most visually stunning games you're ever likely to play. The PC version isn't the most stable of things, suffering from a number of gameplay and performance issues, but I've been fortunate to have avoided the vast majority of them. My major problem is the inability to capture any footage, the game crashing immediately with any attempt at recording gameplay. Other than that, I've suffered from some stuttering that was solved by lowering some of the graphical settings.

That has been the major problem I've had with the game, with one other slight complaint. The other problem is actually the core concept and tagline of the game: This is your horizon festival. Although I've never played the previous games, from what I've seen and heard, this is the first time the game has put you in charge. Honestly, I would have rather had a structured approach designed and developed for me. This isn't to say that this isn't featured, even to a large degree, i'm just not sold on the create your own races, even now.

The problem with them is just how manufactured they feel. As much as it sounds like a great thing, there's only so much you can do to make the exact same track as you've already raced, feel different. The game gives you options in setting car classes, time of day, weather and number of laps. It even lets you string together a number of these custom races into a championship. But nothing you create, for lack of a better word, ever feels as good as the original exhibitions or time attack modes created by the developers.

Fortunately, there's more than enough content to be found in Playground Games' representation of Australia. What a beautiful Australia it is as well. Towering skyscrapers sit back off of golden sands in the coastal cities with airports, small towns, mines and other industrial areas span the rest of the land. Rocky outposts, rivers and forests also add a natural beauty to the plains and deserts. Rivers, Oases and the sea also add a much needed contrast to the harsh and dry inland.

Forza Horizon 3 isn't really the pure arcade racer in the same vein as Midnight Club or Burnout, though it's certainly not afraid to take itself to the extreme. Everything in the world has been repurposed for your festival. The speed cameras will track your speed, in a goal to see exactly how fast you can go. Why not go totally out there and race against helicopters or speed boats,  break into barns to find extremely rare cars and crash through as many bonus boards as you can find. You even hire the radio stations you want to, who'll then play for and promote your festival. They'll also play skill songs, which offer a multiplier to the skill points you gain when performing skills during them.

It'd not be far wrong for me to say literally anything and everything you can think of car related results in these skill points. From your basic features, such as going very fast to just narrowly avoiding another vehicle, to more extravagant aspects like hopping around like a kangaroo in the outback, drifting around and wrecking as much of the scenery as humanly possible. Keep leveling up your skill level to gain points to spend on upgrades. These upgrades include passive bonuses, cosmetic options and even bonuses like increasing the value of your vote in the online portion of the game.

Of course, any driving game lives and dies by the cars and their handling. Forza Horizon 3 has launched with 350 cars, from multiple manufacturers and offering a huge variety in so many aspects. This is where the game straddles the line between arcade and sim almost perfectly. Ranging from the supercars, to old-school muscle cars to the off-road buggies, everything feels so different to drive. It shouldn't come as too much of a surprise, however, that more cars are planned as DLC.

Obtaining these cars and modifying them offers a huge amount of variety as well. You can simply buy them from the garage, using credits gained through racing and other aspects of the core game. Using these same credits to buy cars on the in-game auction house is also an option. I've had issues with this though, the game failing to recognize that I've actually placed a bid. Enter the garage and you'll also have the chance to upgrade your car in so many ways, both cosmetically and functionally. Push forward and upgrade your engine, brakes and more and you'll soon have turned a regular Ford Mustang into an uncontrollable monster. Granted, you'll likely not be able to handle it.

Handling is the more noticeable area where you'll notice the difference between the cars, something that should always be obvious. However, you'll also notice huge differences through simply driving. The force of a supercar accelerating forward compared to a buggy. The feel of your Lamborghini Aventador slowing as it enters even shallow water or its slide on a sandy beach. You'll rarely, if ever, feel overwhelmed by the driving and handling of the cars, but if you do something that really shouldn't be done you will be punished.

Despite the boring nature of Forza Horizon's main feature, the ability to create your own races, it's an outstanding game. It would have been considerably better to have the ability to create your own route, rather than use set blueprints. But for that to be my major concern with the gameplay, there's little the game needs worry about. Considering the fact that Playground have long term plans and are releasing DLC, there is always the slight option that this feature could also come to us.

For now, Playground need to work on fixing the game on the PC. While it runs well for me, others have had many problems and it's simply something that needs rectifying. Thankfully, today also sees the release of a patch which will have hopefully remedied a number of the issues. Seeing the response of the gamers will see whether this is the case or not.

Regardless, Forza Horizon 3 is honestly my favorite driving game right now. It has so much to offer, so much for you to do and see. Not only that, the cars are simply fantastic to behold, and even better go tinker with and modify to suit your needs. Only time will tell, but I can honestly see myself sinking a lot of time into this game, and I couldn't be happier with it. 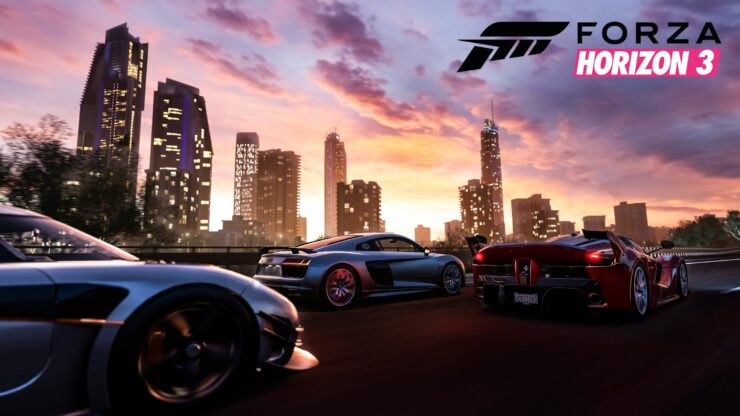 Forza Horizon offers you a huge world to explore. It gives you as many cars, from supercars to off-road buggies, to race how and when you want. Explore the outback, race along the coast. Forza Horizon 3 is possibly the best racing game in the world, just marred by performance issues on the PC and the dull nature of the create-your-own-race options