It largely been forgotten amid the battle royale mania, but the Save the World variant of Fortnite is still, technically, in early access. Epic originally promised a full, free-to-play version of the original Fortnite would drop sometime in mid-2018, but obviously, that hasn’t happened yet. Now Epic has officially pushed Save the World’s full release to 2019.

According to Epic they’re working on a “broad set of features, reworks, and backend system improvements” before making Save the World free to play. In a new blog post, they went into a bit more depth about their plans for the game’s front end and Hero system: 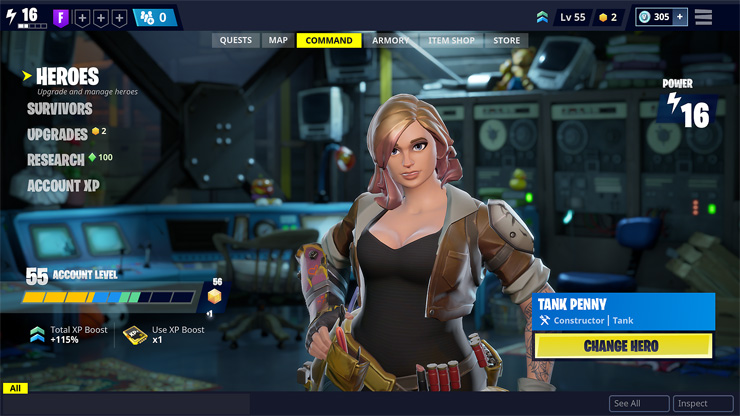 We're excited to announce a brand new updated Hero System! This system has been redesigned to offer a more flexible approach to customizing your loadout with more options and room for creativity. You’ll have a total of six Hero slots to manage up from the previous three. First choosing a main Hero to command and up to five additional which will determine your perks and traits. We’re looking to expand the variety of loadouts you can create - putting the tools in your hands to make meaningful new decisions. We’ll put together a comprehensive blog to run you through the system, when we finalize all the details.

The front-end UI should feel more like an integrated and understandable part of the game. Bringing the inventory into the front-end earlier this year was the first step, but the upcoming revamp will push things even further. We're reorganizing menu options to make them easier to find and converting some old UI tutorial quests to use a new callout system. Additionally, we’re adding polish and character(s) to the menus. At the end of this revamp we want to move more of your Fortnite experience into the game rather than in the front-end. We’ll release an in-depth look at all these incoming changes in the next few weeks, to prepare for the rollout in the next few months.

In more immediate news, Save the World’s spooky Fortnitemares event is making a return this week, and the game is currently 50 percent off, making it $20 for the standard version and $30 for Deluxe.

Fortnite: Save the World is available on PC, Xbox One, and PS4.