The Flash WonderCon Trailer is all Kinds of Awesome

Warner Bros. has just released The Flash sizzle real that was shown at WonderCon during CW's panel.

To amp up the excitement, an action-packed trailer from The Flash team offered fans an extended preview of the final episodes of the breakout hit series’ lightning charged first season. The exclusive sneak peek not only featured guest star Emily Kinney (The Walking Dead) as Central City’s latest meta-human menace Brie Larvan aka Bug-Eyed Bandit, and the return of a few fan-favorite Rogues in The Mist, Weather Wizard & Rainbow Raider, but also featured a few familiar faces from Starling City’s Team Arrow, including Brandon Routh (as The Atom) and a glimpse of Arrow’s Stephen Amell standing shoulder to shoulder with cousin Robbie Amell (as Firestorm) and the Scarlet Speedster himself!

The trailer certainly builds up excitement, as it reveals some quite interesting plot developments for our favorite speedster.

The Flash has become a surefire hit for The CW, in less than a season, and has fans eagerly waiting to find out how the upcoming confrontation between Flash and Reverse Flash will turn out. There seems to be more scenes coming with the two teams pairing up, with Oliver Queen and some of his allies paying another visit to Central City.

On the romance front, while last we saw him exchange a kiss with longtime crush Iris (Candice Patton), the new reel teases a kiss between Barry and STAR Labs scientist Caitlin Snow (Danielle Panabaker). Although this is hardly the only thing that seems kind of strange in this trailer. Caitlin Snow 's villainous alter ego is Killer Frost, and as Danielle Panabaker said “You’re going to see her sooner than you think.” So this goes further to make the kiss between the two seem even more questionable.

The appearance of Grodd at the end of the trailer also raises excitement as well as the fact that Episode 21, is titled "Grodd Lives". 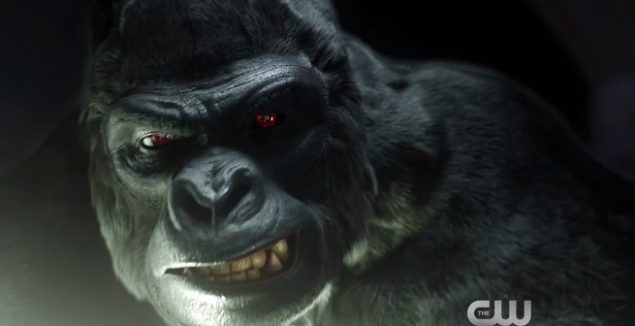