CNNMoney.com reported today that Apple has finally approved the Skyfire 2.0 mobile web browser for the iPhone, the first browser to implement partial support for Adobe's Flash player. Skyfire, which will be available for download at 9 a.m. ET on Thursday for $2.99, is the first such application to receive Apple's approval for distribution in its App Store. 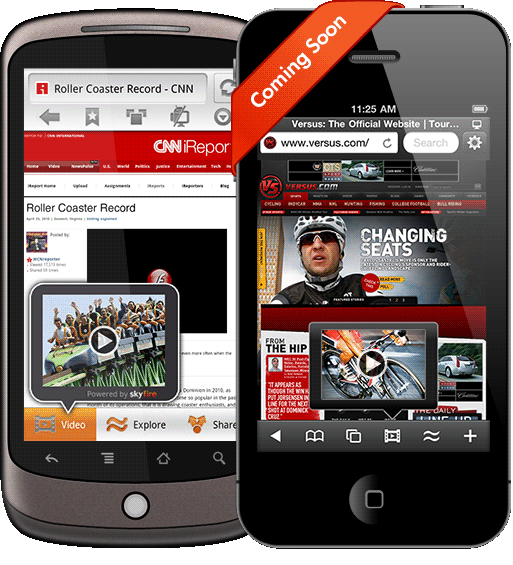 Despite recently easing its restrictions on the kind of applications that can be approved for its App Store, Apple still does not fully support content encoded in Adobe's Flash for its iOS devices, but that's because Apple CEO Steve Jobs has declared that Flash performs poorly on mobile devices and sucks up battery life, while Adobe (ADBE) says nearly 75% of online video is encoded in Flash.

So, how exactly does SkyFire get around this issue?

When users click on a page that contains Flash video, Skyfire's servers download, render and translate the video into HTML5, which is a Web standard that iOS devices support. Skyfire then displays a thumbnail that users can click on to stream the video from its servers. The app won't translate games or other non-video content that runs in Flash, however.

It's estimated that three-quarters of Web video is encoded in Flash, that doesn't mean that video is encoded only in Flash, but according to a recent study by MeFeedia, more than half of the videos found online are also available in HTML5, such as YouTube, which hosts multiple formats.

Skyfire also has a similar app available for Google's (GOOG, Fortune 500) Android. Viewing Flash is already possible on some Android devices, but only those running Android 2.2, which is on just one-third of Android phones, according to Google. Like the Android version, Skyfire for iOS isn't a standalone application, but rather a tool that works on top of Apple's Safari Web browser.

Early versions of the software(circa 2008) surpassed 3 million downloads, but were criticized for their bugginess, sluggishness and privacy concerns. The newer versions are expected to rectify those issues.

For secured sites like online banking, Skyfire turns off its enhanced Web services so that those sites are rendered on users' phones and not on Skyfire's servers.