FedEx Stock Just Shot Up Thanks To Amazon’s Announcement

Today was a fairly average, if slightly poor day for the stock market. The Dow Jones was on its way to a new record-high until news broke that the China tariffs would in fact remain until after the November 2020 U.S. presidential election. Most stocks sagged in the afternoon hours as a mild sell-off commenced, however FedEx (NYSE:FDX) actually surged and we can tell you exactly why that happened.

Amazon (NASDAQ:AMZN) began announcing to sellers that they can once again use FedEx ground delivery for shipments to customers. The ban was formally lifted at 4 p.m. central time and as of this writing merchants can once again ship out goods via FedEx. 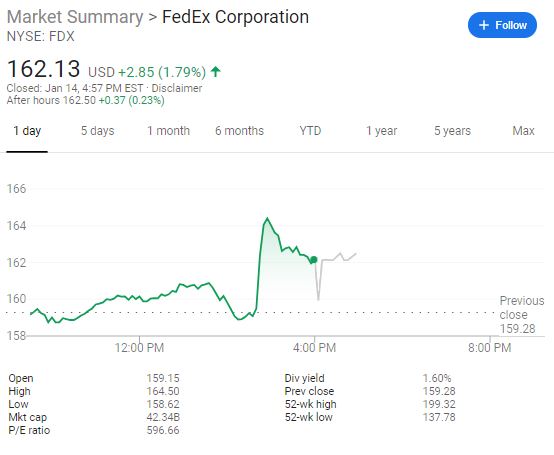 See that sharp spike in the above graph? That is the miniature buying frenzy that FedEx shares saw after Amazon simply emailed its partners giving them the green light to once again use FedEx for shipments.

About a month ago Amazon issued a ban to its 3rd party sellers which told them to cease all use of FedEx ground. Needless to say, investors in FedEx were troubled by this news as Amazon is quite the hefty client, disregarding the fact that UPS and Amazon itself also ship brown boxes to customers.

At the time Amazon said that it was worried that the use of FedEx would impact on-time Christmas deliveries, an issue that if realized would cause endless headaches for the e-commerce giant since it has a fairly generous refund and credit system when it comes to broken delivery promises.

It seems that the buying reaction is the market realizing that Amazon.com sales are about 58% third-party merchants, so this a substantial bit of news for the company. It's worth noting that FedEx already dropped Amazon 1st party ground shipments in the summer of 2019.

Who is buying and selling Amazon stock?

Thanks to the SEC 13F data, we can track large funds and if they sell or buy major tech companies that we report on here at Wccftech. TOCQUEVILLE ASSET MANAGEMENT owned 88,963 shares last quarter of Amazon. Today the firm reported its current holdings of Amazon and the number is down to 46,595 shares. Tocqueville reduced the value of its position in Amazon over the last three months by roughly $68 million - or by about half.