Look in my eyes, what do you see? The cult of personality. I know your anger, I know your dreams. I've been everything you want to be. I'm the cult of personality. Far Cry 5 is sorely missing that song from any and every piece of material. After taking players to Indonesia in Far Cry 3, the Himalayas in Far Cry 4 and of course prehistoric times in Primal, it's time for somewhere a little more close to home. At least if you're from the US. Welcome to Hope County, Montana.

I want to get any gushing I have out of the way right now. I love Boomer. For roughly half a second I considered the other two support options available to you in the game. There's the sniper, Grace Armstrong. You could even choose strangely cheery bloke, Nick Rye, who flies around in his own plane. If you choose either of these, you're wrong. The correct choice is Boomer, the scruffy but incredibly lovely dog. I actually had a grin on my face watching his every action.

The one thing that Far Cry 5 has already got right is the detail placed into the characters and the world. Boomer is adorably scruffy. Even more so when you pet the dog and it jumps up with a grin on its face and licks you. The cultists that you fight in Hope County actually look absolutely bonkers, charging with reckless abandon, rage visible on their faces.

What limited time I got with the game (roughly twelve minutes) allowed me to view at least a small amount of what to expect from Hope County. Returning are animal hunts from, well, every open-world game. In addition is resource gathering from other flora and fauna. Also returning are random encounters, such as the ability to rescue hostages from the cultists. New features have also been brought into the game, one example being fishing.

Fortunately, there also seems to be a great deal to explore. Taking the time to look at more than just the fighting, which most others seemed to focus on, I looked at everything possible. That includes the settings screen and the world map. Sadly I was on a PS4 version of the game, so as for the visual fidelity of any PC version I can't say.

The version I was on did look great. However, I had slight issues with the motion blur. It actually strained my eyes when I was turning in a particularly grassy area. Worse than that, it actually felt sluggish and slow compared to any other movement, even looking up or down. Almost like the game was slowing down to give it time to load what was around.

What did interest me, though, was the 3D world map. Letting you pan, tilt and zoom highlighted the expanse of the game and the variety. From low plains to the towering Rockies, dense forests and rushing rivers, there'll be a lot to explore. The game also features a variety of wildlife to be found in the area. Although I only encountered deer, cows, wolves and chickens in my playthrough, the setting will undoubtedly feature a huge number of animals for you to brutalise

Leaving the side activities alone, let's look at the meat of the game. The playable version of the game starts with the liberation of a small area packed full of Eden's Gate cult members. This is pretty much what you've been used to in Far Cry 3 and 4 in the fact that you just kill any enemy in the area. Once liberated, the inhabitants come out of the woodwork and start rebuilding.

The problem here was that it felt somewhat off. Shooting a horde of enemies to liberate an area is nothing new to the series. What seemed off is the accuracy of the shooting, the hitboxes. I could swear I was hitting enemies without the game actually responding to this. Something just felt unrefined, raw. Of course, the game isn't going to be released until early next year, so there's a lot of time for that to actually be fixed.

There were a few more bugs on show. Pathfinding of the AI, with characters getting stuck on a fence. Boomer, however, managed to find his way wherever he needed to. Smart dog is obviously smart. Although I will say there were issues with the physics. Boomer was also a super dog. A grenade happened to go off close to him and while you would expect that to blast him away, he literally flew up into the air about ten metres. The game at least recognised the damage this would cause, requiring me to rescue him before he died. 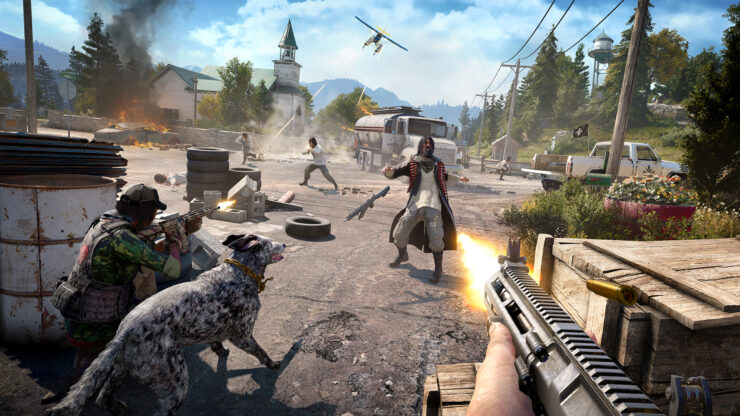 It's early days still. That's the core thing to remember. I enjoyed the setting of Far Cry 5 and the story intrigues me. It's a little too familiar in what you're actually doing, simply liberating more and more areas. I'm thinking that Far Cry needs to do what Assassin's Creed has done and take an extra year off. I've also no doubt that the gameplay, physics and AI issues I encountered, as minor as they are, will be ironed out before release.

Far Cry 5 will be a strong game. That much is certain. Ubisoft have got the series nailed down and there's little on show that indicates it'll move much from the previous iterations. What will really raise, or lower, the game will be the characters and story. If they have another Pagan Min on their hands, the future's looking bright.

Far Cry 5 is currently scheduled to release on February 27th, 2018 for PC, PlayStation 4 and Xbox One.