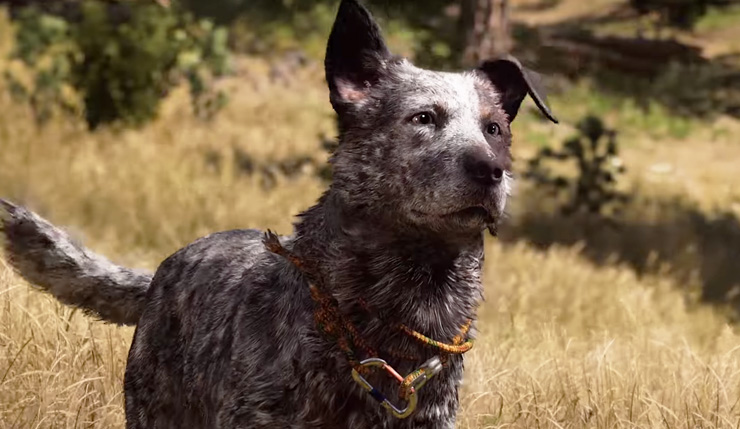 Far Cry 5 promises to be the series’ friendliest entry yet. Oh, sure, the game will still serve up plenty of mayhem, death, and destruction, but it also puts a premium on teamwork. The entire game can be played co-op, and those who can’t wrangle any real-life friends can recruit a variety of colorful AI characters to help take down the cultists. Ubisoft has released a new series of trailers and bios for Far Cry 5’s colorful guns for hire, which you can check out, below.

Bio: Nick Rye broke away from a long line of Holland Valley Air Force veterans. His grandfather flew in WWII and in ‘Nam, and told Nick that war is hell—no exceptions. Nick met his wife Kim online and was attracted by her stories of travelling the world. After 9/11, he was pressured by his father to enlist, but Nick refused, choosing to stay and take care of his wife, who had recently suffered a miscarriage. Nick never reconciled with his father.

Recently, John Seed—Eden’s Gate’s lawyer—has aggressively tried to buy Nick’s crop-dusting business. But Nick has refused to no end. And to complicate matters worse, after years of trying, Nick and Kim are expecting their first child any day now. All his life, Nick has resisted the idea of going to war. But now war has come to him. It’s time for him to step up and become the true American hero he was destined to be.

Bio: Hurk Jr. was born two prongs short of a fork, raised on TV dinners and soap operas in the absence of his father (Hurk Sr.) and his mother (Adelaide), who ran the family’s small business When Hurk Jr.’s mother ran away with another man, his father decided to enter politics and moved to their homestead in the Whitetail Mountains, where he could feed his devotion to right-wing paranoia in full.

Now Hurk Jr. lives with his dad in a fortified compound, “enjoying” the old man’s company and the many guns and armored vehicles on the property. Hurk believes in only three things: poundin' brews, rockin' it all the time, and givin’ praise to the Monkey King who will eventually bestow him with great fortune.

Bio: Jess’s parents were frequently out of work, so she moved around a lot and never had a proper childhood. Sick of her home life, Jess ran away to live with her badass Granny, a hard-core prepper and survivalist. No-nonsense Granny straightened her out fast by teaching her how to hunt and live off the land. For the first time ever, Jess finally had a role model and a sense of stability.

One night, while she and her family were sleeping, an Eden’s Gate henchman named The Cook broke into their house and abducted them. The Cook starved and tortured them relentlessly before finally killing Jess’s parents in front of her. But Jess escaped, and thanks to her Granny’s lessons, she now has the know-how to take down cultists and rescue others. She’s determined to save everyone she can and get revenge on The Cook. In a roundabout way, Jess found her true calling: killing.

Bio: Grace Armstrong is an expert sniper who has won a bronze medal at the US Olympics, served multiple tours in Afghanistan, and returned home to work as a weapons instructor alongside her father at the family’s shooting range in the Holland Valley. The Project at Eden’s Gate was a growing presence, but nothing she took seriously at first.

However, things came to a head when the shooting range was violently taken over by The Project, while local police refused to help. The resulting chaos led to the death of Pops. At that moment, something snapped inside Grace. She buried her father, unpacked her sniper rifle, and went hunting for the members of Eden’s Gate.

Bio: Adelaide Drubman is healthier, wealthier, and wiser than most folks. Just ask her: she’ll be glad to tell you all about herself. Addie married a wealthy older man, Hurk Drubman Sr., when she was in her 20s. Their shared love of Reagan, Jesus Christ, and the NRA was a match made in heaven. It was after their son Hurk Jr. was born that Hurk Sr.’s attention started to drift to…other interests.

After a decade of indifference and infidelity from her husband, Addie filed for divorce. She “let” Hurk Sr. keep the kid and enjoyed her life to the fullest: booze, bazookas, and boy toys. Now in her 50s, Addie is still trying to live the same life. But paradise was lost once Eden’s Gate started sniffing around, begging to buy up her land. When she refused to sell out, they came with guns and took it by force. A furious Addie has been plotting revenge and brushing up on target practice with her prized AK-47.

Bio: His birth certificate says Charlemagne Victor Boshaw IV, but he’d prefer it if you called him Sharky. His parole officer calls him a serial arsonist, but he’d prefer the term, “fire enthusiast.” See, wherever Sharky goes, fire follows: It destroyed his family’s trailer park on three separate occasions, forcing it to close down.

The law couldn’t change Sharky, but that didn’t deter Eden’s Gate. They invited him to join them and walk the path to a better life. When he found out that a better life involved torture and brainwashing, Sharky decided to fight the cult. And his fire followed. Oh yeah, and it just so happens that Sharky is Hurk's younger cousin. That might explain a few things.

Bio: Boomer is a former bird-dog regional champion. After a successful career, he was content to spend his retirement at his owner Rae-Rae's pumpkin farm. Then the cult stepped in and took his family away from him. But Boomer remains a loyal companion to those he can trust, and he's always ready to use his keen senses to take down the cult.

For those not up to speed on Far Cry 5, the ironically-named Hope County, Montana, has been overrun by a doomsday cult called Project at Eden’s Gate, led by the charismatic Joseph Seed. You play as a young deputy sheriff tasked with ridding the county of Joseph and his followers, and you’ll be backed up by a variety of able allies. The odds are certainly against you, but together you and your posse will return Hope County to what it once was or die trying.