We also tested system memory and VRAM usage to get an idea as to how Fallout 4 uses the available resources and whether it over commits or not. CPU usage overall was around 99% on all four cores of the i5-6600K for all cards, running between 98%-100% depending on the complexity of the scene in front of you. Memory usage is important, as we've seen in our recent Black Ops III performance analysis, as it can play a distinct role in how smooth the experience is. If too much memory is being used, then swapping between system RAM and even the HDD can occur, causing some very obvious slowdowns. 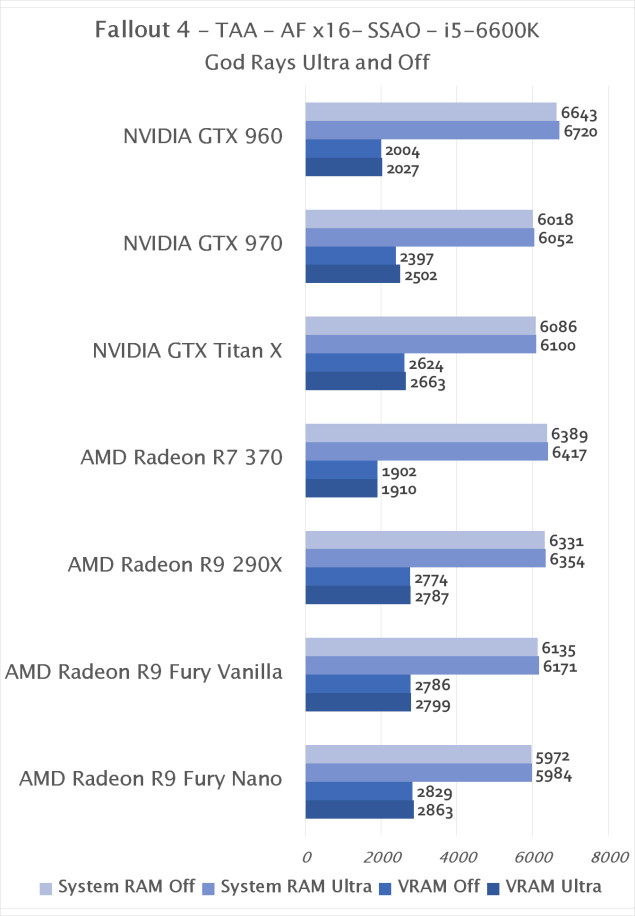 The results are remarkable, though certainly in line with Skyrim, the other Creation Engine game that exists. It doesn't over commit on VRAM, nor does it seem to have a memory leak of any kind. RAM usage is stable and there's very little difference between having God Rays on and off.

Fallout 4 has been a very highly anticipated game, one that was full of controversy from the very beginning. When it was announced that GameWorks was going to be included, the assumption was that it was going to perform poorly, or not really at all. There were a few game crashing bugs, but despite those limited circumstances, it ran mostly flawlessly.

The performance itself is also nothing short of stellar on both NVIDIA and AMD. Quite obviously it's faster on NVIDIA cards at the moment, with the Fury not nearly able to compete with the Titan X. But I think that the reason that there's such disparity is due to the relatively unoptimized drivers from AMD. These are a beta driver that, granted, have had attention paid to having Fallout 4 run smoothly, but there is still more work to be done. NVIDIA, on the other-hand, has done well to provide a game ready driver that works well and without many issues.

So perhaps the negative association with GameWorks was premature. And despite the less than ideal performance on the PS4 and the Xbox One, it runs well on the PC. And while it isn't quite the most spectacular looking game to ever grace our PC's, it isn't horridly ugly visually. It's a small evolution of a known engine that's stable. I think that that's a good result. And it's actually quite fun to play as well.

NVIDIA CFO Comments On RTX 30 Supply Constraints, Prices Will Probably Not Stabilize For Gamers Through Q1 2021