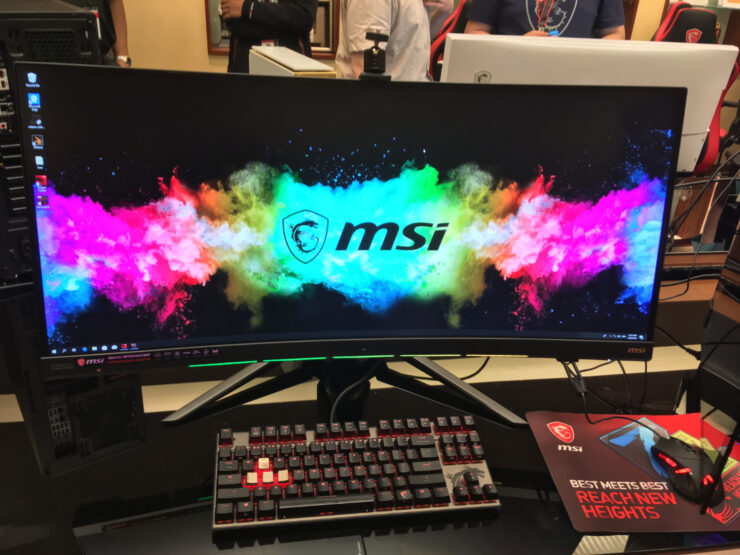 Facial recognition is a feature that has been very saturated amongst phones, but something that is hasn't been on yet is a monitor. This feature comes with the MSI MPG341CQR which uses the facial recognition to allow you to quickly choose your display preference profile. MSI originally teased this at CES this year and has confirmed it is coming out in Q3 for $799.

This 34 inch ultrawide boasts a QHD resolution (3440 x 1440) with a 21:9 aspect ratio and 1800R curvature. Speed isn’t a concern with this monitor as it has an anti-glare VA panel boasting a 144Hz refresh rate and 1 ms response time. It would have been great to see the panel at 240Hz. I already talked about the one use of the webcam for facial recognition, but it can also be used to control the brightness depending on the brightness of the room. With a 3,000:1 contrast ratio, 84% DCI-P3 and 105% sRGB color gamut coverage, plus 400 nits max brightness (DisplayHDR 400), we already expected the MPG341CQR to deliver brilliant colors (MSI pegs the color count at an impressive 1.07 billion). The ports include two HDMI 2.0, two USB 3.2 Gen1 Type-A and one each of DisplayPort 1.4, USB-C, USB 3.2 Gen1 Type-B, headphone, mic in and a PC to monitor audio jack combo which is quite a good amount, almost as much as the ports on your average case.

The other feature that MSI has decided to include is what they have named, night vision. Night vision is one of the most needed technologies that many gamers will benefit from. When you turn on night vision in the OSD menu, the monitor identifies darker areas and makes them brighter without overexposing other parts of the image. MSI showed a demo with the feature in action during that infamously dark episode of Game of Thrones this season. Without the feature on, Jon Snow looked like he was fighting a line of shadowy figures through a dark alley, but with Night Vision on, the fighters’ metal armor could clearly be seen. The demo was not seen with the monitor itself, but if it is any similar, it is going to be great. Finally, we got to the RGB strip on the bottom and the RGB starship design on the back. It can be combined with Steelseries GameSense to mimic what is going on in the game.

As I said earlier, MSI confirmed that this will be available in Q3 of 2019 for $799. I would expect something like this to be much more expensive, but this very well priced. To top it all off, they have included a bracket for your webcam and a mouse bungee that attaches to the bottom of your monitor.