Facebook Plans To Dedicate A Separate Feed For Videos On iOS

Who says Facebook is old school? The company is experimenting with quite a handful of new additions in its app for quite some time now. Current Facebook users might have experienced a stream of videos on their News Feed for several months and this is something the social networking giant wants to see more. 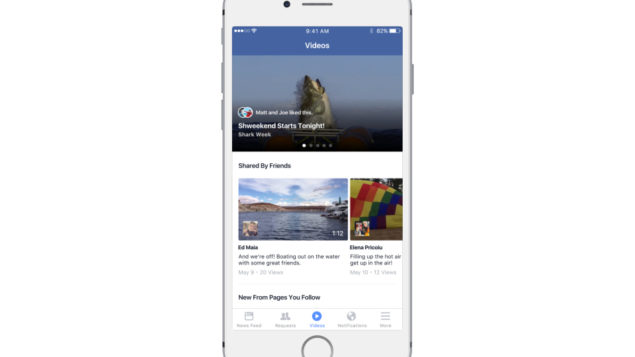 Today, Facebook posted on a public blog post that the company has further plans for its video niche on the app that would be oriented towards iPhone users for now. The so-called 'plan' has numerous aspects of development that can be implemented in the near future. However, some of them includes a separate pane or feed for videos on the app that can be accumulated by various means from within the app.

Let's dive in to see some more details on Facebook's plans to broaden the video experience for iPhone users.

An entire feed dedicated to videos states that Facebook will be integrated with a 'Video' tab or option within the app. It will solely show videos to the user whether they are saved videos or videos related to pages or specific profiles and more. Furthermore, the company can also accumulate videos from Moments, that broadcasts live videos feeds from infamous Facebook users. However, we do not yet know if the introduction of a new video option will exclude videos from the original News Feed.

Surprisingly, this is not the only addition that the company has planned out for future developments. Another new addition to the video category is an option that shows suggested videos. This option will enable the app to show relevant or additional videos when a user watches the initial one. The 'Suggested Videos' option has caused an increased in the number of video views. Henceforth, the company deems it as a possibility to be implemented. Viewing relevant or additional videos cause users to see expanded information via various sources. Moreover, the ads are also part of the tests being conducted in the Suggested Videos category.

Another option focuses on multitasking capabilities within the app, making users scroll through their News Feed while the video plays on a miniature floating screen. The company has seen positive results so far and the official release seems closer.

This is it for now, folks. What do you guys think about these changes related to videos on the Facebook app? Do you guys desire a separate video feed? Let us know in the comments.