Facebook For iPhone App Gets A New Super Fast Update

Without a doubt Facebook is the largest social network on the planet. Facebook for iPhone app is perhaps one of the most used apps and today it has received a new super fast update. This new update shows that Facebook has been hard at work and they have released one hell of an application. This new update brings the version number up to 5.3 and is available for all compatible iPhone, iPad and iPod touch devices. 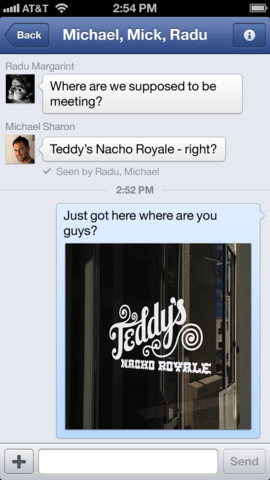 To be honest the Facebook apps before v5.0 were simply horrendous. It was shocking to note that the world's biggest social network could not make a mobile app that could be appreciated by its millions of users around the world. When v5.0 came along it did fix a lot of the grievances that users had with the earlier versions. This particular Facebook for iPhone app update has taken the level up a notch as it now better than ever before.

The first impressions of this app make it evident that speed has been Facebook's top priority in the case of this update. Nobody likes an app which is slow and lags a lot. Facebook v5.3 is fast, it is as simple as that. This new speed translate in to ease of use for the user when it comes to checking the news feed, which a lot of us do multiple times a day. The company has completely rebuilt Timeline on Facebook for iPhone app and it now opens a lot faster.

This new update also makes uploading photos a lot easier, not to mention faster. Users now have the ability to choose albums while uploading photos from their iPhone, iPad or iPod touch. To put it in a nutshell, the entire crux of this update was speed and the developers at Facebook have executed that brilliantly.

Facebook for iPhone app is available as a free download from the iTunes App Store. It is a universal binary, meaning it has native support for iPad and iPod touch as well. iOS 4.3 or higher firmware is required for installation of this app.