Too Excited for the Facebook Dislike Button? Don’t Fall Prey to Early Offers

Remember the new dislike button that Facebook is working on? Apparently, it has already been part of a pretty nasty scam. Talk about opportunities and the prompt ingenuity of spammers. 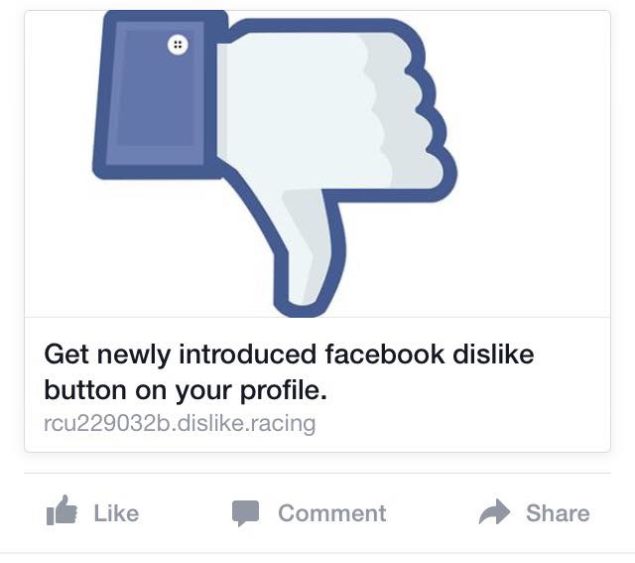 Mark Zuckerberg recently hinted in a Q&A that Facebook is working on a feature that will help users dislike posts, sort of. This feature is now being reported to be part of a scam where criminals are not only trying to install malware onto their preys' machines but also luring them into giving personal data. According to a report, some users have started seeing Facebook posts that are promising users of an early dislike button based on an invite-only system. Once the user clicks on it, it leads them to a malicious website where a countdown timer is shown. The scam then asks users to share links onto the their timeline and in the messages sent to their friends' list, which of course is done to be propagated more easily and swiftly to a wider audience.

Once it's done spamming your timeline and your friends' Inboxes, it will then ask you to fill out surveys in an attempt to get personal data, including account credentials. This information may then be used to spam your contacts via email or hijack your accounts, of which there is no evidence so far. This 'Facebook dislike' button scam can also potentially spread malware on your own computers and through you spread it to your connections on Facebook or via email.

While there have been no reports of anyone being affected by this scam so far, it could hurt many considering the excitement that the news of a Facebook dislike button had brought to users. Serving over a billion people, Facebook is one of the most lucrative online spaces used for scamming and spamming purposes. The latest report only proves how easy it is for cyber criminals to turn anything into a scam and tapping into such a vast user base of Facebook, it would be rather easy to find victims and distribute the malware to several more.

The only way to stay clear of this and various other similar scams is to never click on links that look dubious to you. For example, you'll never see strings like rcu229032b.dislike.racing in a legitimate, official post. Even if some feature is rolled out on an invite-only basis, Facebook wouldn't need you to publicize it by asking you to share on your timeline or with your friends; it can send the pop ups to anyone and everyone if it may want to. In future, if something looks suspicious or simply too good to be true, better not to click on it than to apologize to your friends for having spammed their inboxes later on, or worse, corrupting your devices with malware and giving out personal data. Stay safe, folks.