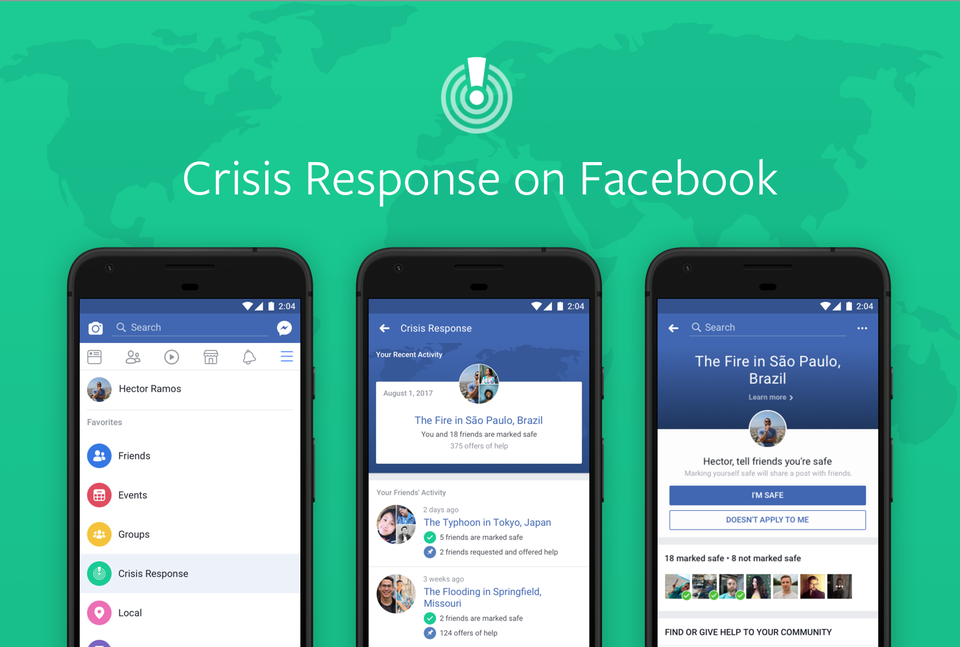 Facebook has added a new feature to its site dubbed "Crisis Response." This feature will act as a central point for all of Facebook's safety-related tools. It mainly includes Safety Check, a feature that allows Facebook users to notify their friends and family about their safety during natural disasters, terrorist attacks, and other fatal accidents.

Crisis Response hub will also include a mix of Facebook posts (public), articles, photos, videos, and news to keep users informed about their surroundings in the time of crisis. Other tools include Community Help that was first added in November 2016 aimed at coordinating help during a disaster along with fundraising for supporting affected citizens, groups, and non-profit organisations involved in the relief work.

This feature adds to Facebook's continuous efforts in projecting itself as one of the relief sources during the crisis. With users marking themselves safe during a disaster on Facebook, it comes up as an important social tool for users. The Safety Check was first included in 2014 during Nepal earthquake that disrupted thousands of lives across the region. With Safety Check, users were able to inform their friends and family about their well being. Arguably, one of the quickest way to broadcast about your condition with active internet connection on your device.

Users will see the following tools when they’re on a crisis page:

Safety Check feature now gets activated automatically by user posts and news coming from third party sources or government. The social media giant brought that functionality earlier this year, though it also resulted in false scares like fake Safety Check activation in Bangkok, Thailand in December 2016 over misidentification of some firecrackers as bombs. A fake news story was responsible for triggering the false alarm on Facebook Safety Check.

Despite the shortcomings, Facebook's Safety Check feature is important for users and communities. It is a utility during the times of crisis as it sends out the message to everyone. Now that Facebook has centralised all such features under Crisis Response, it will be even easier for users to access them during the time of need.