The so-called FAAMG tech companies – comprising of Facebook (NASDAQ:FB), Apple (NASDAQ:AAPL), Amazon (NASDAQ:AMZN), Microsoft (NASDAQ:MSFT) and Google (NASDAQ:GOOGL) – manifest their substantial heft in a variety of ways these days. With over 75 percent of the companies having reported their earnings for the quarter that ended on the 31st of December 2019, a perusal of the resulting data set reveals very interesting findings.

For example, the FAAMG companies have been responsible for the lion’s share of the pertinent quarter’s earnings growth. Let’s elucidate this finding by crunching some numbers.

The table below shows the year-over-year earnings growth of FAAMG companies:

Now, the following table – sourced from Refinitiv – illustrates the cumulative earnings growth rate for all companies in the S&P500 in the applicable quarter: 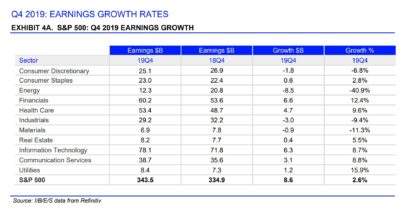 The bar chart below hammers this point home:

However, this is not the full extent of the influence that these FAAMG tech companies currently exercise over the S&P500. According to a recent research note by David Kostin of Goldman Sachs, the FAAMG stocks disproportionately boosted S&P500 results in 4Q 2019. As an illustration, the FAAMG companies witnessed a year-over-year EPS growth of 16 percent for the pertinent quarter. In contrast, this metric stands at a shocking 0 percent for all S&P500 companies when FAAMG stocks are excluded from the calculation! This "mega-cap earnings strength contrasts with small-cap earnings weakness" theme is illustrated in the following chart sourced from Goldman’s research note: 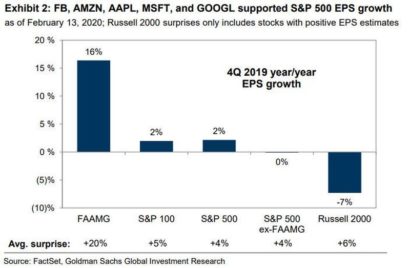 With four of these ‘big 5’ tech companies bearing lofty trillion+ dollar market capitalizations, these findings point to an outsized influence of the FAAMG stocks and an underlying deterioration in the health of an average S&P500 company. Consequently, a shrinking depth, as illustrated by this analysis, does not bode well for the market’s medium-term resilience.

Also, bear in mind that this is the longest uninterrupted economic expansion in recorded history and that a recession is long overdue. One of the indicators of an impending economic slowdown is a corrosion in the health of the small-cap companies. This is not to say that a recession is imminent. Rather, these findings merit continued vigilance as a further aggravation from this point onwards may indicate a higher probability for the onset of an economic downturn.

Of course, the ongoing coronavirus epidemic is also hurting the FAAMG tech titans. With nearly one in ten people around the globe under movement restrictions – over 700 million people in China face these restrictions now – and the attendant deep freeze in global supply chains, the COVID-19 outbreak continues to ravage economies in the region. Moreover, the ‘big 5’ tech companies maintain a substantial exposure to the Chinese economy and, therefore, remain particularly vulnerable. As an illustration, just yesterday Apple announced that a slow iPhone production ramp – due to the closure of factories in China – and the glut in the Chinese market amid an evaporation of demand will result in a revenue guidance miss for the current quarter. If this situation does not improve soon, expect such announcements to be echoed by the other members of the FAAMG club which, given the current level of reliance on these behemoths, does not bode well for the broader U.S. market.