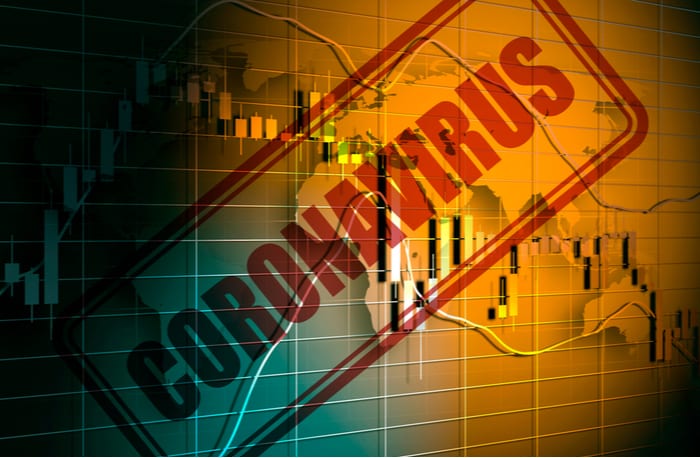 The global tech sector faces a significant plunge in profitability as the coronavirus outbreak eviscerates consumer demand and ravages intricate supply chains. According to the most recent investment note released by the Wall Street behemoth Goldman Sachs, the semiconductors and tech players in Asia remain particularly vulnerable to the impact of the COVID-19 epidemic.

As per Goldman’s estimates, the key assembler of iPhones – Foxconn – faces the most evident risk to its bottom-line profitability, followed by Samsung Electronics, TSMC and other tech players in East Asia. Bear in mind that these East Asian tech enterprises are closely watched by analysts as crucial barometers of global economic trends.

The coronavirus outbreak could not have come at a worse time for chip manufacturers, emerging just as the wider industry was finally moving out of a cyclical downturn and a prolonged U.S. – China trade war.

In calculating the impact of the coronavirus on the profitability of tech enterprises, Goldman Sachs took into account an expected 30 percent plunge in Chinese demand for the 6-month period. It also assumed that the manufacturing facilities will likely remain at 50 percent capacity for an eight-week period that commenced in February 2020. The bank then analyzed a multitude of factors for each company within the context of these assumptions, including estimates for production and shipment rates in China. 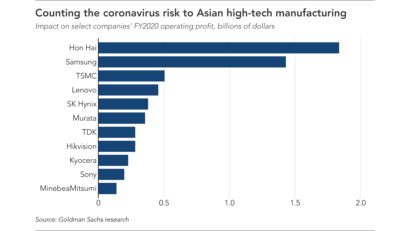 Foxconn, formally known as Hon Hai Precision Industry (TPE:2354), stands to lose $15.4 billion or 8 percent of its FY2020 revenue and $1.8 billion or 39 percent of its operating profits for the year, as per the Wall Street bank’s estimates. The company has already declared that it can presently meet only half of the demand for its products as the operational capacity of its facilities remains constrained.

During a recent investors call, Foxconn’s Chairman Young Liu noted that with the coronavirus spreading beyond China, demand for smartphones and other final products could suffer. He went on to say:

"Given that there are still uncertainties about the coronavirus outbreak, it's hard to estimate the impact for the whole year."

Goldman has calculated that TSMC’s (TPE:2330) annual revenue and operating profit will decline by 3 percent, translating to a $1.4 billion fall in revenue and a $500 million hit to the operating profit. As a refresher, TSMC had predicted that its revenue will rise by 20 percent this year, propelled by investment in 5G wireless networks. Consequently, the company had slated $16 billion in capital expenditure for the FY2020.

In the same vein, Samsung Electronics (KRX:005930) will face a $1.4 billion hit to its operating profit due to the ongoing coronavirus epidemic. However, the end tally may be even greater given that Goldman did not take into account the outbreak’s impact on domestic demand and local supply chains in South Korea.

The biggest tech sector victim of the coronavirus epidemic in Japan will likely be Murata Manufacturing (TYO:6981) – a key Apple supplier of multilayered ceramic capacitors. As per the Wall Street bank’s estimates, Murata’s operating profit will plunge by $355 million in FY2020.

In addition, Japan’s TDK (TYO:6762) – a major battery manufacturer – will likely experience a plunge in its operating profit of around 19 percent given that its facilities are mainly located in China’s Fujian province and, therefore, are currently severely impacted by the coronavirus outbreak.

Goldman Sachs also cautioned in its investment note that while most U.S. companies with exposure to China have slashed Q1 2020 guidance, they have not yet addressed the longer-term or full-year outlook.

Many analysts now believe that a global recession is inevitable, given the scale of the coronavirus outbreak. In fact, this eventuality now forms the base-case scenario for Bank of America. Even Goldman’s David Kostin admitted that:

"The U.S. economy could slip into a recession if the coronavirus contagion lasts for an extended period of time."

In such a situation, Goldman estimates S&P500 EPS would fall by 13 percent to $143 in 2020 and that the index itself would decline to 2450 by the year-end. Already, based on the recent peak, the decline in equity prices has lowered the P/E multiple from 19.4x to 17.0x while the 10-year US Treasury yields have fallen by 80 bp to the lowest level in history – 0.77 percent.