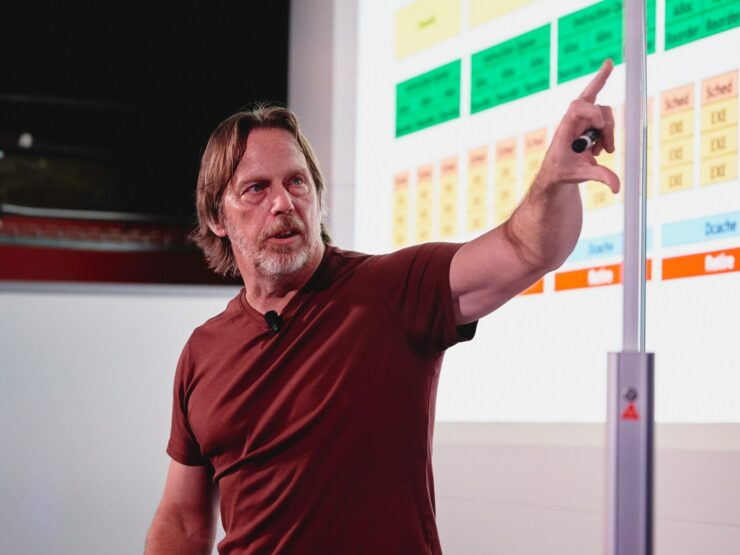 You might have seen Intel's declaration that Jim Keller has left the company, effective immediately, and we have more details for you. Jim Keller was one of the masterminds behind Intel's new architectural efforts and had been with the company for two years when he announced his resignation due to personal reasons.

We have previously been the first to tell you about major Intel moves from Raja Koduri to Karen Walker and keeping our tradition of detailed information on executive movements alive, I was able to acquire a copy of the internal memo from one of our regular sources. The memo reveals some more information about the departure including the fact that Jim did actually resign due to personal reasons (as well as a desire to spend more time with his family according to sources close to him), but also the new structure that will form in his wake.

We can also confirm that a portion of Jim Keller's team will be reporting to Raja Koduri who will be responsible for driving the architectural roadmap:

I am writing to share the news that for personal reasons Jim Keller has resigned from Intel after two years, effective today. Prior to his departure, Jim will take on a consulting role for six months to assist with the transition. I am very sad to see him go and wish him well.

Many of us have witnessed first-hand Jim’s technical strength in CPU design and passion for silicon engineering. He was a champion of our technologists and fearless in his pursuit of innovation. I personally very much appreciated his efforts to help us advance Intel’s product leadership.

Now is the right time to implement a new organizational structure and succession plan to continue our focus on execution, decision-making and innovation. We are creating a nimbler structure with groups formed from teams previously in SEG and IPSG that will provide clear accountability and greater alignment with the business units.

We have a vastly experienced team of technical leaders within TSCG and I am fortunate to be able to draw on this talent as we evolve the team. I am pleased to announce that Sundari Mitra, Gene Scuteri, Daaman Hejmadi and Navid Shahriari will take on new leadership roles reporting to me, effective immediately. Here is a high-level overview of the new structure:

Each of the new leaders will communicate the next level of detail for their organizations soon. In the meantime, we will hold three live webcasts, beginning this afternoon, to discuss the new structure and answer questions. You will receive separate invites for all three, and I hope you can join one of them. If you are unable to join the live webcasts, a replay will be available.

Please join me in congratulating Sundari, Gene, Daaman and Navid as they take on their new roles. Please give them your full support as we begin the next phase of evolution of our world class engineering organization.

The memo also contained a copy of the new heads as well as their bios (there is a lot more detail here than in the short announcement Intel made and I presume these will be uploaded to their public portals shortly):

The first profile is for Sundari Mitra, who will be the Vice President and General Manager of the IP Engineering Group.

Mitra started her career at Intel in the late 1980s as a chip designer on the Intel 286. Subsequently, she joined Sun Microsystems where she drove several UltraSPARC processors from inception to production. After Sun Microsystems, she took the entrepreneurial plunge and went on to launch two successful tech companies. Her first startup was Prism Circuits, which created high speed mixed-signal Phys and Controllers. Prism grew to multi-million dollars in revenue and was acquired by Mosys in 2009. At Mosys, Mitra was the Executive Vice President of Engineering and delivered serial memory SOCs. In 2011, she founded NetSpeed Systems, a SOC fabric IP company. She grew the company to profitability with an impressive list of Fortune 100 customers. NetSpeed was acquired by Intel Corporation in 2018.

Mitra has authored 25 patents and received several awards, including the Distinguished Alumni Award from the College of Engineering at the University of Illinois at Urbana-Champaign in 2017, where she received her Master’s degree in Electrical and Computer Engineering. Mitra continues to focus on mentoring others, particularly women in technology, and technology entrepreneurs.

The second profile is for Navid Shahriari, who will be the CVP and GM of Manufacturing and Product Engineering Organization.

Navid Shahriari is a corporate vice president and general manager of the Manufacturing and Product Engineering (MPE) organization at Intel Corporation. He is responsible for leading the groups that deliver test capability, component and physical debug, and post-silicon product yield and performance management of Intel microprocessors, systems-on-chips, chipset products, fundamentally ensuring competitiveness for Intel’s products.

Previously, as a corporate vice president of the Technology and Manufacturing Group and director of Sort Test Technology Development, Shahriari led the organization responsible for development and deployment of production test technologies for microprocessors, chipsets, systems-on-chips, and board products at Intel.

Shahriari joined Intel in 1989 as a test engineer in the embedded products division before moving to the Technology and Manufacturing Group in 1994. He has held a number of engineering and technical management positions to-date.

Shahriari received his bachelor’s and master’s degrees in manufacturing engineering from Arizona State University. He holds two patents and has authored several technical papers and presentations in the semiconductor test industry.

Daaman Hejmadi is corporate vice president and general manager of the Client Engineering Group (CEG) at Intel Corporation. In this role, he leads a team focused on the design and delivery of next generation client, device, chipset products as well as the company-wide delivery of EDA tools, flows and the design platform for internal and external foundry nodes.

Most recently, Daaman served as general manager of the Infrastructure and Platform Solutions Group (IPSG), where he led the development of IP and post-silicon execution for Intel’s design teams. Over the last four years at Intel, Daaman has served in several executive leadership positions, including leading Intel’s SOC and IP design technology teams, as well as Intel’s validation and manufacturing development capabilities.

Prior to re-joining Intel, Hejmadi serves as vice president of engineering at Qualcomm, where he managed the company’s Bangalore Design Center, with responsibility for delivering a broad array of devices and services across the company’s portfolio. Before joining Qualcomm, Hejmadi worked at Intel for more than 16 years. He served as the Bangalore chipset engineering director, where he built and led a team to deliver high-performance Intel Xeon chipsets. Additionally, he contributed to several Intel microprocessor designs for the data center.

A veteran of the semiconductor industry, Hejmadi has more than two decades of management, business and technical experience in the cellular, connectivity, computing and EDA businesses.

Hejmadi holds a bachelor’s degree in physics and electronics from the Sri Sathya Sai Institute of Higher Learning in India and a second bachelor’s degrees in computer science and engineering from the Indian Institute of Science. He also earned a master’s degree in computer science and engineering from the University of Massachusetts, Amherst, as well as an MBA from the University of California, Berkeley.

The final profile attached with the memo was of Eugene (Gene) Scuteri, who will be the CVP and GM of Xeon and Networking Engineering Group:

A veteran of nearly four decades in the technology industry, Scuteri has, in recent years, led the development of seven generations of complex SOCs for communications and network processors focused on wireless infrastructure and radio access networks. He began his career in 1979 at Bell Laboratories and subsequently held various management and engineering positions at companies that sprang from AT&T, including director of communications integrated circuits at AT&T Microelectronics and general manager of the optical networking solutions business unit at Lucent Technologies Inc. More recently, he served as vice president of engineering at Agere Systems Inc., LSI Corp. and Avago Technologies Ltd.

Scuteri joined Intel in 2014 with the acquisition of LSI’s Axxia Networking Business from Avago Technologies.

[This is a developing story and may be updated intermittently]