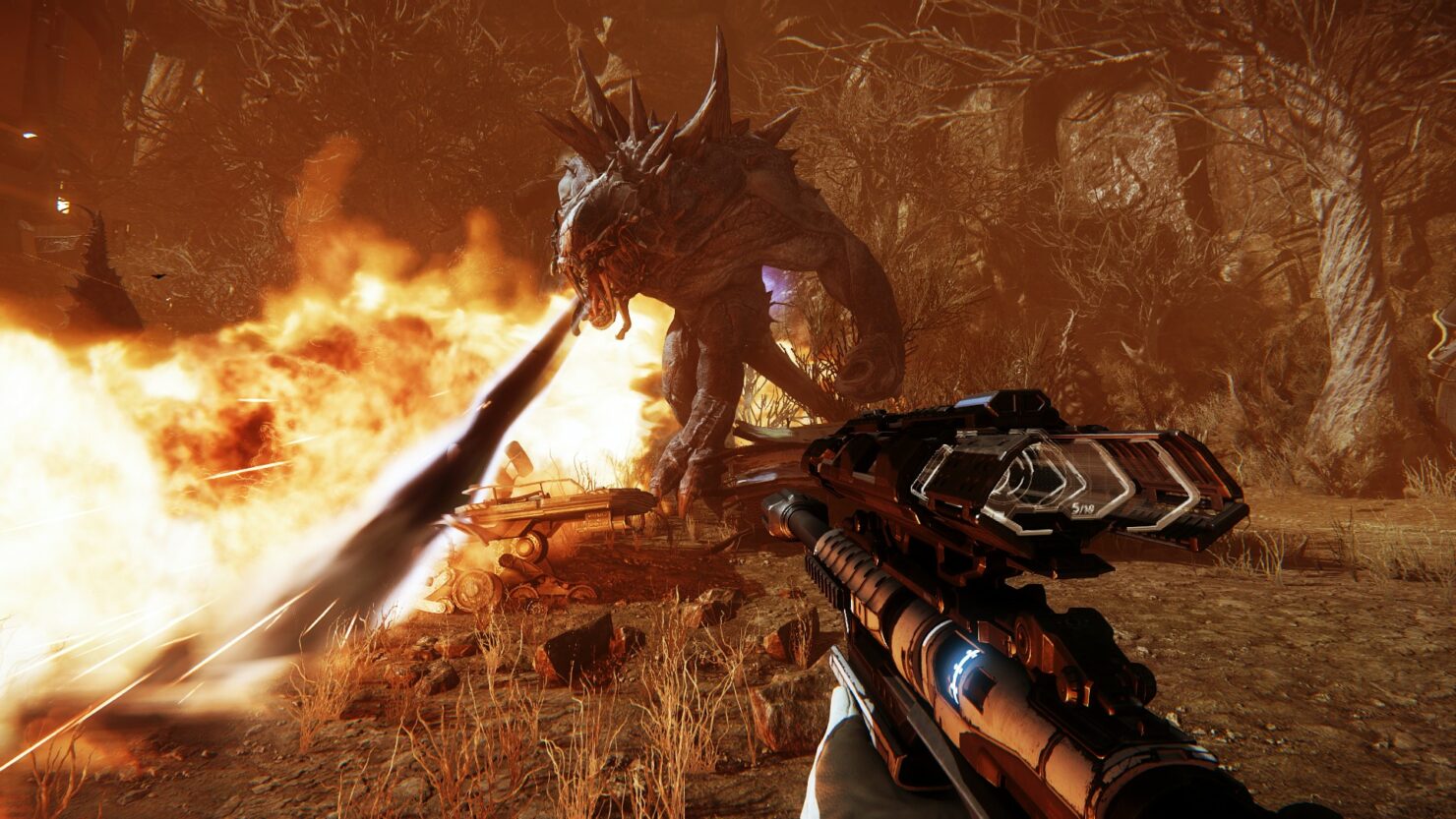 Matthew Colville, Lead Writer at Turtle Rock on Evolve, shared a lengthy Reddit post where he explained what went wrong - at least from his point of view - with the game.

As you might recall, Evolve turned out to be a commercial failure despite the strong pre-launch hype; in fact, it's recent news that dedicated servers and the free-to-play version of the game will be turned off shortly as well, in September.

According to Colville, Turtle Rock initially wanted to create a cooperative game but publishers demanded a competitive twist to get it funded. However, the development team never really managed to balance the asymmetrical 4v1 fight and apparently they were stopped from delivering quick fixes as needed, for example to patch exploits.

We built a team to make a world. When I came onboard the artists outnumbered the programmers. And I think this was true for a long time. When I toured the office for the first time and saw the team, all the artists were watching David Attenborough documentaries and reading books about biology and anatomy and evolution. We believed we were making an alien world you were going to explore, and we intended to make it awesome. I can't even express the number of amazing creatures and behaviors we designed and implemented and then threw out because they were all a distraction.

That was the team we had. That team could have made a co-op game where four players explore a savage alien world and I think it would have gone down as one of the great games of the decade.

But there was no way to get that game greenlit. No one would pay us to make that game. The hook we pitched--and which we 100% believed in by the way--was 4v1.

You see, when you pitch a game to a publisher, they think the most important thing is "what is unique about this game that no one can get anywhere else?" So "it will be awesome and people will love it and it will sell 10 million copies" is not an answer, even if it's true. It has to have something they can put on the back of the box that separates your game from every other game.

Now, they don't hold their own games to this standard. They are perfectly happy spending $60m on the fifth sequel to something they already own developed internally that is indistinguishable from every other iteration of the same game. It's only YOUR game they hold to this somewhat absurd standard.

Well, 4v1 was awesome. It sounded awesome, everyone loved it, we prototyped it, and it worked. Sort of. A friend of mine said very early, and I think he was right, "the reason it works is because we are all roleplaying playing Evolve." In other words, we all knew how we WISHED the game would work, and so that's how we played it.

When someone on the team finally got tired of this and started playing to win, it all sort of fell apart and never really recovered.

The fact that all the heroes were A: all different from each other, mechanically, and B: all the monsters were each different from each other, mechanically, AND neither Heroes nor Monsters used any of the same mechanics! Made it very very hard to balance new heroes and monsters. Like, the existence of Lazarus meant a lot of stuff we wanted to do, had to be super watered down because Lazarus broke all the rules. Maggies' pet trapjaw broke all the rules.

Heroes didn't have to feed. Heroes didn't level up. Heroes didn't pick abilities. It wasn't just asymmetrical, the two sides were playing fundamentally different games. That was a problem we never solved, it was always a problem. It meant all new content was a colossal pain to implement, forget balance, just implement. Just take this cool idea for a hero or a monster, and implement it. Super hard. Because there was always some other hero or monster ability that borked your stuff.

None of this would matter if the monster wasn't playable. If the monster were purely AI controlled, we could have made a much different, more fun, more engaging game with much much wider appeal. A 4 player co-op game where you explore an alien world and fight giant monsters, the giant monsters just aren't controlled by a player.

If you could hold all the game's unique features in your head, if you could play the game on its terms, rather than either A: yours or B: the genre's then it was often really fun. There was a very insightful review that said: "we always complain we want something new, well Evolve is actually new." Nothing in Evolve worked the way the same items in other games worked. The sniper rifle didn't one-shot anything, it just put "weak spots" on things, so your allies did more damage. Now, this is perfectly in line with the co-operative nature of the game. A dude who can one-shot a monster has no place in Evolve. But it's not how anyone expects a sniper rifle to work.

So, we never really solved 4v1, it causes more problems than we ever imagined, and we didn't really have a team to make a competitive shooter. We had a team to build a world.

B: If your customer needs to find four friends to enjoy your game, maybe don't charge $60 for it. Because getting your friends to spend a total of $240 on a game (and you already spent $60 remember) is a hard fucking sell. Any other shooter, you can play by yourself and be an asshole even on a team and have fun. But Evolve, you have to co-operate. You can't jungle for 20 minutes by yourself, ganking every once in a while, or mid and ignore everyone, you have to actually cooperate, from the moment your boots hit the ground, and you never get to STOP cooperating and that only really works if you're playing with your friends.

So give the game away. Charge people for cosmetic stuff, but make the game free. Maximize your user-base. We were already thinking about this. We knew this, and THQ knew it. Alas, THQ went tits up.

C: If you release a game that lives and dies on online competitive play, maybe let the DevTeam update the game more often than once every three months.

In spite of EVERYTHING I said above, I sincerely believe there was nothing wrong with Evolve at launch we couldn't fix if we could update the game live. We had a great launch, tons of people bought the game, tons of people were playing it. They'd discovered exploits and...we couldn't do anything about it. As news of these exploits propagated, the user base evaporated. We had local fixes, often in 24 hours...couldn't deploy them.

The reportage surrounding the release didn't really have anything to do with Evolve, as far as I could tell. It had to do with the zeitgeist of gamers at the time, and Evolve was the punching bag they chose. Websites were reporting on the cost of our DLC, and what it did, and were demonstrably wrong. Just...not true. Writers imagined nightmare scenarios, posted them, got clicks, and moved on without checking to see what was actually happening.

That was depressing but a lot of people bought the game and played it. That cheered us up. Tons of fans and fan art and fan sites and even cosplay, but it cost too much so folks who liked it couldn't get their friends to buy it and we couldn't update the game to make the people playing it happy.

Last we heard, Turtle Rock was juggling a co-op dark fantasy FPS supposedly due this year (though it seems unlikely as we haven't seen anything about it yet) and new VR projects.