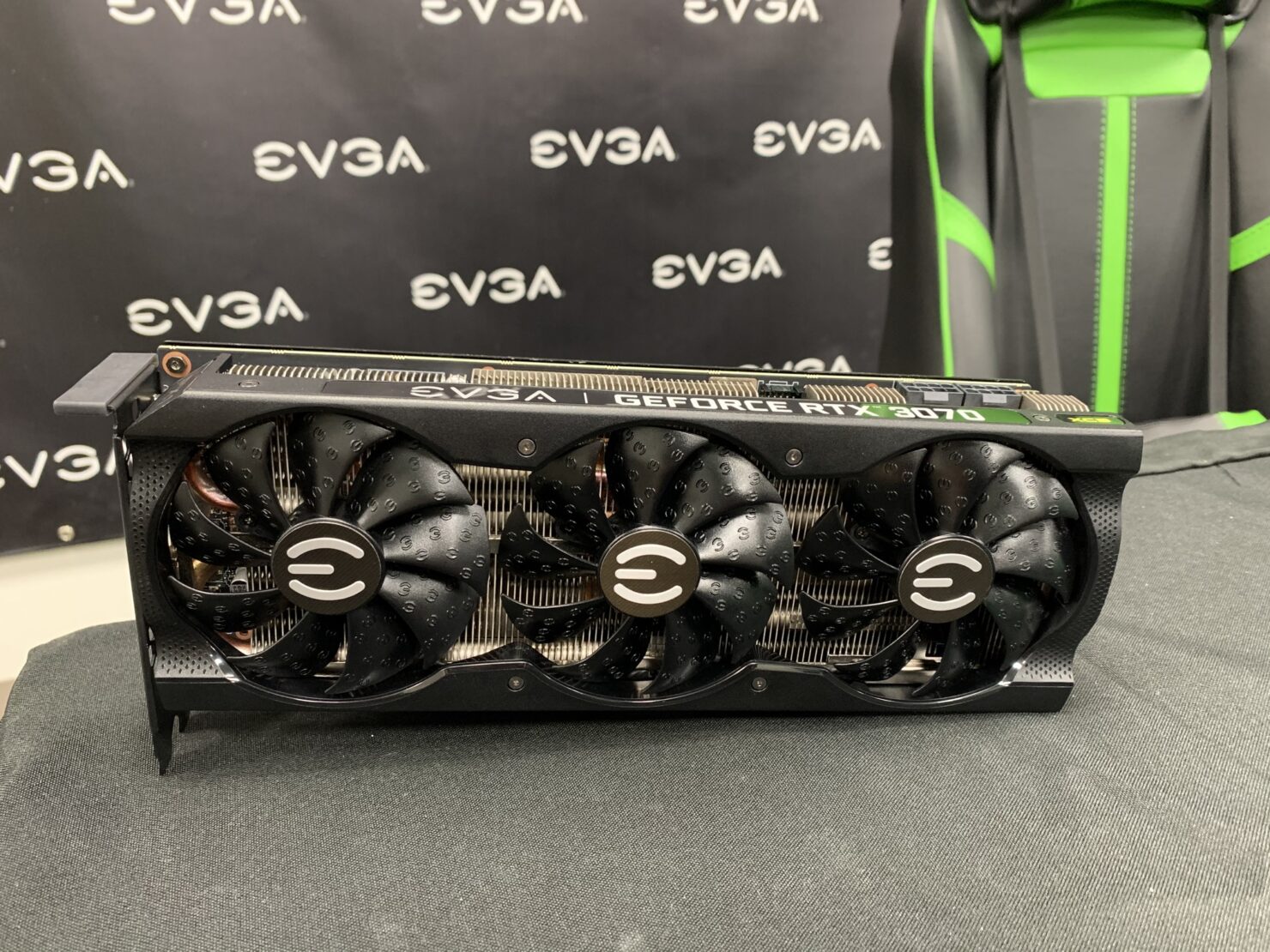 EVGA has provided a much closer look at its next-generation GeForce RTX 3070 XC3 graphics card which launches in October. The graphics card was revealed in a picture by EVGA's very own, Jacob Freeman, who tweeted it out, giving us a better look at the card.

With that said, the EVGA GeForce RTX 3070 XC3 is impressive on its own, supporting a 2.2 slot form factor and featuring a fully custom PCB design. The card makes use of a triple-fan cooling solution and from what can be seen, the card houses a large aluminum heatsink which has multiple copper heatpipes running through it. The shroud and backplate come in a matte black color with a curved aesthetic added on the shroud's front and back-side.

According to Jacob Freeman, the size of the XC3 variant should be 11.2 inches while the FTW3 will measure at 11.8 inches. As for the fans, there are three of those with 9 fan blades on each. There are also small EVGA logos etched on the fan blade which give off a nice design along with the large EVGA stickers in the middle of the fans. Previous renders of the card showed a standard display configuration of three DisplayPort 1.4 and a single HDMI 2.1 connector on the card.

The EVGA GeForce RTX 3070 is powered by the NVIDIA Ampere architecture. Built with enhanced RT Cores and Tensor Cores, new streaming multiprocessors, and high-speed G6 memory, it gives you the power you need to rip through the most demanding games at 1440p resolution. Combined with the next generation of design, cooling, and overclocking with EVGA Precision X1, the EVGA GeForce RTX 3070 Series creates a definition for ultimate performance. via EVGA

The dual 8-pin connectors are standard for custom RTX 3070 designs as the Founders Edition card makes use of a single 12-pin connector. We can expect a nice factory overclock from this model with extra head-room for those who want to further push it to its limits.

Pricing should be close to $499 since this isn't the top model in EVGA's stack and if the card is faster than the RTX 2080 Ti out of the box, then it's a solid card at that price. Obviously, we'll have to wait for the reviews for the GeForce RTX 3070 in October to find out how the card performs against the last-generation flagship while RTX 3080 and RTX 3090 reviews are expected this month.