Pretty much every nation in the world has been struggling to figure out a way to tax digital profits. The story we did on the EU's plan a few weeks ago shed a bit of light on it. At the time the EU stated it would be "in the 2 to 6 percentage" range. Well now we have a bit more specific detailing of where in that range their tax plan will fall.

Tuesday the EU announced a possible approach to fix the problem of just how to tax digital giants such as Google (NASDAQ:GOOGL), Amazon (NASDAQ:AMZN), Facebook (NASDAQ:FB), Uber etc. The plan they announced is a 3% blanket tax - with a few caveats.

Its a bit different than most taxes as its a very targeted approach; meaning only the largest tech firms would be hit with this tax. Their definition would be any firm that has a total rollover of at least $900+ billion with at least $62 billion in EU revenue.

Also a bit specific is that it will only be imposed strictly on income from online advertising, the sale of user data and the connecting of users to one another. 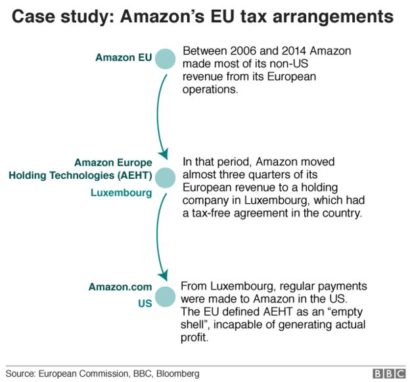 The fact that all 28 nations must vote for this means it may ultimately be nothing more than loud chest thumping on the EU's part. Germany has already cooled on its support.

“The fact that the big digital companies are American doesn’t make things any easier, especially in the current environment”, said a German official. “We think this is a difficult technical issue, but it’s a highly political one too and that is why [EU leaders should] openly discuss it.”

If Germany backs out, and the tax havens themselves like Ireland and Luxembourg don't support this measure then it will never stand a chance as being passed.

The EU is set to attend a summit Thursday March 22nd to discuss this proposed "tech tax" as well as a coordinated response to Trump's new tariffs on steel and aluminum. We should have a better idea by Friday if/when this initiative will have a hope of panning out.