Want to enable iOS 9 picture in picture mode on any iPhone, iPad, iPod touch? Then here's how you can do just that.

iOS 9 is a feature packed release and on the iPad things take a sharp turn for the better when you come to realize that tablet users get more bang for their buck in the multitasking arena. But not all multitasking features are available on all devices, such as picture in picture mode, which allows you to float a video pane over any app by a simple press of a button. If you want picture in picture mode on any iPad, or any iPhone or iPod touch as well, then you can do so by making use of a handy jailbreak tweak which goes by the name of Pegasus.

The Pegasus tweak is extremely simple yet so powerful in what it does, as it enables a feature for all devices which is otherwise locked down by Apple on a system level. And the attention to detail is marvelous as well, as the detachable video pane comes with a bunch of handy set of controls, such as pause, close and of course, un-detach.

Once installed, and ready to be used, you'll see a new button next to the pause button of the video you're playing, allowing you to detach the whole video pane without much fuss. And speaking of installation, there are absolutely no options to configure for Pegasus - you simply download it from Cydia, install it, and you're good to go. 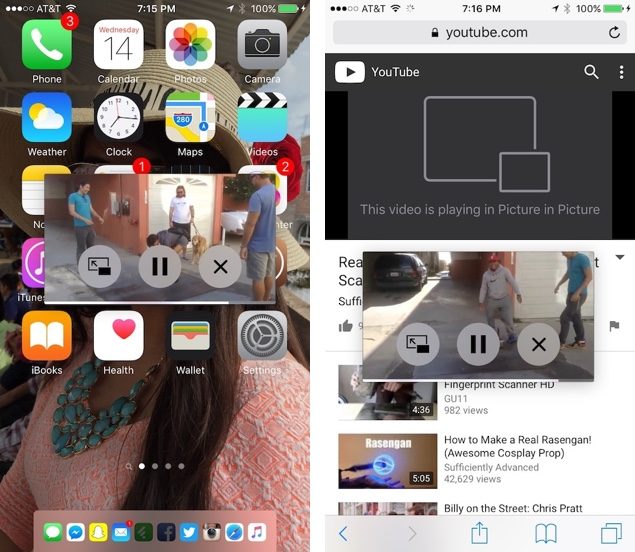 In case you're wondering at this point - Pegasus does work with FaceTime calls, allowing you to be anywhere in iOS 9 without having to pause the conversation at any point.

The Pegasus tweak is available to download directly from the BigBoss repo in Cydia, and requires you to have a jailbroken device at hand in order to install it. Lastly, the tweak comes attached with a price tag of $2.99, which is quite steep, given that the tweak does one thing, and one thing only. But still, given the amount of power it gives to the user on a device which is otherwise unsupported by Apple in the picture in picture arena, the price is somewhat justified.