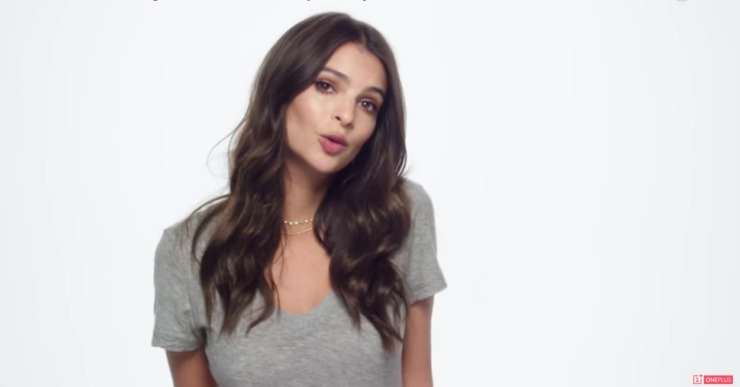 As smartphones evolve, manufacturers find new and unique ways to execute different tasks. One of these, charging, remains a highly controversial issue. Samsung learned this the hard way, when alleged battery malfunctions on the Note 7 led to a complete pullback of the lineup. Batteries remain the one smartphone element that have seen little innovation over the past couple of years. We have however, seen improvements in charging speeds, courtesy of technologies such as Qualcomm's Quick Charge, Oppo's VOOC and One Plus' Dash Charge. Today, Emily Ratajkowski's decided to show us how Dash Charge works.

If you're anything like us, school definitely wasn't your forte. It wasn't ours. That's why we've taken to explore the dark recesses of the tech world for any information on upcoming flagships. And we're good at it too. Here's to Mrs. Hendereson who though math was necessary in life. Part of what made school boring was the lectures. There's only a select amount of time the human mind can focus on how an atom ends up sharing eletrons when bonding.

Still, if our teachers were anything like Ms. Ratajkowski, we'd have aced all our classes. I sure would've. Today, she's explaining how OnePlus' Dash Charge works. For the uninitiated, Dash Charge is OnePlus' brand of fast charging. While Qualcomm's Quick Charge uses more volts, Dash Charge and Oppo's VOOC use more amperes. OnePlus claims that it's more efficient and reduces the chance of battery malfunction.

One Plus debuted Dash Charge quite a while back. It uses the Voltage Open Loop Multi-step Constant-Current Charging. The tech is aimed towards reducing heat while charging, and works via the charger. With Dash Charge you'll be able to use your smartphone for an assortment of tasks without worrying about any overheating problems. The technology behind it is Oppo's, with OnePlus' yet to develop its own wall chargers. Also, with Dash Charge, while you'll be able to get 60% battery in 35 minutes, it'll take 40 more minutes to go to full charge.

That's because the charger automatically reduces amperage as your battery fills up and starts to resemble Samsung's Galaxy Note 7. There's also a micro-controller inside the phone that constantly monitors charge percentage and amperes being delivered. It's a cool mechanism but your phone needs to have good battery life for it to work properly. Since Ms. Ratajkowski claims that she's a tech lover, we're certain that she's aware of these facts as well. If not, we hope that some more details were added to her knowledge base. I'd sure be happy to explain in detail. Thoughts? Let us know what you think in the comments section below. We'll keep you updated on the latest.