Electronic Arts (NASDAQ:EA) have reported their second-quarterly results of the 2019-2020 financial year today, posting net revenue of $1.348 billion and generating a net income of $854 million, against an internal revenue prediction of $1.32bn. Much like in the first quarter, the actual net income is a little misleading. Following changes in Switzerland's tax laws, where EA have a subsidiary that acts as their 'headquarter for international business', the company recognises $1.705bn in income tax benefits, $1.080bn in the previous quarter and $625m in the current quarter. 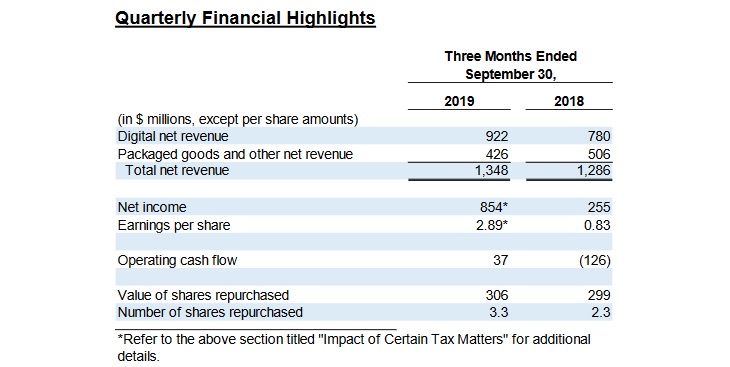 We’re doubling down on live services combined with our core franchises.

This is the line given by COO and CFO Blake Jorgensen both in the financial results and also within the prepared comments by the company. This can be understood as live services are a prevalent feature across the games industry as a whole, where if a game has the content to draw people in, it can generate repeated income at a much lower expense than if the company were to generate another full title. This has been proven by Ubisoft (EPA:UBI) and the success of titles like Rainbow Six Siege and For Honor.

Electronic Arts have also found success in this area with titles like FIFA and Madden, which generate a significant amount of income through the loot box mechanics of Ultimate Team, as well as other live services like The Sims 4, which is consistently updated with new items for players to purchase. Here is the full statement regarding live services by Blake Jorgensen:

The strong results this quarter illustrate the power of our live services and our core franchises. Strength in Ultimate Team, The Sims 4 and FIFA Online drove live services performance above our expectations. Looking ahead, we are doubling down on live services combined with our core franchises. We’re investing in games that people play for longer and engage with much more deeply. This focus will continue to drive growth and profitability for the company through the remainder of this year and beyond.

Further to this, the company has recently revealed a new agreement that will place their titles back on Steam, the service run by Valve, which dominates the PC market. In 2013 Steam had an estimated 75% market share of the digital PC market, though it now faces more competition. In addition to selling their titles on Steam, Electronic Arts are bringing their EA Access subscription to Steam, enabling people to simply subscribe to gain access to their titles while the subscription is live.

All of this makes perfect sense with the trend of revenue sources for Electronic Arts and other game companies in general. Here, EA is predicting net revenue of $5.41bn, of which $4.23bn will come from a digital source. During the current quarter, 50% of digital revenue came from live services, a trend that is likely to remain stable, if not increase as new titles are released and others are updated.

Even when you remove the income tax benefits from the transference of IP to Switzerland and a change in income tax laws there, Electronic Arts have still had a strong quarter. Actual income before accounting for tax benefits comes to $284m, a $29m year-on-year rise from the same quarter last year. Predictions for the year have slightly increased, expected revenue having been raised from $5.38bn to $5.41bn, in line with the $.28bn increase on targets this quarter.

Share prices rose slightly following news of strong results, however, they then later fell and closed down 2.39% to then fall a further 1.99% during the after-hours session. The seeming cause, the announcement that NBA Live 20 was to be canceled, to be made for the upcoming console generation late next calendar year.

Blake Jorgensen had this to say regarding the cancellation of NBA Live 20 and the delay of Medal of Honor VR:

We’re not passing through the full beat, primarily as the FX headwind has increased significantly and we have pushed NBA Live 20 and Respawn’s VR Medal of Honor title out of the year. Together, these headwinds amount to approximately $100 million against our original expectations for net bookings.

Electronic Arts are facing a number of challenges over the current and future financial years, irrespective of the cancellation or postponement of some of their smaller titles. First and foremost are challenges against the company's biggest revenue generator: loot boxes. Even just recently the UK Parliament's DCMS Committee has recommended that loot boxes be classed as gambling, with more and more issues surrounding the mechanic gaining visibility.

The company is working with this, to an extent, with titles that were never expected to be major revenue earners in the form of loot boxes such as the recently released Plants vs Zombies: Battle for Neighborville and the upcoming Need for Speed Heat not featuring the mechanics. The concern for Electronic Arts, as well as others like 2K - parent company Take-Two Interactive (NASDAQ:TTWO) - which have a large focus on similar systems, are of further public backlash and regulations from even more countries.

In addition to this, Electronic Arts is facing an image problem against their titles, following the critical failure of Anthem as well as the number of issues surrounding Star Wars: Battlefront II. While these issues can be short-lived in the minds of the public, the company will be looking to generate goodwill with the release of strong titles. The recent Plants vs Zombies is one such title, with the upcoming Star Wars Jedi: Fallen Order being developed by Respawn Entertainment, a developer with a lot of support from the audience following the success of Apex Legends.

With regards to product launches in fiscal 2021:

● We will add at least one more sports title to our annual slate;
● We will launch Medal of Honor VR;
● We’ll deliver some exciting remasters of fan favorites, including the Command and Conquer game we’ve already disclosed;
● And we have two new unannounced EA Partners titles coming from third-party developers.

In addition, we have other unannounced titles in the FY21 slate - we will give specifics nearer the time

Should the company avoid recent pitfalls, it has a very strong line-up for the current and future financial year, including a Battlefield title for the 2022 FY. You can expect Electronic Arts to remain reliable and consistent in output over the current years, if only due to their sports titles, the move of their titles and subscription service to Steam on the PC and titles in popular franchises like Battlefield, Star Wars and, potentially, Command & Conquer. Should these remakes of older titles prove successful, you can also expect to see new releases in the same franchises.

All in all, the future is looking bright for Electronic Arts, with a lot of potential for the future should the company utilise the wealth of intellectual property it has at its disposal.