Electronic Arts (NASDAQ:EA) have released their Q1 results for the fiscal year ending March 31, 2020, and it seems the mega publisher is back on solid ground after some shakiness in FY2019. Net revenue was up year-on-year and above expectations at $1.21 billion and net income was an impressive $1.42 billion. Wait just a second, how is income higher than revenue? Well, EA is receiving a juicy $1.7 billion income tax benefit this year, with around $1.08 billion being recognized in Q1. Even without the tax windfall, EA still made $436 million in net income in Q1, up from $319 million last year. Earnings per share surged to $4.75, wildly above industry analyst predictions of $0.01. Yes, one cent. EA’s stock is up around 5 percent in after-hours trading following the strong earnings report.

One of the big themes of EA’s Q1 earnings call was the success of Respawn Entertainment’s Apex Legends. The company claims 8 to 10 million people are regularly playing the battle royale game and engagement with the current Season 2 content has outstripped expectations (despite earlier reports to the contrary). EA has big plans for the brand, with a third season that’s promised to be the biggest yet, Chinese launch, mobile version, and full esports league all in the works. The message is clear – Apex Legends is a core pillar alongside reliable money makers like FIFA and The Sims, with company CFO Blake Jorgensen hoping the game will have a 10-year run. 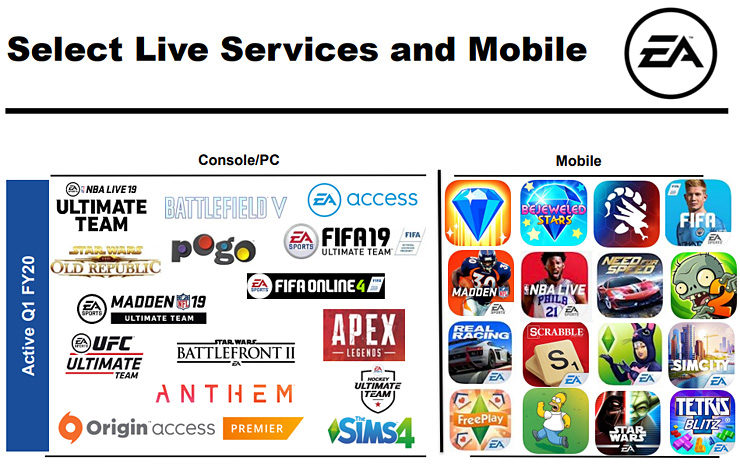 Apex Legends may be the new kid on the block, but the old money-generating standbys – FIFA, Madden, and The Sims – continue to deliver. EA seems to be particularly high on The Sims 4, which just had its biggest year to date, with the game’s recent free promotion resulting in 7 million new downloads. FY2020 will be The Sims 4 biggest year yet in terms of new content, with EA expecting the game to set a new revenue record for the fifth year in a row.

With FIFA, Madden, The Sims, and Apex Legends running along smoothly and the EA Access/Origin subscription services steadily growing, the future would seem to look bright for EA, and yet, the company declined to upgrade their business outlook, sticking to revenue of $1.32 billion for Q2 and $5.38 for the full fiscal year 2020. Part of the reason for their caution could be the one big question in EA’s future – Star Wars Jedi: Fallen Order.

The upcoming Star Wars game is something you don’t see often from EA anymore – a single-player adventure without a major live service component – and reaction to the game at E3 2019 was somewhat muted. Developer Respawn knows what they’re doing, so there’s no reason to panic just yet, but does feel like there’s a chance Fallen Order could be EA’s latest Star Wars disappointment. But if the game is fun, would EA even care that much if it falls below sales expectations? Interestingly, EA’s leadership put an unusual amount of emphasis on the importance of fun and innovation during their earnings call, implying that the solid foundation provided by FIFA, Madden, The Sims, and Apex could allow the company to experiment more in the future. Here’s Blake Jorgensen on the company’s philosophy…

Our evergreen live services provide a tremendously solid base for our business and enable us to invest in new opportunities, innovate, and to take risks. We're unique among our peers in this and it is no coincidence that we are the leader in cloud gaming, subscriptions, and player networks. People will only engage in our games if they have fun playing them and we continue to invest in keeping them fun, whether its major innovations like Volta Football in FIFA or new modes, events, and Legends in Apex Legends, or even just adding laundry to The Sims 4. We aim to give players content they want to play. If we're successful in that, we're successful as a business. The combination of "core," plus innovation, plus fun will drive our success through the year.

Will EA’s solid foundation really result in the company taking more risks? I’m skeptical, but the success of Apex Legends shows investment in new IPs can pay off. Whether EA is serious about experimenting or not, expect continued reliable performance in the near term.

Battlefield 2042 is Bringing Back Classes, Season 2 Coming with New and Revamped Maps Soon