After being thoroughly tested on the Public Test Server, Elder Scrolls Online received the Imperial City DLC today, at least on PC & Mac; it will be out for Xbox One on September 15 and PlayStation 4 on September 16. 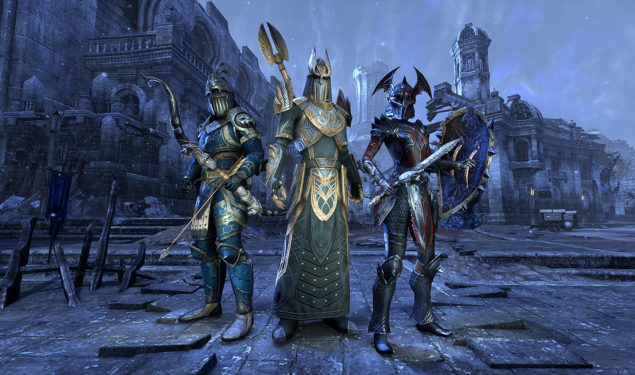 This is the first DLC pack for Elder Scrolls Online, after the game transitioned from the Pay-to-Play model to Buy-to-Play. The Imperial City DLC features both new PvE and PvP content, as outlined by Zenimax:

Featuring six distinct Imperial Districts, battle against the forces of Molag Bal as well as the other Alliances.

Whether participating in massive PVP battles in the Imperial Districts or adventuring in one of the new dungeons, players will be introduced to new quests and enemies, including the Xivkyn.
● Additional Weapons, Armor, and Currency

Fight the forces of Molag Bal to plunder Tel Var Stones, a new form of currency you can use for exclusive Veteran Rank 16 weapons and armor, or search for new Treasure Vaults containing other rare finds.

●Imperial City-Exclusive Collectibles and Items
Exploring Imperial City or visiting the Crown Store will reward the player with a host of new collectibles including pets, mounts, costumes, and polymorphs!

The Imperial City DLC is free for those players with an active ESO Plus membership, while it costs 2,500 crowns to be purchased separately. Check out these complimentary screenshots to get an idea of what you can expect; for the full patch notes (the size of which has been confirmed to be 10GB), you can head to the official forums.