The Elder Scrolls Online Gold Edition Announced, Will Include All DLC Packs

Bethesda announced the upcoming release of The Elder Scrolls Online Gold Edition, which will contain the base game and all of the four major DLC packs released so far.

This will allow new players to gain immediate access to the entire game.

From Skyrim to Daggerfall, this pack allows you to explore the vast world of Tamriel in one package. Travel to Abah's Landing to master the art of thievery with the iconic Thieves Guild, become a deadly assassin of the Dark Brotherhood in the Gold Coast, or ride to Wrothgar and aid the Orc King Kurog in rebuilding Orsinium.

The Elder Scrolls Online Gold Edition will be available for PC, PlayStation 4 and Xbox One from September 9. 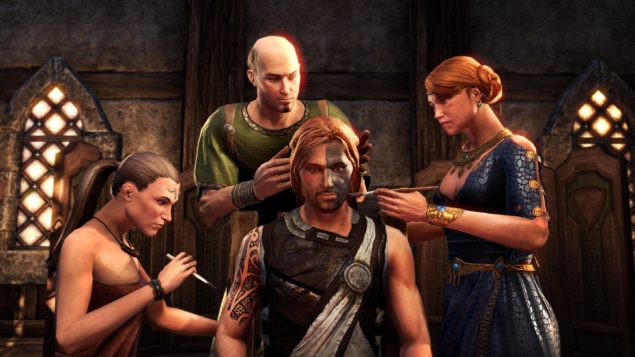 During E3 2016, Zenimax Online announced a new Dungeon Pack for August and Player Housing for Q1 2017. Since then, the developer revealed more details on Update 11 (named Shadows of the Hist).

Beyond the two Argonian-themed dungeons, it will finally be possible to change the appearance of your character as hinted by the image above. Update 11 will be available on PC/Mac on August 1, while PlayStation 4 and Xbox One will get it on August 16.

Everyone likes changing up their looks from time to time. Whether you're yearning for something as simple as a fresh new eye color to a completely new appearance, race, and gender, the new you is now possible with our Appearance Change and Race Change Tokens.

Simply purchase one (or both!) in the Crown Store—look for them in the Upgrades: Service Tokens category. Once purchased, head to the Character Select screen, select the Appearance Change or Race Change Token in the bottom-right of your screen, and make your desired changes. Here's an explanation of how each works:

Would you like all of Tamriel to know you by a different name? Well now you can! Changing your name is simple—navigate to the Crown Store, go to the Upgrades: Service Tokens category, and purchase a Name Change Token. Once purchased, you use a Name Change Token on the Character Select screen to change one character's name.

A bounty of new hair styles, adornments, and markings have been added to the Crown Store. If you're looking for a little something special for your favorite characters, navigate to the Appearance Crown Store category and peruse the new offerings in the Adornments, Hair Styles, and Markings sections. (Please note that some selections are gender and/or race restricted.)

Once purchased, you can change your character's hair style, adornments, and markings as often as you like. Simply access your new appearance items in your Collections menu under the Appearance category. They can be used alongside all your existing collectibles—there's even a pack that includes all the existing hair styles (90+ in all!) available for purchase that will allow you to freely change your hair style to anything that is currently available on the character select screen, as often as you like. (Normal race and/or gender restrictions do apply.)

The long anticipated costume dye system is here! There are two different ways you can dye costumes and hats. Here's a brief explanation of each:

ESO Plus Costume Dyes (Exclusive to ESO Plus)

Take your Tamriel fashion to the next level with costume dyeing! Anyone who has an active ESO Plus membership will have the ability to dye their equipped costume (and hats!) at any Dye Station using dyes unlocked via achievements. Applied dyes are saved separately for each character, so that the same costume or hat can be dyed differently for every one of your characters.

Dyeing your costumes and hats is easy—choosing the perfect color combination is the hard part. Simply approach any Dye Station in Tamriel while wearing the costume and/or hat you wish to dye, select the new costume dying tab, choose dyes from your unlocked achievement dyes window, and save your masterpiece color combo!

Master fashion designers across Tamriel have put together custom Dye Stamps for fashion conscious heroes who prefer the convenience of tried-and-true pre-made color combinations. These one-time-use consumable items are available for purchase in the Crown Store for a modest price. Look for them in the Crown Store category.