Now that gameplay has finally been revealed for Elden Ring, the long-lost mystery of what Miyazaki and GRR Martin's collaboration can finally be brought to light. In many ways, Elden Ring remains firmly along with the pantheon of Souls games with innovations all its own. Rather than rekindling the bonfire, the chosen Tarnished that the player portrays instead is tasked with restoring light to a fantasy world not unlike what's been seen before in Dark Souls thrice before.

Five different character archetypes are available to experience in the Elden Ring Closed Network Test. I went with the Wolf, a mixture of medium armor, a two-handed sword, and a lightning elemental surprise in the first item stash that imbued my weapon with an element as well as the ability to cast a lightning bolt when the greatsword is wielded in both hands. Something I found immediately fascinating was the ability to wield either weapon's equipment in both hands, so you could readily two-hand that small buckler shield if you so felt inclined (as someone that regrettably skipped over Dark Souls 3, I had no idea this was a previous feature).

Weapon upgrades are more straightforward than ever before. In prior Souls likes, weapons would be upgraded on an individual basis. Sometimes a weapon would have to be leveled up to +5 or more before transfixing a keyword like Keen or Magic to modify their effectiveness. Elden Ring streamlines it in a way that embodies experimentation more than ever before. Through reusable upgrades, players can infuse weapons with the spirit of a weapon, giving it the effectiveness of a Keen upgrade and modifying weapons with a unique secondary attack. Weapons are limited by which upgrades they can take, so weapons like Scimitars can take the usual Magic upgrades and modifiers but other times, you'll discover that heavier weapons might not take the same upgrade kits. As players should expect from Souls upgrades, modifying the weapon will also change the affinities and weapon scaling, so sometimes it can be best to upgrade the weapon to match your stat builds no matter how you want to play Elden Ring. 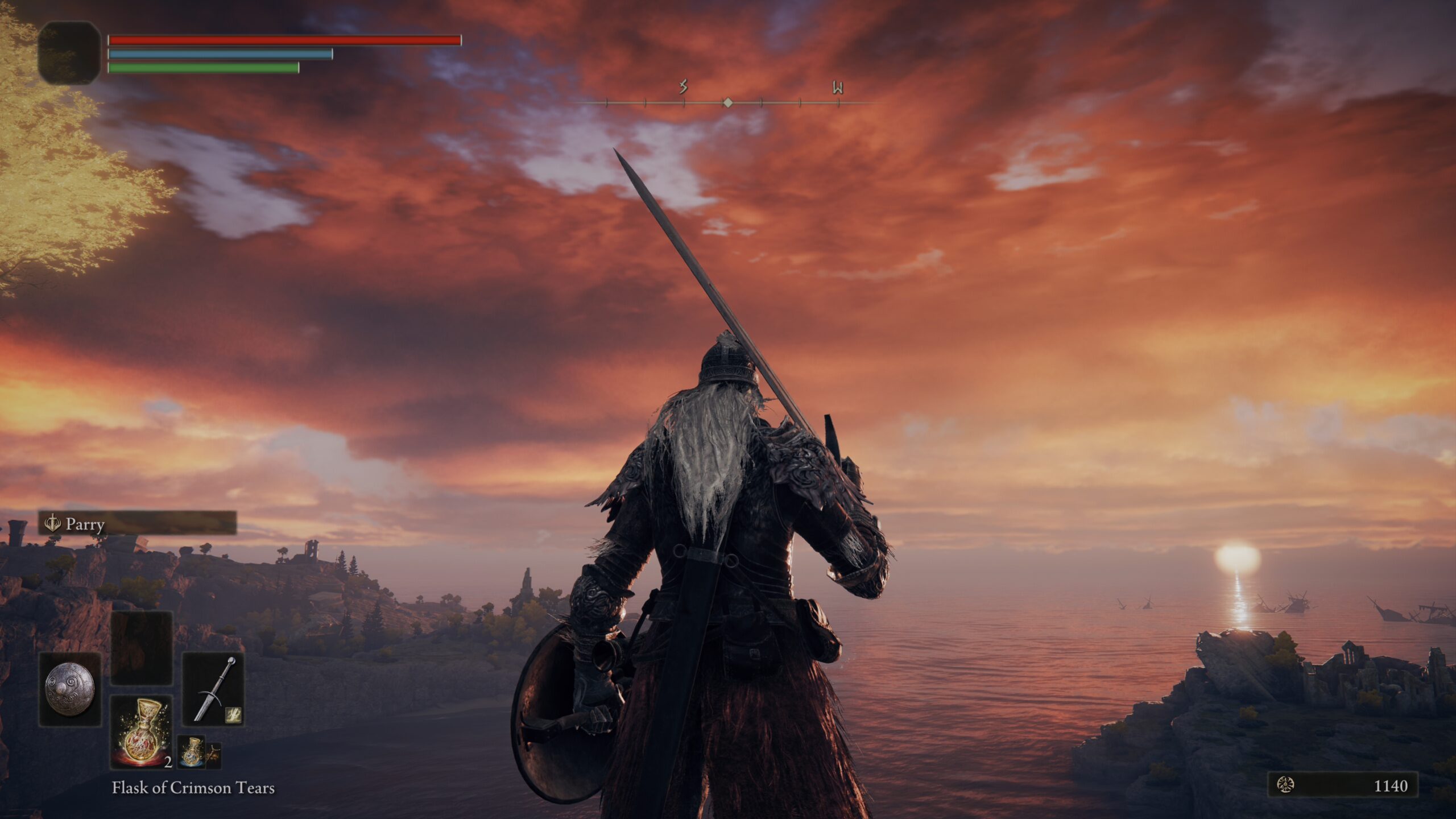 Transitioning from handcrafted levels to an open-world design doesn't mean that players should expect Elden Ring to be any less intricately designed. From the moment you step out of the initial dungeons onto the lush green grass that fills the world, it's plain to see that the amount that From Software has been developing Elden Ring has been spent making one of their most ambitious titles to date. Sekiro: Shadows Die Twice emboldened the player with an open design that gave players more angles of approach than the tight confines of Sen's Fortress when it mattered, but Elden Ring takes it even further. That open-world sends the player off, first with an NPC and a brief tutorial on summoning player allies to journey alongside yourself or to submit yourself for phantom duty.

Taking your first steps down from that overlook greets the player with a horseback boss of similar hulking stature as Gyoubu Oniwa standing in the player's way. What separates this boss from his ancient Japanese brethren is that this boss is completely bypassable if you just take a brief venture off in either direction to sneak around behind him. What that boss drops is merely some upgrade materials used to power your weapons up in effectiveness but given that this playable demo limits what resources are earned, perhaps players will be lucky enough to earn his oversized bronze shield instead.

The Closed Network Test for Elden Ring will naturally lead players up to a hilltop castle that signals the next adventure to hunt down a given Lord. It's in areas such as Stormveil castle that show off From Software's prowess for labyrinthian enclosed spaces with multiple intersecting pathways and shortcuts that open up to one another. Those brave enough to make it through to the end are greeted with a ladder leading up to the upper ramparts of the castle and a congratulatory message thanking the player for successfully completing the closed test demo, leaving those surprises for another day. 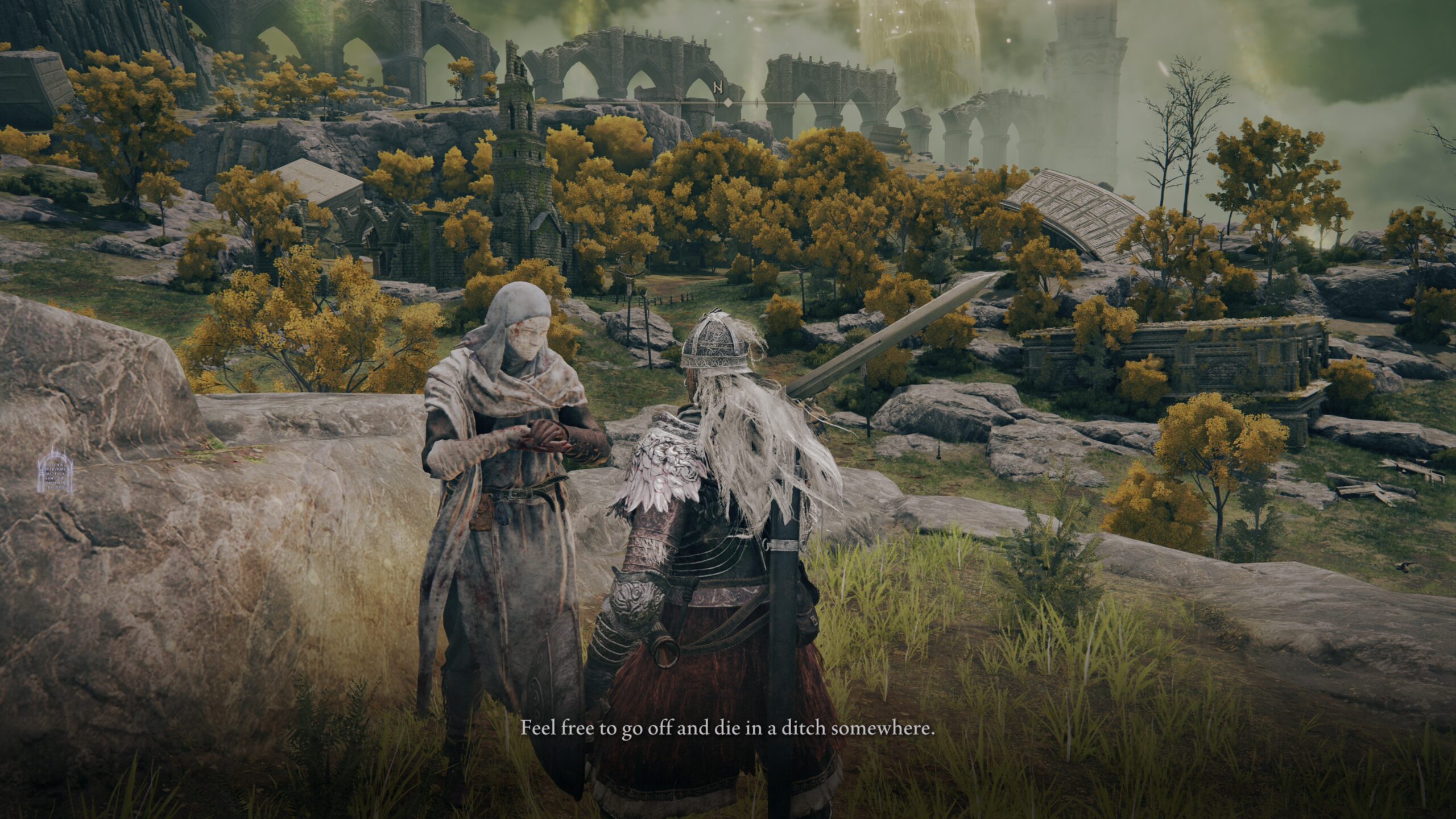 Two of the biggest traversal mechanics added into Elden Ring allow players to bend the knee for the first time in the Souls series. Of course, what comes next is the natural progression of being able to jump, something that From Software has been adverse to for many years because of how intricately designed their levels can be. Those labyrinths can sometimes be evaded by a careful roll or fall from a precarious precipice but never before in a proper Souls game have players been able to get that upward hop added to their limited moveset. Now, I know that this was something that I praised Hellpoint for and I am absolutely looking forward to seeing how Elden Ring will allow players that extra verticality to find secrets littered throughout the world. Oh, and that horse companion of yours can also jump too.

Elden Ring offers an on-screen compass to guide players around but I found it most handy to recover a lost body after meeting an untimely demise. Massive points of interest are instead marked by pillars of light or the glowing sparks from a 'bonfire' in a given direction. The open premise of Elden Ring is on full display the moment you step beyond those cavernous walls with a number of interesting points no matter which way you go. Venturing off to the left takes you down a cliff precipice guarded by a massive troll that can easily take the player out in one or two fell swoops but is nevertheless able to be downed even by a player that has yet to steel their resolve and level up (a task that's only earned at around the third campsite to save). Taking a path to the right instead takes you through a shallow swamp filled with cultists, mini-dungeons with chests filled with loot, and if you venture off in the right direction, you might even come across the first dragon of Elden Ring. Do you stand a chance going toe to toe with a dragon before you've even leveled up? I'll leave that for the Souls veterans that can endure SL1 runs but I never gambled my small pool of runes towards it.

Multiplayer remains a core part of Elden Ring just as much as the Souls pantheon. Elden Ring tries to keep players grouped together in the areas that they wish to explore despite the open world. At select monuments, players can inscribe their sign to be recruited by other players. In order to even see the signs left by other players, a consumable item is needed but Elden Ring gives a full inventory worth so I had yet to see how they're unlocked.

The mystery of Elden Ring is finally unleashed on the world and it won't be much longer for fans to take part in this weekend's network test. For some, Elden Ring may play it too close to From Software's lineage but for fans that are eager for Miyazaki and Martin's signature collaboration, Elden Ring represents the very best of the genre and I can't wait to see what other surprises the open-world holds.

The Closed Network Test will go live for those who've been selected from November 12th to November 15th. The full game launches February 25th, 2022 for PC, PlayStation 4, PlayStation 5, Xbox One, and Xbox Series S|X.