It's refreshing to play a hardcore Soulslike that shies away from the high fantasy setting for something more futuristic. We've seen Deck13 tackle Sci-Fi with The Surge series before but it's rare to see this style of hardcore RPG venture out into outer space. Cradle Games, a small team based out of Quebec, has been working on Hellpoint for the past few years and its launch has finally arrived. 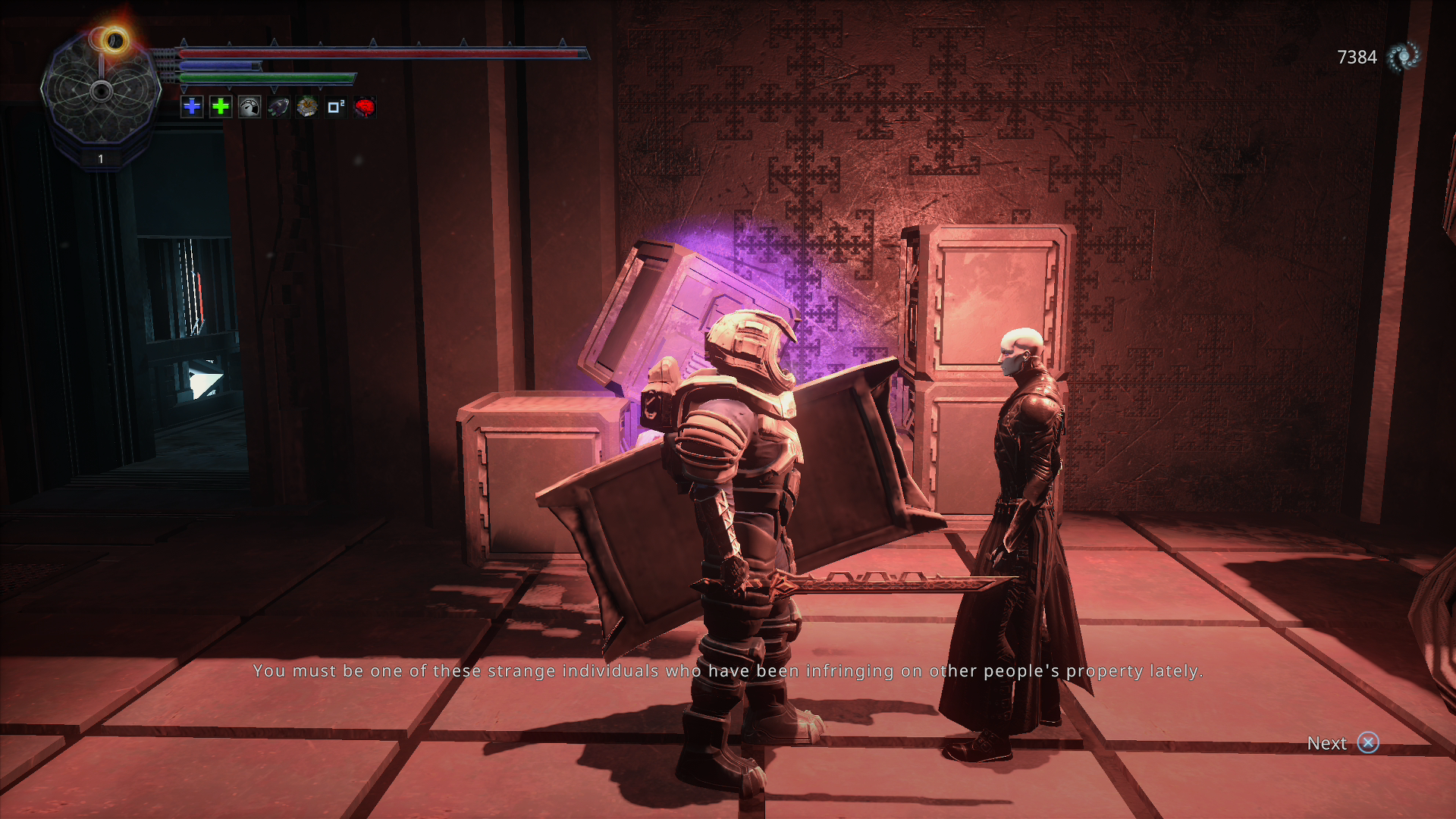 Set upon the nearly derelict space station of Irid Novo, the player takes the role of a 3D-printed version of themselves and set off to discover what set off the cataclysmic events aboard this space colony. In order to unravel the mystery, the player is tasked by a mysterious being known as the Authority to gather data on the events that lead up to this devastation as well as the cosmic entities that were left ruling in its wake.

Soulslikes have a very particular flow when it comes to combat, with blocking, parrying, light and heavy attacks, and having to manage your stamina to handle all of the above. Hellpoint is no exception to this, so combat should feel very similar to that of Dark Souls, although a bit more basic in execution. Most clones in the genre feature health, stamina, and some other form of energy to power that game's version of magic and abilities. In Hellpoint, that third stat is simply called Energy and powers not only magical spells and gunfire but also abilities that are learned for each weapon. Through constant use, each weapon gain proficiency levels that translate into both passive bonuses and one or two additional weapon abilities that use Energy to activate. For the officer's blade that carried me through most of my game, I learned the thrusting manuever as well as a temporary buff that increased the length of my blade as well as its damage. To recover energy, the player has to attack the enemy and gain back a bit of Energy based upon the Leech stat of their weapon. 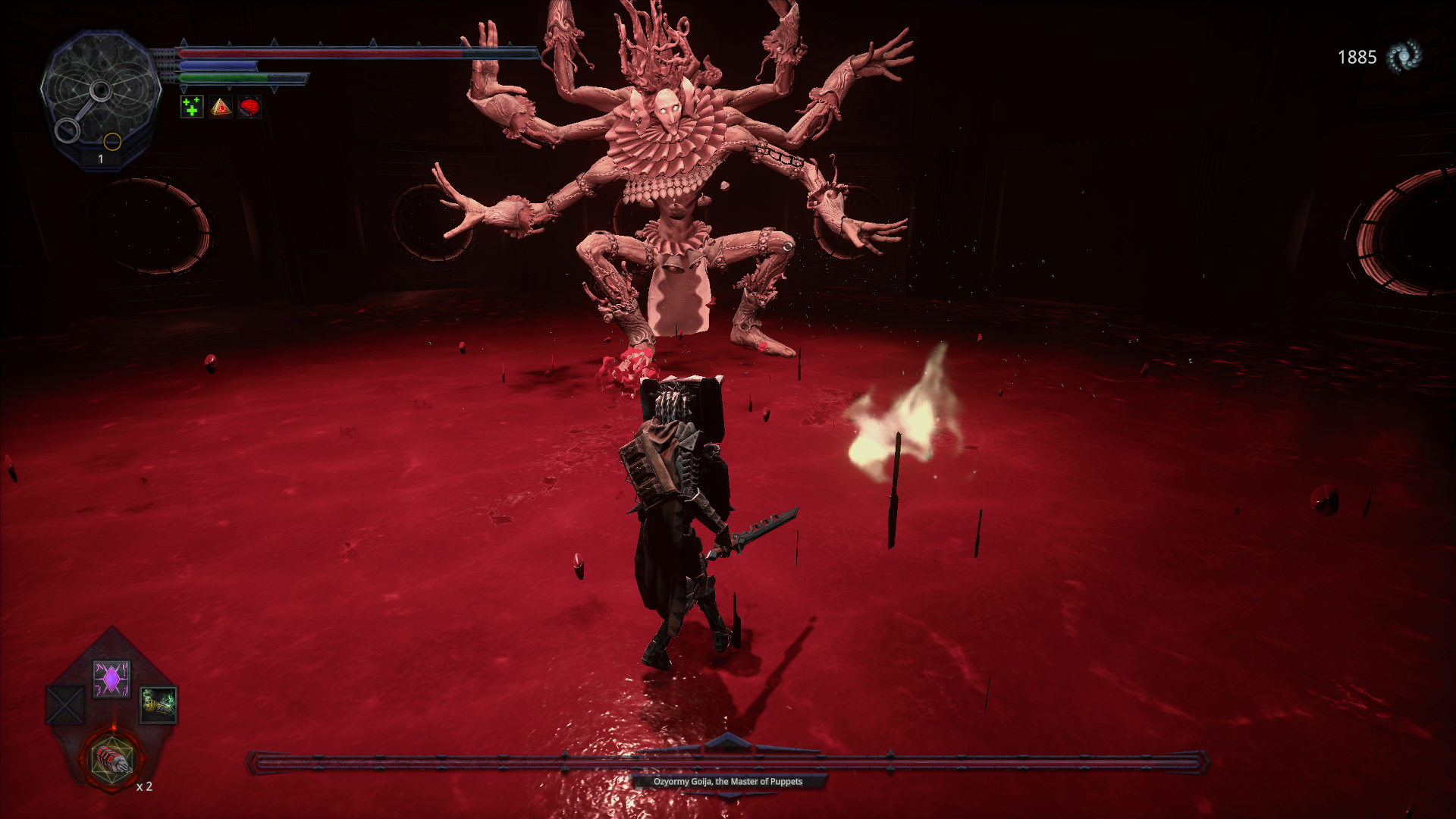 That same Leech stat is also how players recover their healing tools. There are a number of different healing methods to collect, from slow heals over time to injections that recover poison or radiation damage. The most basic of all is your standard flat heal and I didn't see much purpose to picking any other over it for most situations. To charge up your healing, which is leveled up in the same way players might acquire additional Estus Flasks, simply strike the enemy over and over again. Depending on the Leech stat on your given weapon, you'll recover a percentage of an additional charge. This method of health recovery is handy during a boss fight when you can't just leave and come back at your own leisure, but each time you die, you're only reduced to carrying two healing charges. This necessitates a bit of farming before each attempt and can be quite time-consuming if you continuously lose to the same boss over and over again and that's not including having your Ghost chase after you in the meantime.

Hellpoint, as derivative as it often is when it comes to being inspired by the Souls genre, does feature some unique ideas I had never seen before in the genre. The most notable feature is in the sense of time that exists within Irid Novo. As time passes within the floating space station, a clock tracks the current tendency of the world and brings about some unique features. Twice a day (during the 3- and 9-o'clock times), the station passes through what's called an accretion storm that brings about hordes of enemies in specific locations. Fending off these hordes usually rewards the player with unique loot, usually some form of upgrade but also keys to side areas depending on which horde the play has fought. I wish I could praise this system more but the horde fights were among some of the worst performing segments in my entire time in Hellpoint, suffering through single-digit framerates and merely trying to stay alive while half a dozen enemy foes hit the player at once. 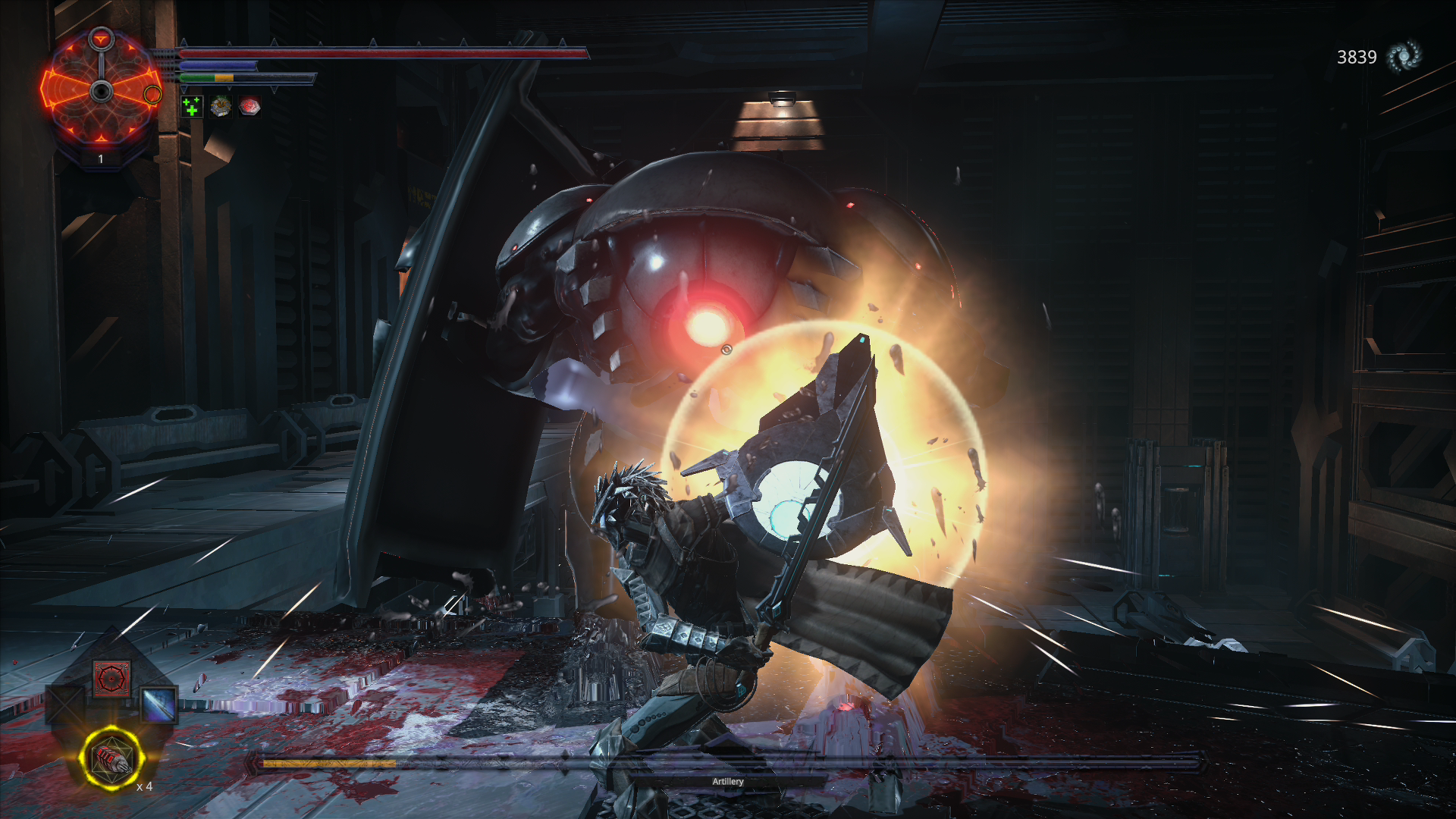 Another mechanic that may make or break the experience for Souls fans is the inclusion of a Ghost left behind after death. This AI version of the player will relentlessly attack the player as they return to collect lost Axions after death and can often be more challenging to defeat than any other enemy in the area. Thankfully they aren't too smart when it comes to platforming and will fall off a number of ledges and gaps throughout the world, but I grew tired of their presence the first dozen times I died and tried to recover lost experience.

The other time-based mechanic to Hellpoint occurs during a 'Black Hole Hour' that unlocks specific yellow fog gated areas (usually a treasure room or unique boss fight). The exact time of these hours changes depending on what location of the station the player is in but sometimes it requires simply waiting around to see if you can enter. Many of these black hole gates do require an optional puzzle to be completed where the player ventures out to the top floor of the Arcology to set up and align towers to navigate a beam of visible light at these doors during the Black Hole Hour. All of the solutions to these ring puzzles are tucked away throughout the world and require two pieces in order to unlock a door (which you won't know which one is unlocked until you experiment for yourself) but here's a freebie for our readers. 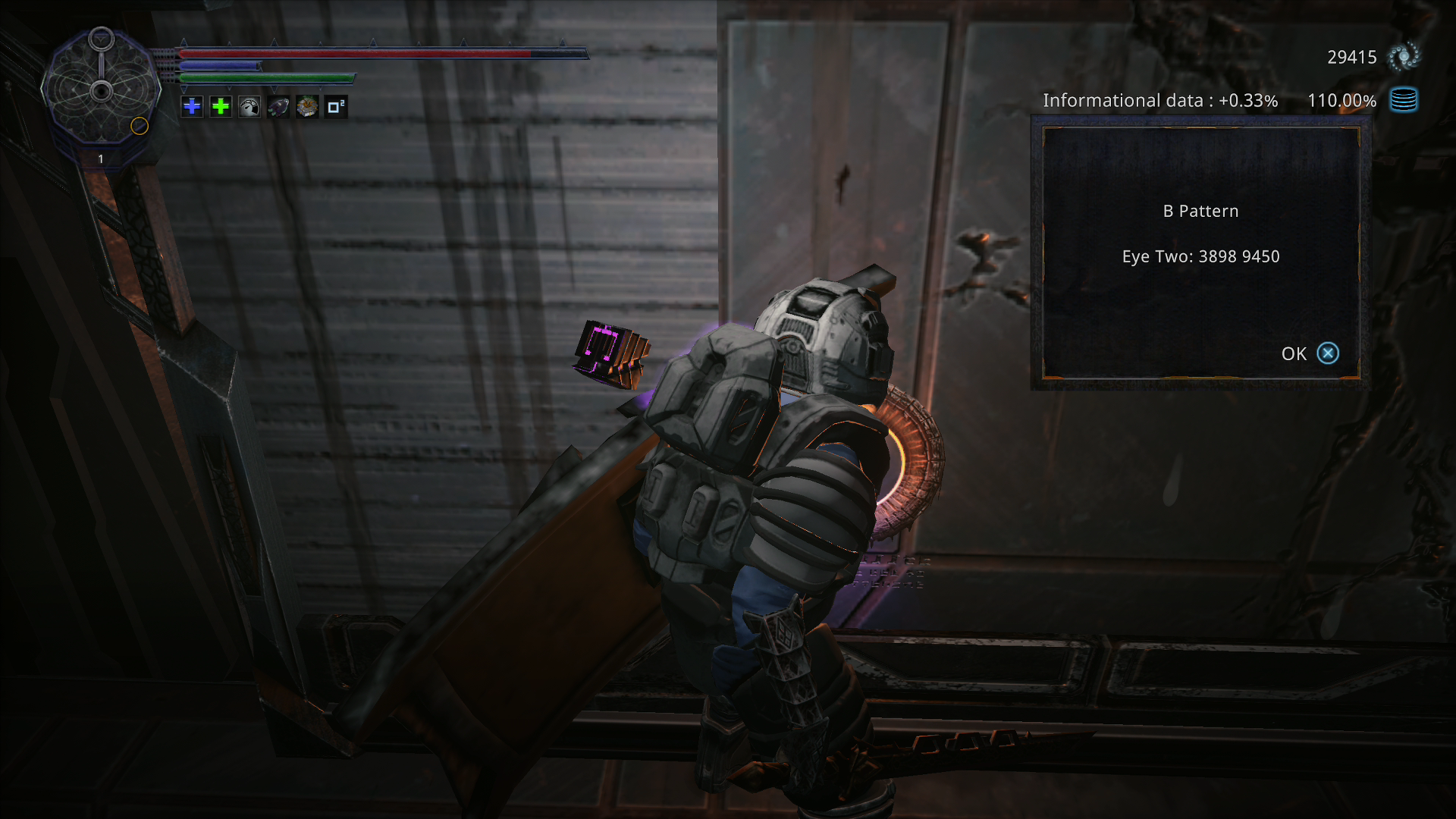 Hellpoint also features co-op play, which isn't too unique for a Souls game. After all, invasions and jolly cooperation have been a major part of Dark Souls for multiple entries now. However, Hellpoint takes it a step further by allowing the entirety of the adventure on Irid Novo to be played together with a player, not just across the country but also from the comfort of your own couch. Split-screen co-op is a native part of the Hellpoint experience and it didn't cause the video performance to suffer too deeply compared to playing solo, so I would certainly recommend bringing along another player just to help divvy up a boss' attention.

Perhaps the biggest elephant in the room for Hellpoint is in its performance. Simply put, a lot of the pre-launch performance is simply not great. The horde-style ambushes tank the performance to nearly unplayable levels if you aren't well-geared in defense enough take a few seconds of unmitigated attacks. Frame pacing can be another constant issue with the console version of Hellpoint and was something that I mentioned in my preview as well. For a masochistic RPG that requires dodging and proper parry timing to survive certain boss fights, the performance can be a very obvious sore spot. Hellpoint's developers have a few patches in the works that should address these issues sometime after launch, but the current state leaves a rough first impression that I still braved through all the way to the secret final boss. 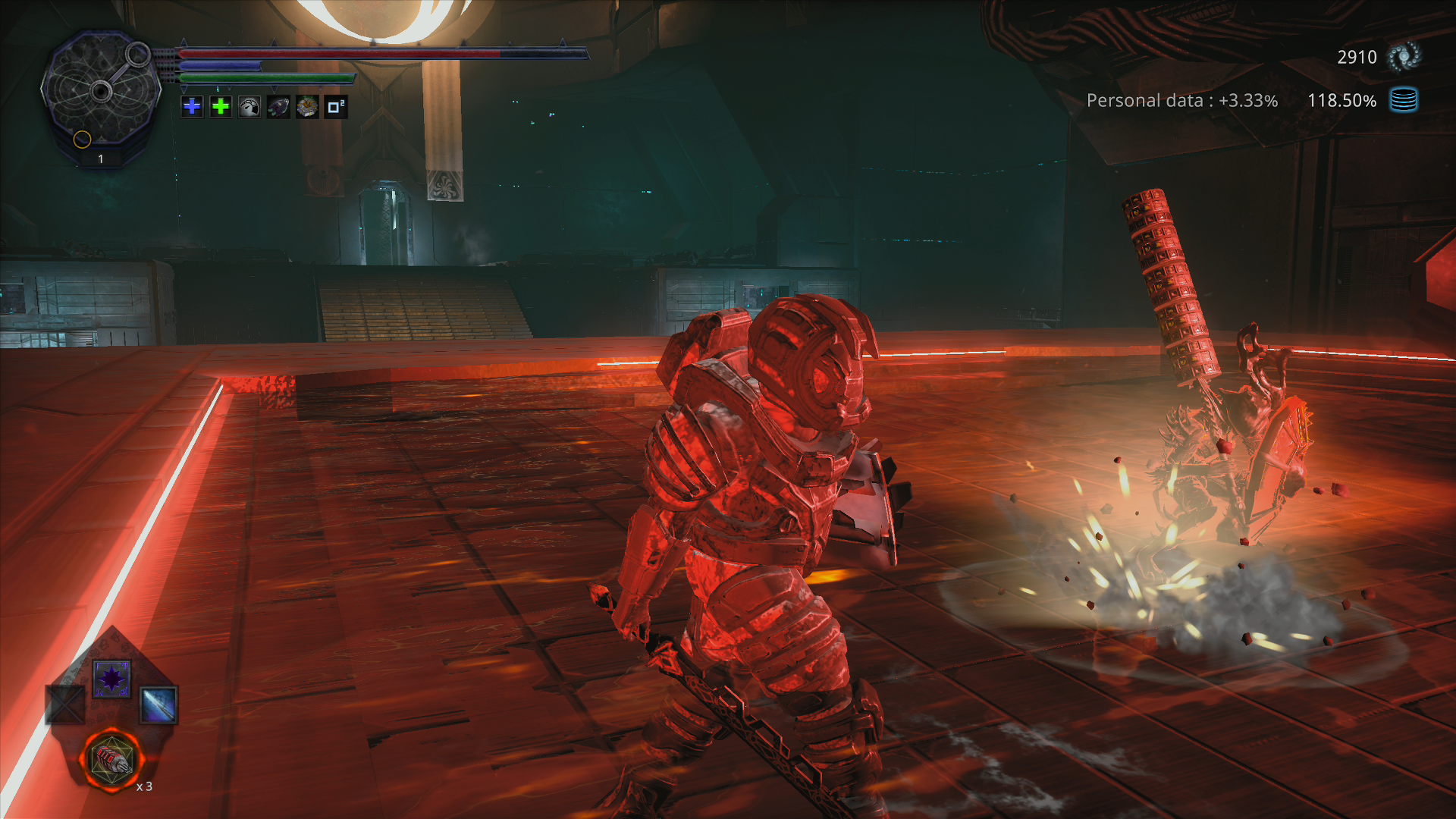 Now that I've expressed my thoughts on the poor performance, I do have to change gears and discuss the environmental designs and puzzles that Cradle Games was able to inject into their sci-fi Soulslike. Built in mind with a jump function, the various levels of Hellpoint have a great amount of verticality that's rarely seen in a Soulslike outside of, say, Anor Londo and the first act of Dark Souls at large. Taking a trip off the beaten path or jumping across conspicuously placed ledges often rewards the player with unique loot and shortcuts. More often than not, the player will discover entirely new paths through a level that can circumvent the tougher encounters and even sometimes sequence break the intended path.

Hellpoint's critical path is something that's not described to the player at great depth beyond a few introductory conversations with a sentient computer AI. The short answer is that the player is tasked with gathering data about the mysteries of Irid Novo, typically by slaying enemies or finding objects of interest throughout the world. However, the majority of the data players will need to synchronize comes from one of three main world bosses. Besting these bosses nets a fully 33% data sync, so you could effectively rush these bosses once you know their location and beat the game in only a few short hours. At the same time, I did enough exploration in my hunt for secrets that I achieved over 110% with only two of these main bosses defeated. Don't dwell too much on that number of three bosses, because there were still a lot of other minibosses scattered throughout Irid Novo that players might not ever find if they don't have an eagle eye for hunting secrets. 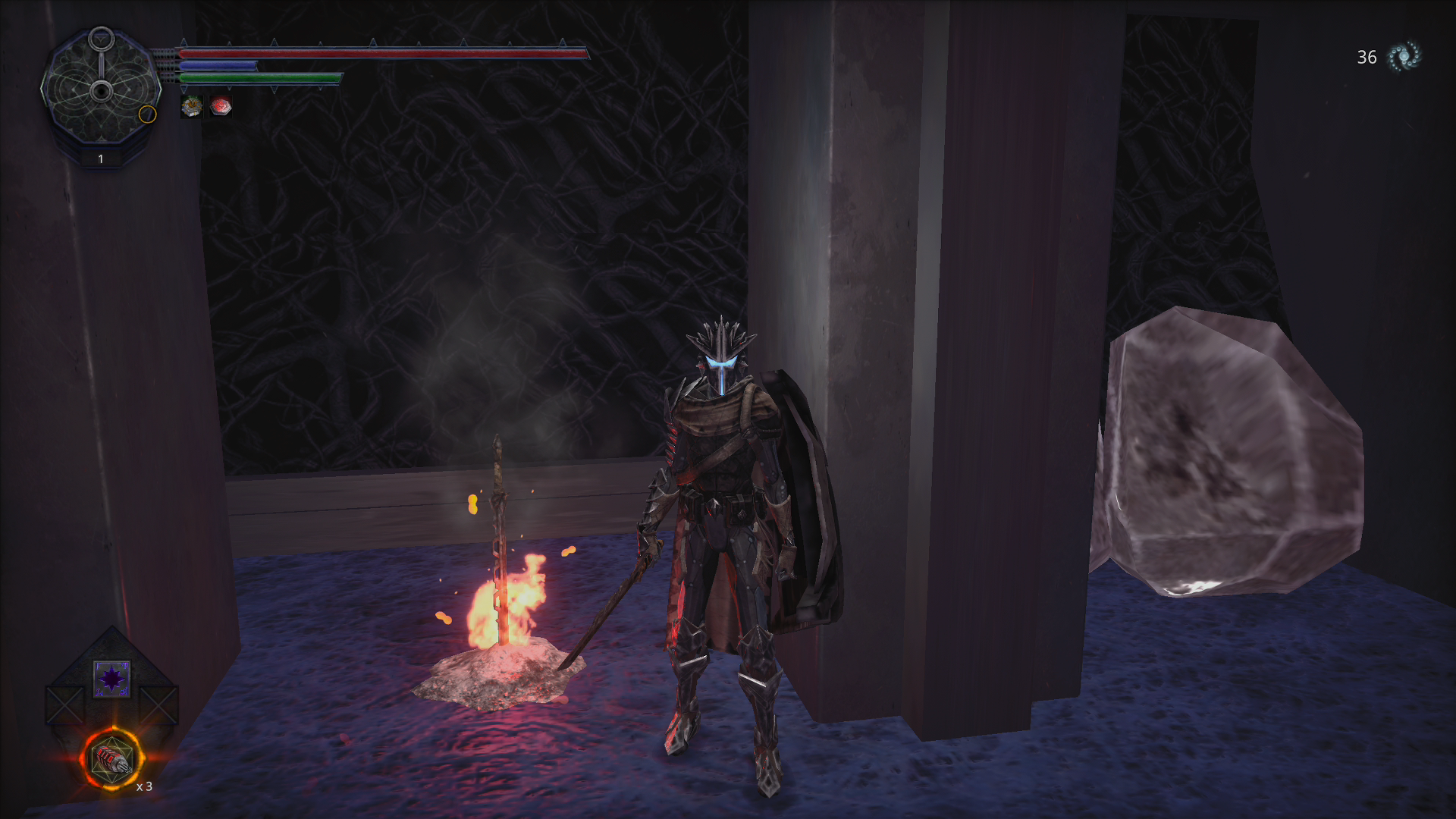 Honestly, I could go on and on about the secrets to Hellpoint as the single best feature to this Soulslike. That sense of wonder as I opened a secret door that leads into a hidden corridor and back up to an entirely different area was what kept me so interested in Hellpoint for so long. Even after finishing my first playthrough and taking out Hellpoint's final boss, there were so many boss trophies that I hadn't unlocked. It was during my continued playthrough (by loading a backup save) that I explored Irid Novo at greater length and found entire regions that I never found the first time around. In fact, there are a pair of sections to explore outside the station's airlocks and venture out in outer space that require a working space suit to survive, so finding that broken suit and the schematics to repair it are just one of many puzzles available to the player.

Many of the other puzzles are presented to the player by way of bits and pieces of information picked up through lore and environmental cues. By the time you find your first couple of secret doors, you start to recognize their general shape and can pick them out of a dimly lit corridor instead of simply mashing the activation key on every flat surface of the derelict space vessel. Others, such as quest chains for the few NPC's that aren't immediately out for blood, are a bit more explicitly described. While there's no Solaire clone that wants to help you survive through jolly cooperation, there are a number of other folks that can offer their services to help solve the mysteries of Irid Novo after a little assistance from the player.

If Hellpoint is to be remembered in the pantheon of Soulslikes, let it be for the exploration and secrets hidden throughout Irid Novo. The performance, regardless of platform, is a major sore spot for this ambitious action RPG and keeps it from being a much more recommendable experience. Nevertheless, Hellpoint is certainly up there in my favorite Soulslikes that didn't come directly from Miyazaki's teams and I can recommend it to anyone that's willing to put up with some jank for the sake of rewarding exploration.

Reviewed on PlayStation 4 Pro (code provided by the publisher). You can get it for PC at 20% off via Green Man Gaming.

Hellpoint is certainly cut from the all-too-familiar Souls cloth when it comes to character progression and combat, but it's the sense of exploration that makes this one Soulslike that shouldn't be missed.