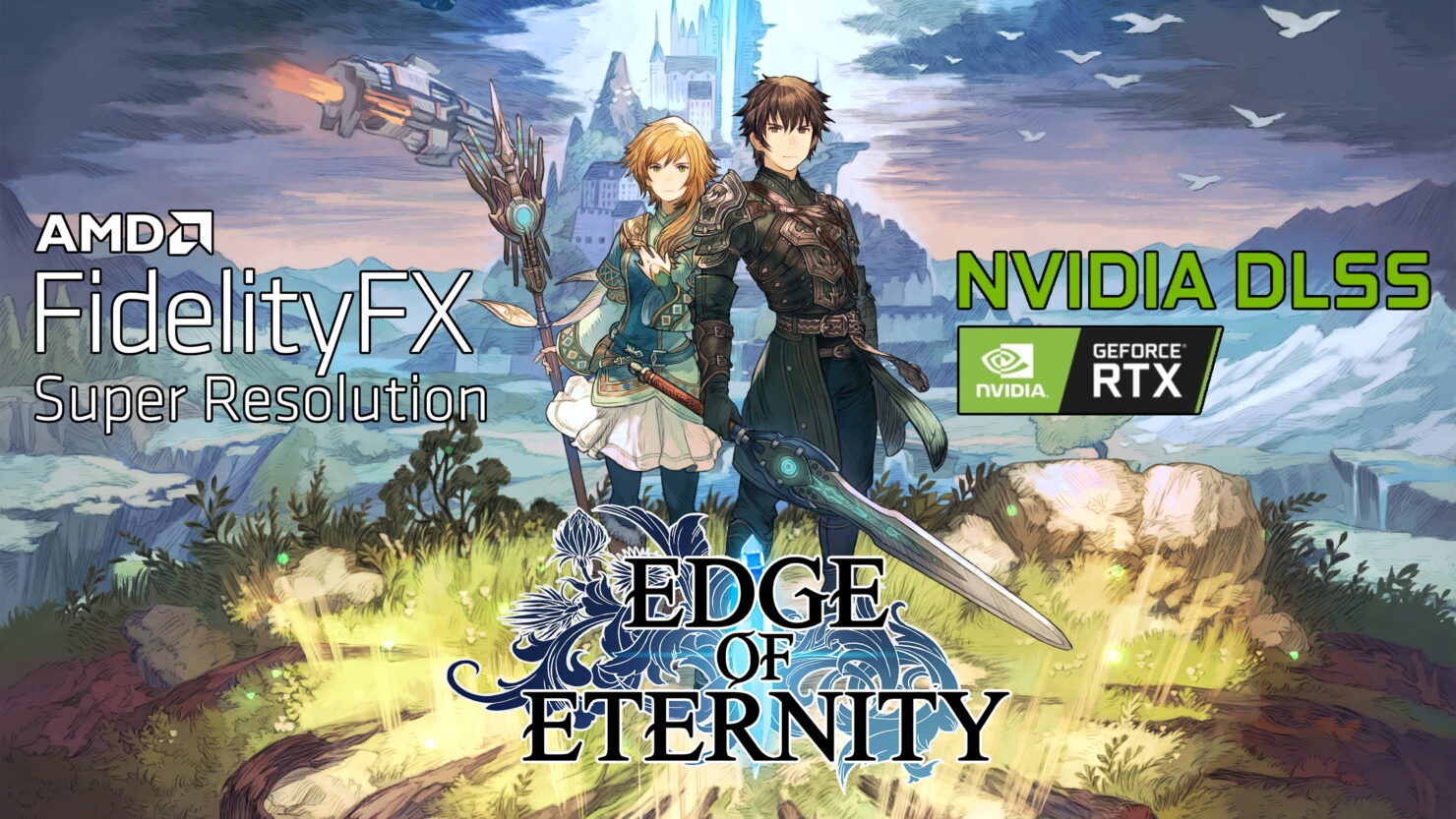 Western JRPG Edge of Eternity has been a long time coming. The game developed by Midgar Studio was originally funded via Kickstarter over six years ago, before entering Steam Early Access in December 2018.

Edge of Eternity recently launched on PC, at long last, with console versions due later this year. Given that the game is one of only two (the other being Necromunda: Hired Gun) confirmed to support both NVIDIA DLSS and AMD FSR technologies, we thought it was a great time to once again chat with Midgar Studio CEO Jérémy Zeler-Maury, who also happens to be the game's lead programmer.

We discussed the implementations of FSR and DLSS in Edge of Eternity, the usefulness of FSR on consoles, the strengths of next-generation platforms, and more. Enjoy!

Can you compare the process of implementing AMD's FSR and NVIDIA's DLSS in Edge of Eternity? Which differences did you encounter?

Implementing DLSS was quite complex to integrate into Unity for a small studio like us; it required tweaking the engine and creating an external plugin to bridge Unity and DLSS. It was complicated, but in the end, it gave amazing results. FSR, on the other hand, was very easy to implement, it only took me a few hours, requiring only simple data. However, it did require the source data to be as sharp as possible since FSR is not a deep learning method and cannot reconstruct loss details. We needed to replace the built-in Unity TAA with the AMD Cauldron TAA (opensource) that we ported to Unity as it is a lot better at preserving details.

Quality-wise, do you feel there is a noticeable difference between the two in your game? Also, do you expect many other developers to implement both technologies in their titles?

Quality-wise, when there is a lot of pixel info available for upscaling to 4K, both technologies give amazing results, and I have a hard time seeing differences between them. I’d even say that I slightly prefer the FSR for 4K resolution since it doesn’t introduce any artifacts/minor blurriness that DLSS can sometimes introduce. For lower resolutions like upscaling to 1080p or 720p, I think DLSS gives a better result since it can reconstruct parts of missing details due to the nature of the technique. That said, I'm playing Edge of Eternity on a GPD Win3 (Intel APU), and using FSR to upscale to 720p gives a very similar result to native on a small screen like that and allows 60 FPS gameplay.

I think FSR being very easy to integrate means more games are going to get it, DLSS is more complicated to integrate. Aside from pre-integrated versions in engine (UE already has it and it’s coming to Unity but only for HDRP, whereas our integration is for the built-in pipeline) or AAA games, I don’t think many small developers will integrate it.

A few years ago, during our first chat, you told me that the Xbox One version was running Edge of Eternity at just 720p and that you were worried about the performance of this system. Were there any changes since then? FSR has recently been confirmed to be working on Xbox One, too, so I'm wondering if you are looking into implementing it on consoles to help with performance.

We use FSR on every console version now to be able to improve the shading/assets density/resolution, thanks to being able to run internally at a lower resolution. I think FSR for consoles is really a must.

Does that mean FSR will be available in the same implementation on PS4 and PS5, too?

Yes. On consoles, we won't expose the settings directly as we do on PC, however. It will probably be hidden behind quality/performance toggles.

What do you think about next-generation consoles? Did they meet your pre-launch expectations in terms of hardware prowess?

The next-gen consoles are awesome. For indie developers, it gives us a CPU powerful enough so that we do not spend our time optimizing all little micro details to win a few milliseconds to reach the performance budget. The GPU is very powerful, too, but we are now expected to do 4K 60 FPS, and sometimes with raytracing it’s a real challenge for indie developers.

If you had to pick one outstanding hardware feature for the PS5 and one for the Xbox Series X, which would those be?

For the PS5, it is clearly the adaptive triggers combined with the advanced haptics. It really brings a new immersion level to games.

For the Xbox Series X, it is the support of DirectML. I don’t think it’s used much yet, but machine learning will allow awesome performance improvements (ML super-resolution), style transfer for new art styles, emerging gameplay, etc...

Can you share details on how the next-gen versions of Edge of Eternity will stack up to the maxed PC version? Will there be an option to choose between performance and quality, as in many recent games?

Next-gen versions of Edge of Eternity are on par with the maximum settings on PC running and upscaled to 4K with FSR in quality mode. There will probably be quality/performance settings even if it’s not 100% sure yet.

Back to the PC version of Edge of Eternity. Did you consider adding DirectX 12 support? Could this still happen post-launch, perhaps with some DX12 Ultimate features like ray tracing, sampler feedback, mesh shaders, or variable rate shading?

Unfortunately, the Unity DX12 implementation on the built-in pipeline is not solid enough. We have worse performance in DX12, and they made all the cool features available only for HDRP. Switching to this pipeline would basically require us redoing the project from scratch, so it’s very unlikely to happen.

Edge of Eternity took a rather long time to develop. As a team, what were the main takeaways from this project?

An active community is a developer’s most powerful ally. We wouldn’t have succeeded with such a big project if we had not released it in Early Access first. We thought at first that engaging with the community would have added a lot of pressure during the whole development, but thankfully it was the opposite. We quickly realised that our players were actually really understanding, so we decided to be as transparent with them as possible. The majority of their observations on the game helped us to refine which aspects needed the most attention. We were getting so much feedback that we had even set up a Google Form to collect our player's answers, and it has been a formidable guidance for us throughout the whole development.

Will you keep using the Unity engine for your next titles or consider switching to something else?

We’ll evaluate for the future depending on the project, but we’ll likely switch to Unreal Engine 5 in the future due to the open-source nature of the engine that allows us to modify it for our needs.