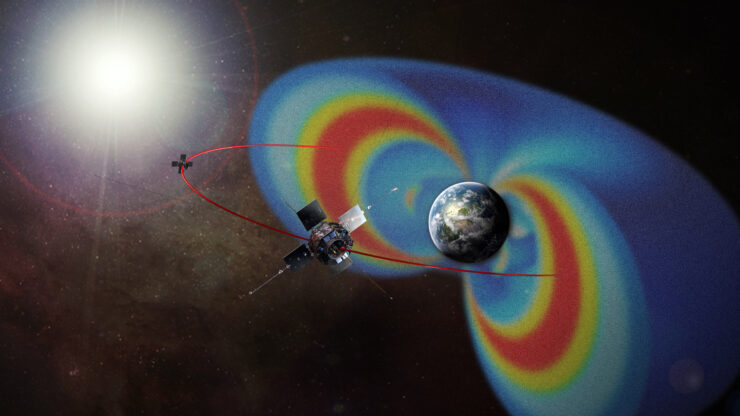 The Van Allen belt is made up of two radiation belts: the outer radiation belt and the inner radiation belt, sometimes a third external belt is formed depending upon the intensity of solar storms. Most of the particles were thought to come from solar winds and cosmic rays. The inner belt stretches from 640 to 9,600km above the surface of the Earth while the outer belt is ranged from 13,500 to 58,000km. The empty space between these two belts is known as the Slot Region which is mostly devoid of particles except when high solar activity is taking place.

The inner Van Allen belt occupied a large range of altitude. Till now it was thought that this inner belt was composed of high energy protons and high energy electrons known as relativistic electrons. This greatly affected the design of space crafts since a lot of money had to be spent in order to shield the craft from these high-energy particles.

In 2012, NASA launched two Van Allen Probes to work together with one another. The latest observations from these probes revealed that the high-energy electrons and protons are often entirely absent from the inner region. The MagEIS or the Magnetic Electron and Ion Spectrometer on the Van Allen probes allowed scientists to sort particles based on their energy and charge so a distinction can be made between relativistic electrons and high-energy protons. Being able to detect and distinguish between these two types of particles helps scientists to study how their amount varies over time.

"We've known for a long time that there are these really energetic protons in there, which can contaminate the measurements, but we've never had a good way to remove them from the measurements until now," says Seth Claudepierre, a Van Allen Probes scientist at the Aerospace Corporation in California.

"When we carefully process the data, and remove the contamination, we can see things that we've never been able to see before. These results are totally changing the way we think about the radiation belt at these energies."

The inner belt experiences fluctuations too

As of now it was believed that the outer belt was the one which would dramatically fluctuate in response to solar activity, while the inner belt had a stable composition. Now it has been declared that the inner belt experiences significant fluctuations too. Rather than being filled with relativistic electrons all the time the inner belt is composed of high-energy protons and low-energy electrons. The reason for the former view was that sometimes due to strong geomagnetic storms the high-energy particles were pushed from the outer belt through the Slot Region and into the inner belt and remained in the inner belt for periods that ranged from months to years, while the Slot Region was rid of these particles in tens of days.

By overestimating the intensity of high-energy particles in the inner belt and the amount of damaging radiation we were building bulky and expensive space crafts.

Now that we know that the Van Allen belt is a lot weaker than anticipated we can send space probes into these regions during low solar activity in order to observe our own cosmic backyard and explore the space which was previously avoided.

Shri Kanekal, a Van Allen probes scientist from NASA says,” This opens up the possibility of doing science that previously was not possible”. He also stated,” We can now investigate under what circumstances these electrons penetrate the inner region and see if more intense geomagnetic storms give electrons that are more intense or more energetic.”

This will open up new avenues in the field and is very useful information for scientists. Do let us know your comments about this new finding in the comments below.

Could We See Destiny On PC in the Near Future?