EA has made some pretty bold claims recently, inevitably setting of the Ultimate Showdown: 'EA Vs Activision' 'Battlefield VS Call of Duty'. And as the thunder rolls we feel the biggest problem for EA (Apart from beating COD) will be Bad Press ie. Reviews. To those who don't know this is because of the wide reports that EA tried to manipulate reviews of Battlefield 3 last time.

The thing is that Battlefield 3 turned out to be a damn impressive game and the apparent review manipulation that EA attempted (and later apologized for) only helped put a stigma on an otherwise amazing game. As the launch of Battlefield 4 comes closer and bold claims such as " we wont rest till COD* is beaten" make it clear that much is at stake. It is imperative for this reason that EA try to be as neutral as possible this time, or gain the automatic bias of the gaming community against it. Infact with an AAA title a little pressure is expected but to truly pull off the "no pressure" stance it must not do even that. The Ea Vs Activision showdown is nearing and alot is at stake for these two giants. Needless to say they cannot afford any more mistakes. Bad Reception at this stage could ruin or make EA. 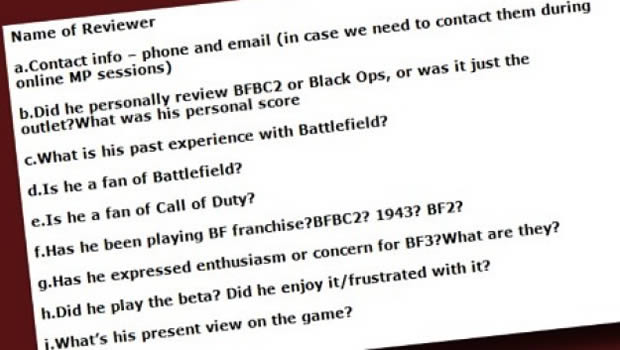 What NOT to do.

EA's Confidence and Previews show Battlefield 4 a force to be Reckoned with - The only hurdle left is good reception.

As far as anyone can tell, Battlefield 4 is all set to blow the competition away, with amazing tech demos, next gen graphical capability and sheer scope the only thing that stands in its way now are the critics. And while critics are supposed to be the epitome of fairness and critical appreciation, lingering emotions are not good. EA already had a pretty strict review copy policy. If EA hopes to truly make a positive impact, its PR needs to improve asap.

This battle is one with big stakeholders and both of the sides are going all out to get a win. With the hype about GTA V finally dying down, all eyes will be turned towards these two and how well this generation of the AAA titles do.