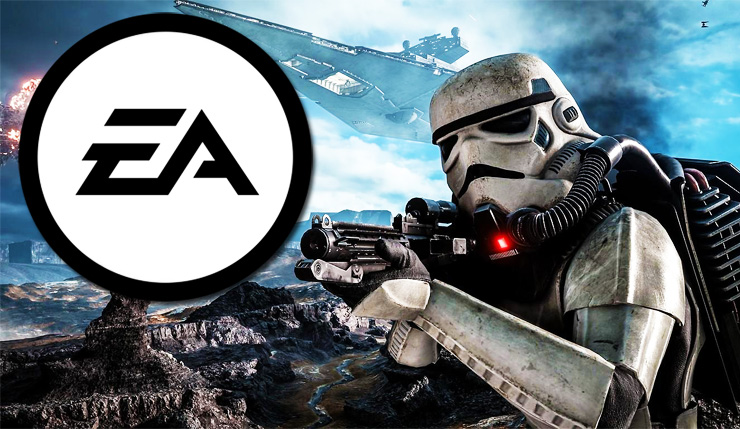 Electronic Arts (NASDAQ:EA) has posted a $186 million loss for the fiscal quarter ending December 31, resulting in a loss-per-share of 60 cents. Overall, earnings per share were $2.22, which was actually above Wall Street’s expectations of $2.18 per share. The mega publisher earned $1.16 billion in revenue in the third quarter, falling short of analyst expectations.

EA largely blamed their Q3 losses on a hefty one-time tax charge, but it’s clear the controversial launch of Star Wars Battlefront II didn’t help matters. As we previously reported, the game sold only 7 million copies during the quarter, 1 million below EA’s expectations, and far below the 13 million units 2015’s Star Wars Battlefront sold during its launch quarter.

The weakness of Battlefront II resulted in an 18 percent year on year Q3 decline in Packed Goods revenue to $380 million. Overall, net bookings were down $99 million to $1.971 billion, which was $29 million below EA’s guidance.

Digital Revenue to the Rescue

While traditional packaged game sales took a hit, Q3 digital revenue, which includes live services, digital game sales, and mobile, was up 14 percent to $780 million. Digital net bookings were $1.23 billion, up 12 percent over last year, with most of that money coming from those all-important live services, which were up a whopping 39 percent year on year. 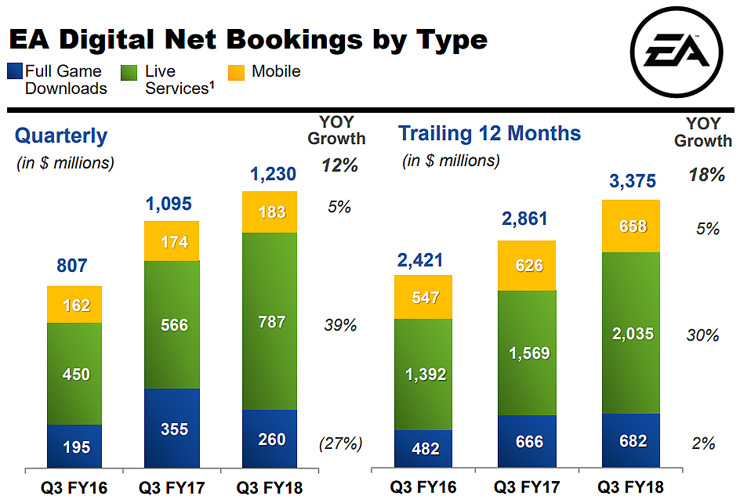 FIFA Ultimate Team continues to be a particularly crucial cornerstone for the publisher, with the community growing 12 percent in Q3 to 42 million players. The free-to-play FIFA Mobile is also doing very well for itself, adding 26 million new players this past quarter. With 2018 being a World Cup year, that FIFA cashflow should only increase.

Don’t expect the backlash against Star Wars Battlefront II’s ham-fisted monetization to have much effect on EA’s zeal for microtransactions and live services. EA is actually raising their full-year revenue guidance to $5.1 billion from $5.075 billion based on the strength of their digital business.

Looking ahead to Fiscal Year 2019, EA CEO Andrew Wilson promised to stay the course, with live services, a growing emphasis on esports, and big triple-A releases like Anthem and the next Battlefield title:

“Going forward, we believe that live services that include optional digital monetization, when done right, provide a very important element of choice that can extend and enhance the experience in our games. In FY19, we will push the boundaries even further for our players, with new experiences and innovation.

It’s a World Cup year, and our next FIFA. Madden NFL, NHL, and NBA Live will all bring new dimensions of gameplay, self-expression and social connection. The Battlefield universe will grow this year with our next Battlefield title, captivating longtime fans and new players alike, and adding to our Battlefield service where players can move seamlessly with their friends. Our new IP, Anthem, is a stunning project from BioWare that will blend genres with a shared-world experience that evolves around its players. We’ll grow in esports with competitions and broadcast content reaching more players and viewers, and continue to deliver for players through our live services – including Star Wars Battlefront II – with more great content for the games they love.”

Was Star Wars Battlefront II just a bump in the road? That’s certainly what EA would like us to believe. We’ll see how their strategy pans out over the coming months.