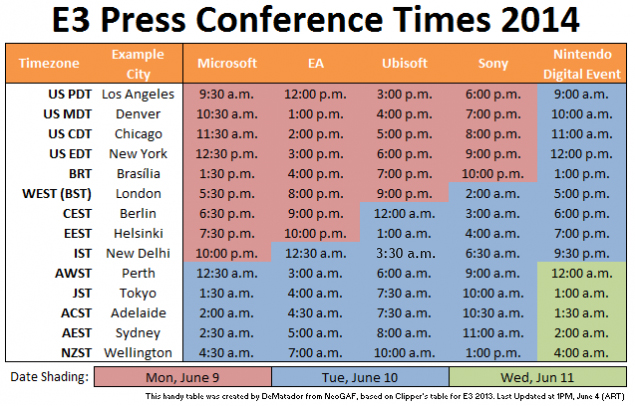 E3 2014 is an essential time for a lot of people, if you are to be prepared then you should have to be ready from all angles. If you are as enthusiastic as I am about this years E3 you better start memorizing the schedule religiously.First of all, As always I want to give a huge thanks to generous and intellectual folks at NeoGaf forums for compiling such a comprehensive and structured schedule. All credits go to This Thread. Lets get the time table out of the way that tells you the time zone of the main conferences (Sony, Microsoft, Ubisoft, EA and Nintendo). Confused on the schdule? Head on over to the respective links below to find out your local timings:

Now lets move on to the hourly schedule taken from IGN: (Bet you can't count the number of "Secret E3 Game" instances). All times are PDT; the schedule may change without notice.

Lastly, lets get to where you can see the live streams for various shows. (This will be updated as soon as I confirm Twitch / YouTube / Ustream channels for each respective studio)