[Update 2/8/2022] Techland has rolled out Dying Light 2 PC patch 1.04. The PC will be made available for consoles soon. We've included the release notes for this new hotfix down below:

Dear PC players, we've just released patch 1.0.4!
You can read the full patch notes on steam
(link in the comments)
We're working on the remaining tweaks for all platforms currently, we'll keep you updated - Thank you for your amazing support so far!#StayHuman #DyingLight2

[Original story] Developer Techland has outlined some of the changes and new features included with the upcoming Dying Light 2 patches across PC, PlayStation 4/5, and Xbox Series X|S.

Following the game’s launch last week, Techland already deployed several hotfixes for its open-world Zombie title. On Twitter, the Polish developer has now provided additional details about upcoming patches for the title, with the first new patch being planned for a release later this week.

On PC, an upcoming hotfix will offer DLSS improvements alongside fixes for various crashes. In addition, this patch aims to resolve an issue that could cause infinite black screens in various situations. Techland also shared that the team is working to resolve issues with key binding as well as fixes for story blocks, and visual bugs. In addition, a future patch will add backup saves and additional video settings. You’ll find an overview of the upcoming PC changes down below: 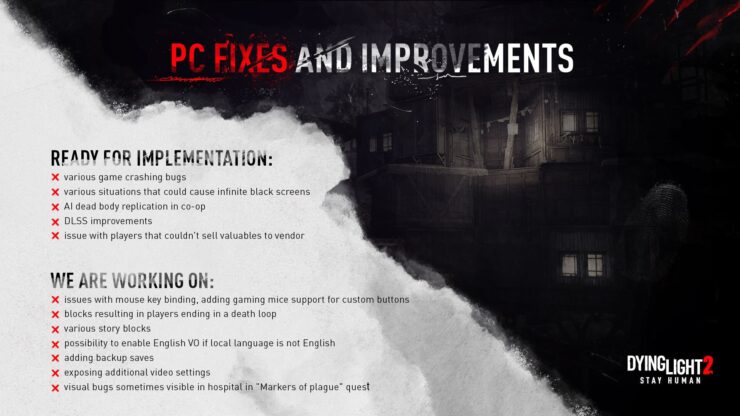 Meanwhile, on PlayStation, this week’s hotfix will address an issue that caused occasional screen flickering on PlayStation 5. This patch will also offer various performance optimizations in addition to fixes for crashes, balance improvements, AI Visual adjustments, and connection stability. We’ve included a list of changes coming to PlayStation platforms as well: 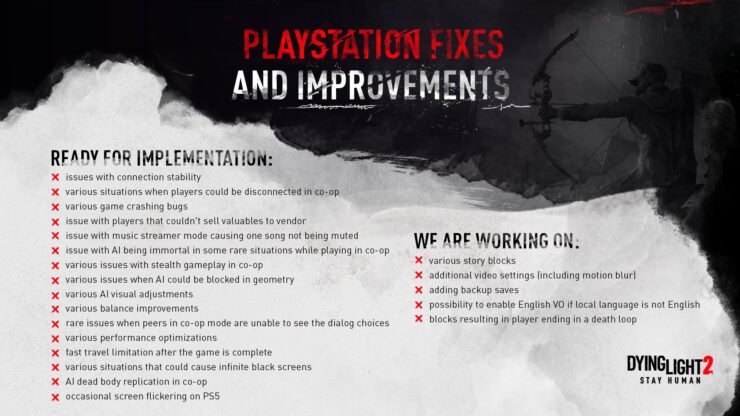 Xbox players playing Dying Light 2 on Xbox Series X will be happy to learn that this week’s new patch will enable a 60+ FPS Variable Refresh Rate (VRR) mode. Like the upcoming hotfix for PlayStation platforms, the upcoming Xbox patch will also address issues with connection stability, game crashes, and infinite black screens. In addition, among many other fixes, the new update will fix various issues when AI could be blocked in geometry. Check out the list of changes and improvements for Xbox platforms down below: 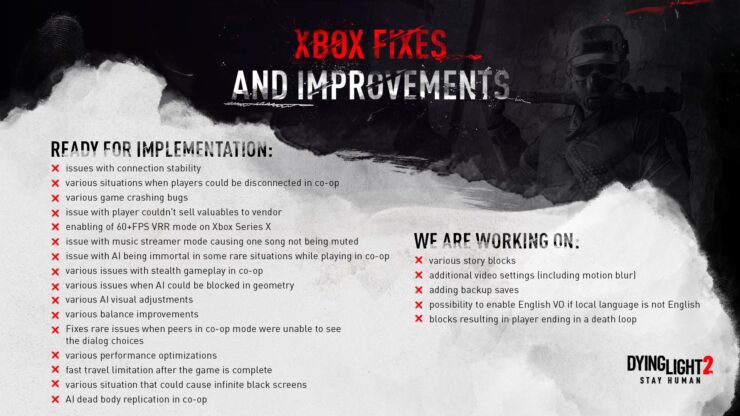 Dying Light 2: Stay Human is available globally now for PC, PlayStation 5, PlayStation 4, Xbox Series X|S, and Xbox One. Be sure to check out our review in case you haven’t done so yet.