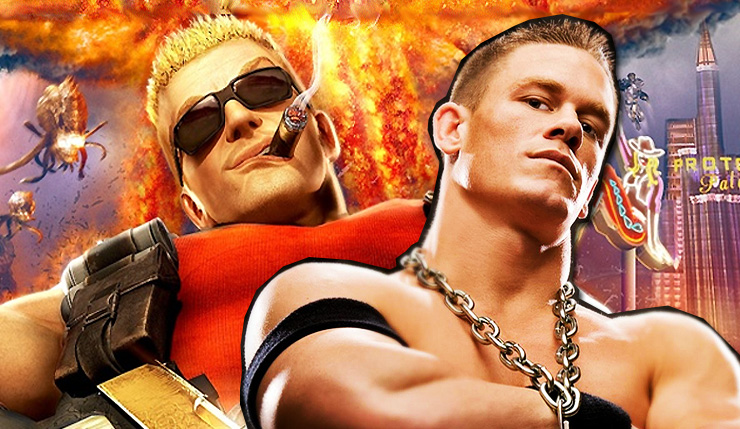 Yes, that’s title is real. It’s time to Never Give Up™ chewing bubble gum and kicking ass, because WWE’s John Cena is reportedly in talks to star in a Duke Nukem movie.

According to The Hollywood Reporter, the Duke Nukem flick will be produced by Michael Bay’s company Platinum Dunes and will be distributed by Paramount. The movie, which is being specifically developed for Cena, doesn’t have a writer, director, or release date yet.

John Cena as Duke Nukem is pretty much perfect casting. I mean, John Cena is basically a real-life Duke Nukem – a jacked-up, ultra-macho, flat-topped superman, who won’t stop spouting cheesy jokes and pop culture references. The only significant difference between the two is the length of their pants – John is a jorts man, while Duke does his thing in dad jeans. So yeah, great casting, but, that aside, is a Duke Nukem movie a good idea? The franchise peaked a good couple decades ago, although you could say the same thing about the WWE.

A Duke Nukem movie has been in the works in some form since the late-90s, but, until now, plans have always fallen through. Duke will actually be making his big-screen debut this year in Steven Spielberg’s Ready Player One, in which he has a small, background cameo.

Duke Nukem isn’t the only old video game being revived by an ex-WWE Champion. Rampage, starring Dwayne “The Rock” Johnson, arrives in theaters on April 20. Is this the beginning of a trend? What other neglected gaming franchises could be revived by pro wrestlers? Contra starring Roman Reigns? Karnov starring Rusev? Final Fight starring a mustachioed Brock Lesnar as Mike Haggar? Actually, those are all great ideas – make ‘em happen, Hollywood.

What do you think? What kind of video game/WWE big screen tag teams would you like to see?